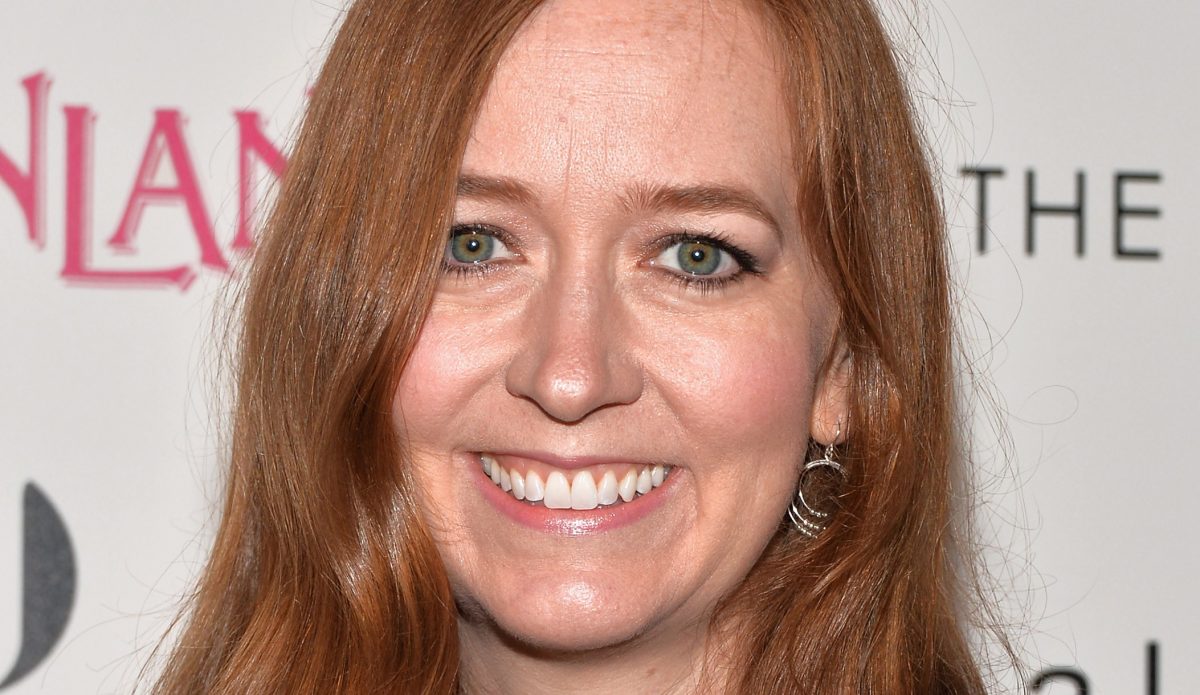 Author and Salt Lake City, UT native Shannon Hale was invited to be a guest at SLC’s FanX, formerly known as Salt Lake Comic Con, but she had reservations regarding the show’s anti-harassment policy, or lack thereof. So, she expressed them. How she was treated by FanX was unacceptable, and the show’s been back-pedaling ever since.

Hale, who’s the author of our fave Squirrel Girl graphic novels among other best-sellers, reached out to FanX co-founder Bryan Brandenburg privately, expressing concerns over reports of harassment at the con, including alleged sexual misconduct by author Richard Paul Evans, which was brought to the attention of FanX and ignored.

Meanwhile, in an interview Evans did when the complaints were first made public, he dismissed them, basically blaming Utah’s women for being stiff, saying “I kissed a woman on the cheek. This is something we did in church for two years, twenty/thirty times a day in Italy. And it’s like, it’s just habit, I do it with my friends here. I do it with my friends back East. And Utah– they are a little bit stiff about that. I did it, won’t do it again. It obviously caused a problem with this woman.”

The fact that this guy can’t distinguish between following a culture’s lead when visiting their country or what people he knows will allow him to do and how to interact with strangers boggles my mind.

Be that as it may, it isn’t about him, or any of the others accused of sexual harassment. It’s about FanX’s handling of those complaints. In the most sexist and condescending way possible, Brandenberg wrote back to Hale basically telling her to not worry her pretty little head over it. She posted a portion of the interaction on Twitter:

Disappointed with the way an organization has publicly handled a sexual harassment accusation, I’ve been communicating with them privately, hoping they’d step up. Just got an email response. Please play sexism bingo with this paragraph. pic.twitter.com/PT1J0rMsFU

Brandenberg wrote: “Maybe it’s best if you sit this one out and then wait to hear how it went. I don’t think there’s anything we can say to convince you to come and quite frankly I’m not willing to try. I know in my heart that we take this seriously and I don’t think you get it. I have four daughters and have been sensitive to these issues for decades, long before it became trendy with #metoo.”

Ah yes, the ol’ I have black friends, so I can’t be racist! Or, I’m related to women so I can’t be sexist defense. Guess what? EVERY SEXIST HAS WOMEN IN THEIR LIFE! IT’S IMPOSSIBLE NOT TO. THAT DOESN’T MAKE YOU EXEMPT FROM BEING GUILTY OF SEXIST ACTIONS.

Even worse than this initial sexist condescension was the tweet from FanX that followed once Hale made her interaction public. The FanX tweet has since been deleted, but the Internet is forever, after all, and Hale screencapped it, sharing that one, too:

This is what @fanxsaltlake does to a woman who publicly speaks up about harassment at their con: publishes her email without redacting her private email address (I did that on this screenshot) but deletes the parts of the email that makes them look bad pic.twitter.com/8m2dgwtm9P

Hale stresses that she has never personally experienced harassment at this particular con, but that she knows and has heard of plenty of people who have; women who haven’t felt comfortable doing so publicly, and so Hale is speaking up on their behalf:

I’m glad it’s all coming out, but selfishly I wish it wasn’t coming out over me. I’d rather not. I’ve done 3 interviews now because this is an important topic and I want the truth out.

I hope this is just one example and shines a light on a larger culture that enables and supports harassers and ignores and belittles women. Once we see it, we can change it.

I will never come close to being as brave and amazing as the protesters in Ferguson. But they inspire me. Sometimes we have to put ourselves out there and take the hit so that others can see the truth.

There are A LOT of women who have spoken up privately but don’t feel safe to speak up publicly. Those of us speaking publicly are doing so because we can. We have that privilege. But really, everything we do is for them.

And Hale is certainly not the only one. Authors have begun pulling out of their upcoming appearances at FanX, and have been speaking up in support of the women whose complaints have been ignored by the con, as well as in favor of an updated, comprehensive, and enforced anti-harassment policy. Authors like Jessica Day George and Bree Despain have been corresponding with FanX in a similar fashion to Hale for months with no movement. Without even so much as a “yes, we will definitely enforce our (pretty weak) anti-harassment policy.”

For example, click through on this thread from author Ally Condie where she gives a thorough, behind-the-scenes perspective:

For months, authors have been asking for a better sexual harassment policy from @fanxsaltlake. What happened publicly today on twitter is an indication of how women have been treated privately by those running this con. https://t.co/lJeYb30dC9

And the guests an participants are dropping like flies:

In light of today’s events, I will no longer be attending @fanxsaltlake . I am truly, truly sorry to every #RWBY lovely who was planning to say hi. I hope that I can find you at another convention, and thank you so much for watching! ❤️

Ahhh here is a con I won’t be going to any time soon. Unacceptable @fanxsaltlake. https://t.co/orvOZ3F6nT

I have withdrawn my acceptance and will not attend FanX this year as previously announced. I look forward to their response to this clear breach of @haleshannon’s privacy rights and near certain violation of their newly-minted harassment policy regarding confidentiality. https://t.co/N1nlNUxU8y

I’ve been watching this unfold for months (one of RPE’s victims is my friend), waiting for @fanxsaltlake‘s updated harassment policy and hoping to see change within the con where I’ve been a panelist for years. This thread summarizes everything I feel today. Count me out, FanX. https://t.co/DimPldpSQi

These authors are encouraging the Film and TV celebrity guests to follow suit to really make FanX sit up and take notice.

As it stands, Brandenberg issued the following statement last night, apologizing both for handling the initial complaints of harassment, then to Hale for how she was treated:

I made multiple mistakes in handling the report of harassment at our event. I was insensitive to people that were communicating to me about this issue. It was me and me alone that responded to one of the people involved and I handled it terribly. I am so sorry. I wish I could take it back but I can’t. I was wrong, I made more than one mistake, and it was a very painful lesson. I’m ashamed that I didn’t handle it better and I hope that I can be forgiven. I’m so sorry that I came across like I did. Please forgive me.

I would like to apologize to Shannon Hale for the events that happened on Twitter today, and my overall handling of the reports of harassment from our last event. In an overly emotional state, I took to social media in response to a tweet that quoted an email exchange between the two of us. In doing so, I didn’t notice my screenshot still contained her personal email. This was overlooked and not meant maliciously.

In response to my poorly chosen words about the #metoo movement being “trendy”, I came off insensitive to people’s pain, and I am sorry. After today’s events, I admit that I am not fully aware or educated about the importance of the #metoo movement, and this is something I am actively working to change. I need to improve on listening and making people feel validated.

Everyone working at FanX, including Dan and I, are still learning how to communicate about this serious and very important topic and to understand the sensitivity and different perspectives that come along with it. As a team, we want to learn how to do better.

Moving forward, our goal is to create a safe environment for everyone. Training for staff will happen within the next 90 days, so we are equipped to handle sexual harassment and assault reports. Our new harassment policy now includes instructions on how to report an incident anonymously or in person. It also clearly states the sanctions that will be taken when a report comes in.

The harassment policy also includes more defined behavior expectations for our attendees, guests, agents, cosplayers, panelists, moderators, staff, vendors, vendor models, and volunteers. Consent is key. These improvements would not have happened without your voice.

I wonder how many people it took to help him draft this. I also wonder what magically changed in the mere days between his initial response to Hale that had him go from someone who ignored complaints for months to someone who’s oh so penitent. That’s right. Bad publicity.

Apologies like this are great and all, but they’re no replacement for concrete action and for genuinely listening, rather than putting on a show of listening only to be a hypocrite later. FanX still has a long way to go if it expects to earn back the trust of fans and guests alike, and conventions all across the country need to understand that women’s safety is non-negotiable, and if your con can’t guarantee that, fans will reserve their hard-earned dollars for those that can.

What continues to be great are people like Hale, Condie, and all the other women (and male allies!) who have stood up, not for themselves, but for those who have been victimized. This is what we should all be doing for each other.