Yes that is Arthur Darvill. You're welcome. 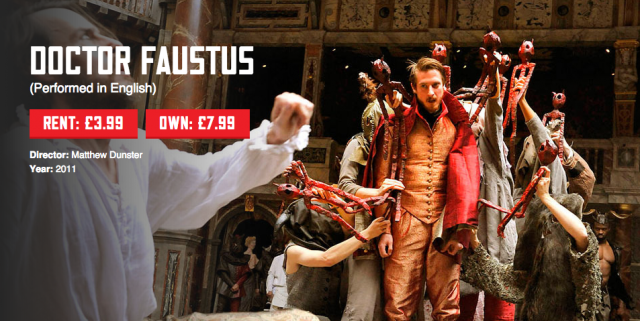 Back in the day, if you wanted to watch a Shakespeare play—or any work of Elizabethan-era theater, really—you had to schlep yourself over to a disgusting outdoor theater and, unless you could afford the exorbitant costs for seats. stand with a bunch of other plebes in a tightly packed standing-room-only gravel pit. But we live in the future now, where we can stream those plays directly into our eyeballs via magic screens! Isn’t life amazing?

Okay, I kid; seeing a play live at Shakespeare’s Globe is a pretty amazing experience whether you’re standing or not. Unfortunately, flights to London are a bit expensive these days, so for the rest of us, the theater has released an On-Demand service called the Globe Player, which allows you to watch past productions online, as well as free-to-watch interviews with celebrated actors like Ewan McGregor and Judi Dench, and a larger number of translated works from the theater’s Globe to Globe festival. Ever wanted to watch Coriolanus in Japanese, or All’s Well that Ends Well in Guajarati? Now’s your chance.

But it’s not all Shakespeare down at the Globe! You can also treat yourself to a screening of Christopher Marlowe’s Doctor Faustus that stars none other than Pond-Husband Arthur Darvill as Mephistopheles. That’s right, Rory was the devil one time! Here, let this overdramatic trailer show you what you’re missing.

Filming live play performances and then putting them up online is not actually an uncommon practice in the UK—the Digital Theatre website offers a lot of productions that star famous actors, such as David Tennant and Catherine Tate’s Much Ado About Nothing or Richard Armitage in The Crucible. Heck, they’ve even got a fair number of the productions that the Globe’s new service also features. But as Globe artistic director Dominic Dromgoole said on Tuesdsay, the Globe is the first theater with “its own dedicated video-on-demand platform,” and that it will be able to “take Shakespeare out into the world and share his astonishing plays with as many people as possible.”

Personally I would recommend Henry IV part 1 and 2, as I saw both those productions live back in 2010 (and it’s worth pointing out that they cast the same guy who plays Hal as the king in a later production of Henry V—yay, continuity!). Is there anything else on the Globe Player that you’re dying to see?