Getting Under The Covers With Sex Criminals

Start reading this amazing comic ASAP with the help of our primer! 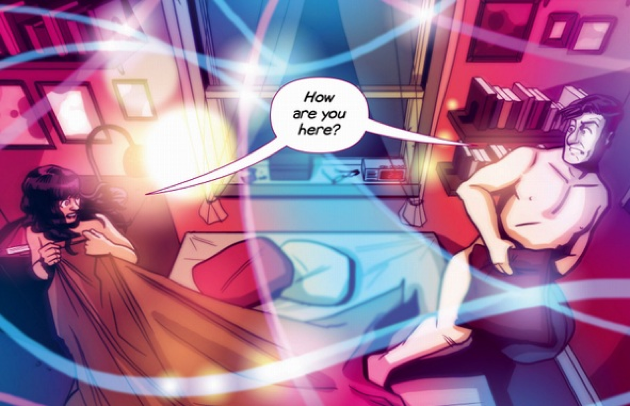 Sex Criminals was on pretty much everyone’s “Best Comics of 2014” lists. Is it perfect? No, because it’s not Chris Evans’ buns. Is it worth dipping into? Yes, much like Chris Evans’ buns, it really is. It’s Matt Fraction and Chip Zdarsky, mainstream writers doing something a little different in comics. It’s a tale where the superpowers are very much adult-oriented – because their power comes from orgasms. Don’t expect much in the way of titillation here, though; the sex depicted isn’t movie perfect, nor is it straightforward. It’s sweet and gross, meaningless and vital, hurtful and empowering. It’s sex as it really is: complex.

If you haven’t been reading Sex Criminals, you can pick up Volume 1 and try to get your hands on issues #6-10. If that’s entirely too much for you, we understand – so we’ve made you this quick little primer. This article won’t totally spoil Sex Criminals, but it will spread wide (heh) a lot of the book’s secret delights (heh heh). I promise you lots more sex puns ahead – the article won’t be hard to read, and it will be over in an average of seven minutes. Wink wink nudge nudge.

One of the first comics I ever read was Omaha The Cat Dancer, a sexy and political comic that started back in 1984. I have quite the sordid history with sexy comics, but lets move on before questions are asked. When I first heard about SC, I found myself looking forward to reading Matt “I got my nipples pierced on stage” Fraction’s latest comic. Usually I wait for the trade paperbacks, but I bought issues of SC while the ink was shiny and wet from Image.

I immediately fell in love with SC’s two main protagonists, Suze and Jon. They both have an unusual talent which is central to the premise: when they orgasm, time stops, and they enter what Suze calls “The Quiet.” I should really say time stops for them, as they can both still move around while everything else is otherwise frozen. This allows them to read a book, go for a walk outside naked, have personal space or, you know… rob a bank. Time remains suspended as long as orgasm-er isn’t yet ready for round two. Once they are, they drop out of The Quiet and the world going back to normal once more.

As a comic SC, is genre spanning. I’ve heard it called erotica, but I would have to disagree; erotica is sexy. The sex in Sex Criminals is a functional means to a fixed end. (Remember, readers, unlike Suze and Jon, sex doesn’t have to be about “goals” to be good. It also does not have to actually freeze time.) SC also isn’t what I would call explicit; you get to see boobs and occasionally an ass or two, but the only penis is hidden away behind a glow. The sex is sanitized, Hollywood-style, and you don’t get the ins and outs of what’s taking place. So if this isn’t comic book erotica, then what the deuce is it?

Sex Criminals is actually a complex mix, but it’s primarily humorous, with a few real laugh-out-loud gags. It’s self aware and fourth-wall breaking; issue one opens with Suze talking directly to the reader and joking away. Quickly, though, the story covers Suze discovering her talent, and how it became a refuge from her declining home life. The main characters in SC are nicely complex; Suze’s story arc runs from her initially struggling to learn about sex, to navigating an adult sexual relationship, and all while attempting to save her beloved library. SC is, on the surface, a story about a heist and revenge; but, more than that, it’s about learning about ourselves as sexual creatures, and discovering both sexual and societal freedom. It’s about authoritarianism and redemption, as characters own up to and learn from their past mistakes, while others try to keep them in line.

This is still a comic, though, and SC can also be read as a superhero story, complete with alter egos, costumed villains, and super-technology (like the “Cumpass,” a device that reveals the location of people who orgasm into The Quiet). The superpowers, at least so far, are restricted to orgasms, social position, and money. Suze and Jon navigate this world with all the skills of a virgin putting on a condom, and they tend to blunder into events with no long-term plan.

In an attempt to save Suze’s library, Jon says they should rob the bank that he works for. Suze’s roommate Rachel overhears their plan and tries to contact the police – but instead contacts the head of the Sex Police. The trio of Sex Police are the villains, the self-appointed guardians of The Quiet, and apply their own form of justice to anyone who commits what they define as a crime while in The Quiet. The Sex Police (lead by a woman affectionately known as Kegel Face) try and warn off our protagonists, but Suze and Jon commit the bank robbery anyway, and get caught in the act by these self-appointed “cops.” Our protagonists escape “arrest” by accidentally exciting one of the Sex Police, causing her to drop out of The Quiet. And so ends Sex Criminals’ first arc.

The second story arc begins with issue #6, which will also become the start of Volume Two. This time, we are more focused on Jon. He’s potentially more problematic than Suze, and SC becomes a little darker when Jon takes over the narration. The younger Jon had a chronic masturbation addiction, which led to a lot of time in The Quiet (or “cumworld,” as he so imaginatively called it). As an adult he has various mental illnesses, including ADHD and oppositional defiant disorder. Jon, however, doesn’t want to take medication to damp these problems down – because the meds damp everything else down, too. On his medication, Jon can’t feel life, and everything becomes distance to him, and he uses this as the blame for the end of his last relationship

As he is not on his meds, the emotional distress from the heist, the Sex Police and his new relationship causes Jon to suffer from paranoia and mania. Mental health is a serious topic, but it’s not depicted without humor in SC, as Jon takes revenge on his boss by pooping in his potted plant on a daily basis. Yes, be warned, this comic has non-consensual scat play with plants. SC may penetrate deeply (heh), but it’s also genuinely amusing, I particularly loved Suze’s non-performance of Queen’s ‘Fat Bottomed Girls’; like Matt’s protagonists, the jokes keep coming.

Suze and Jon split up, as trying to deal with their burgeoning relationship on top of the hassles of the Sex Police and the library proves too much. It’s the last straw for Jon, who skirmishes with the Sex Police and steals a lot of the information they had stashed away in their sex dungeon. After this short break in their relationship, Jon and Suze discover that quite a few other people can enter The Quiet too – and they start seeking these people out.

My complaints about SC are a little bit nitpicky, and nothing to put anyone off. The art varies a little bit in quality, like the first misfire you have with a partner at one end of the spectrum to the bliss of achieving the multi-O at the other. The facial expressions by fellow Canadian Chip Zdarsky should be singled out for particular praise; they are simply wonderful. The computer-coloured effects delineating The Quiet can be a little heavy-handed, but luckily it doesn’t detract very much.

SC does, however, suffer from a lack of diversity. So far, they’ve only had fit, straight white people doing the horizontal job. There is a tiny nod to Jon “experimenting” with another guy, but on the whole, SC is very heteronormative. I’d like to see a more diverse cast doing different things as the story moves forward. I have some hopes for the Richard Rainbow character, so I hope he doesn’t vanish. I do understand that the story is focused on Suzee and Jon, but room for improvement exists for sure.

Regardless, go buy Issue #10 of Sex Criminals, now that you’re all caught up. It’s getting awards and recognition for good reason.