How Sense8 Quietly Became the Best LGBTQIA Representation on TV

"Four people just had sex, but maybe they didn’t, and now I don’t know how I feel." 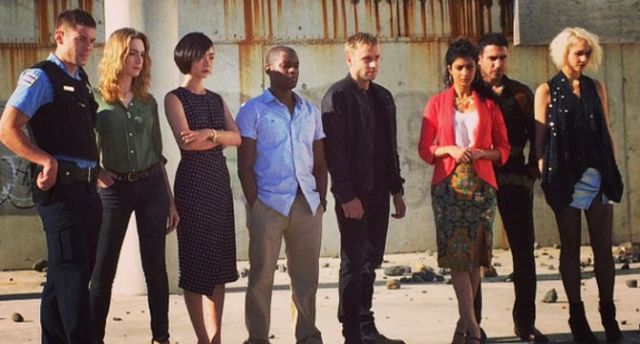 While enticing, Netflix’s promotions for Sense8 didn’t get me watching. Nor did the flood of gifs from Twitter and Tumblr: fireworks shows, grenade launchers, Sayid from Lost, and another guy who had apparently lost his flip flop and needed Hernando to help him find it.

It was one text post about the series’ excellent diversity—with respect to one aspect in particular—and the many posts that would follow it.

Four people were making love onscreen. On TV. Correction: it was more like six people, but two were sharing the experience with members of their empathic “cluster.”

It was literally hive-mind meets cluster-fuck. (Yeah, I said it.)

Back in June, Netflix premiered its inventive new series that follows eight individuals from around the world. Known as “Sensates,” these heightened humans operate in groups or clusters, transcending language, culture, ability, and potentially death by sharing body and consciousness.

Sense8 functions as critical mass sci-fi, offering intense action sequences, intricate mythology, stunning cinematography, and affecting themes—not to mention an incredibly diverse cast. The show’s characters are from seven different countries on four continents who speak six different languages. And if that wasn’t enough for series showrunners Andy and Lana Wachowski (Matrix trilogy) and J. Michael Straczynski (Babylon 5), they’ve also managed an equal male to female lead ratio in addition to featuring gay, lesbian, and trans characters in key roles. Talk about painting with all the colors of the wind.

That spectrum is leagues ahead of most other programming, especially regarding gender and sexual orientation. The biggest and most interesting aspect of sexuality on the show, however, wasn’t revealed on-screen. When a fan on Twitter asked series star Brian J. Smith whether or not he believed his character, Will Gorski, was bisexual, Smith replied, “Lana thinks all the characters are pan-sexual, I think that’s a great way of putting it.”

For those who are unfamiliar, pansexuality is sexual attraction to people of all—or irrespective of—genders. So logically speaking, the cluster taking on this orientation makes the most sense.

Per story canon, a sensate can “be” with a fellow cluster member in two ways: visiting and sharing. Visiting incorporates visual projections of each other and communicating through their own consciousness. Sharing, on the other hand, is when one sensate occupies the body of another.

In one of the series’ most famous scenes, characters living at opposite ends of the gay-straight binary engage beyond their understood orientations. Some cluster members flow in and out of the bodies of their mates, while others share in the sensual experience. Everyone involved is aware of what’s happening and willingly participates, as evidenced by several post-scene reactions. The scene is a perfect example of how once the cluster connects, they share their lives in almost every way, including their own sexuality.

As the series progresses, the writing becomes clearer on the physiology of the cluster’s nervous system. From this, we are able to understand how shared moments, like the famous one in episode six, can take place. And yet, after that scene, the issue of attraction among the eight sensates isn’t formally addressed again until the very last episode.

That moment, albeit hilarious, confirms that the experience and sharing principle are very real. It also shatters any idea that the eight leads’ sexualities can exist the way they once did. Each and every one of them—irrespective of their interest’s gender—is now pansexual. Even Will “OH! … Ehh … Umm … Heeey” Gorski.

Coupled with Smith’s tweet, it provides not just a concrete answer to the question of the cluster’s sexuality, but raises a more interesting one in the process. Could the sensates have more than one orientation?

Each of the characters begins the series with a certain experience. After their “merge,” it morphs to fit their shared existence. But what about those feelings pre-merge? Are they invalidated by the link within the cluster? That doesn’t feel in line with the show’s stance on identity. Sense8 appears to be driving home that their individuality and differences, at least in part, can make the group’s connection stronger.

What could help explain their pre-cluster disposition is the exploration of romantic orientations. While each of the characters can be sexually attracted to anyone, they may not find themselves romantically attracted to everyone. Instead, the sensates might identify as being interested in the opposite (heteroromantic) or the same (homoromantic) gender, and even two (biromantic), all (panromantic), or no (aromantic) genders.

Sense8 seems to be going to infinity and beyond in its exploration of how attraction and sex function as part of the human experience. So, why shouldn’t it go one step further? Not only do the sensates create an opportunity to expose general audiences to an often ignored, unexplained, and underrepresented sexual orientation, but they have a serious chance to introduce the public to another aspect of attraction.

It also creates a win-win scenario in terms of the series LGBTQIA representation. We live in a culture that frequently presents us with negative or less than realistic portrayals of gay and lesbian characters. In come Lito Rodriguez (Miguel Ángel Silvestre) and Nomi Marks (Jamie Clayton), two sensates whose personal development is literally as good as—if not better than—their perceivably heterosexual counterparts. They’re also in relationships with partners who are portrayed and developed as authentically as they are.

Although pansexuality isn’t straight-washing, it is a diversion from the power of those positive gay and lesbian representations. I can acknowledge this, even as a pansexual elated at finally having some of my own realistic media representation. Inadvertently, it also ignores something mentioned before: How does anything that’s seemingly so concrete for the series’ characters suddenly just … expand?

Lito and Nomi were explicitly attracted to men and women before their cluster was activated. So if the cluster identifies their orientation as pansexual and individual romantic orientations as otherwise, it can easily explain why they were only attracted to and/or in romantic-based relationships with people of the same sex before. This goes for the show’s presumably straight cluster couples as well.

Even more wonderfully, for characters whose sexual or romantic orientations were not explored to the same extent within their own storylines (Sun and Capheus), acknowledging individual romantic orientations increases the possibility of seeing even more diverse representations of sexuality, including the aforementioned.

Regardless of how the issue is explored on the show going forward, Sense8’s first season has made media history. Though a variety of gay and lesbian, and to a far lesser extent trans, characters have existed on screen for some time, pansexuality has remained very much invisible. I can think of only one canonically confirmed pansexual character from the small screen, Torchwood’s Jack Harkness. Sense8 is offering us two handfuls.

Each of the sensates transcends stereotypes, illustrating that there is not one way a pansexual looks, acts, or loves. They also solidify that sexuality can be complicated, and that the gender of your partner defines neither your orientation or your worth. And with off-screen confirmation, Sense8 would also mark the first time this number of queer characters’ sexualities didn’t rest at the center of their development on a show.

The series deserves all the praise in the world for its nuanced and realistic portrayals of trans and homosexual characters, its audacity to explore sexual identity outside the general binary, and even for the potential to acknowledge romantic orientation. Still, for Sense8 to truly solidify itself as a pioneer, there is one very important thing it must do. Say it on screen.

In a heteronormative culture, people are considered straight until proven otherwise. That means the series shouldn’t shy away from addressing the characters’ new identities. Without being willing to say that all eight of its leads are pansexual, the impact of the series’ choice could be lost.

Abbey White (a.k.a. con by day, binge by night) is currently in the weird in-between of a post-bacc journalism program and grad school. She has only two requirements to meet her definition of “decent tv”: characters with high drift compatibility and a massive amount of monster metaphors. Abbey has written regularly for ScreenSpy, and contributed to Popwrapped and TV Overmind. You can find her on twitter at @tearsandteeth.