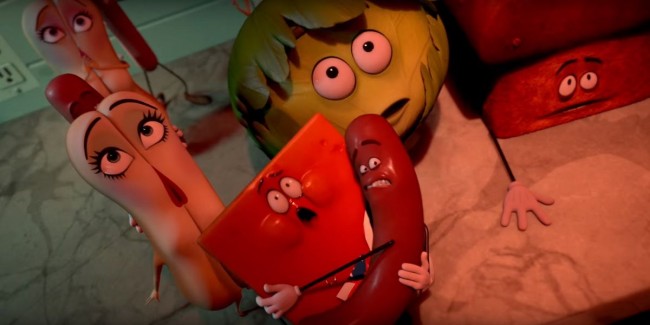 Sausage Party—you know, that 90 minute long dick joke movie that we all thought wasn’t real—has apparently slighted its animators in a big, big way. Nitrogen Studios, the studio behind the movie, now finds itself in a bit of hot water as thirty animators have signed a letter accusing the studio of failing to pay them their overtime wages. They allege that they have, in essence, worked for free to get the movie made on time. This moves a bit further beyond the pale in that the animators also accuse folks within the studio of pressuring them to work for free lest they be blacklisted within the industry, a real death knell to an animator’s career.

According to The Hollywood Reporter, the letter first surfaced way back in December, with its final incarnation landing at THR yesterday. In it, the animators describe the “unfair pressure tactics” and various grievances, egregious as they are. The list of tactics utilized include: “[intimidated] staff into working past official studio hours, disciplinary measures utilizing fear tactics that demotivate and cause distress (such as threatening to terminate employment), implying that other departments are working overtime ‘voluntarily’ as a reason to deny compensation.”

If these prove true, it seems that Nitrogen Studios had created something of a hostile workplace. Indeed, as the letter itself reads, “These issues are breaking people’s ability to focus on animation and are making for an unrewarding and frustrating work environment.”

The movie itself is doing quite well, apparently, having raked in $33.6 million in its opening weekend. As well, it sits at a comfortable 83% on Rotten Tomatoes—a rating that is, in large part, the result of the hard work of a whole slew of animators. Yet you might never know it, as the spurned animators’ letter went on to say that more than a few animators weren’t properly credited for their work on the film, as their names were left out of the roll at the end of the movie.

Sony denied these allegations, saying they were false and without merit. Greg Tiernan, the movie’s director and Nitrogen’s chief creative officer, said “Our production adhered to all overtime regulations and our contractual obligations to our artists. Any time that any concern was brought up, it was handled appropriately.”

It is disappointing though perhaps unsurprising that such tactics could conceivably be used within an industry like this. Regardless of whether or not these allegations prove true, the fact of the matter is that they still lie within the realm of reasonable belief, which is to say that they aren’t outlandish or unbelievable by any means. If true, one hopes that credit—and proper payment—can be delivered where they are due.