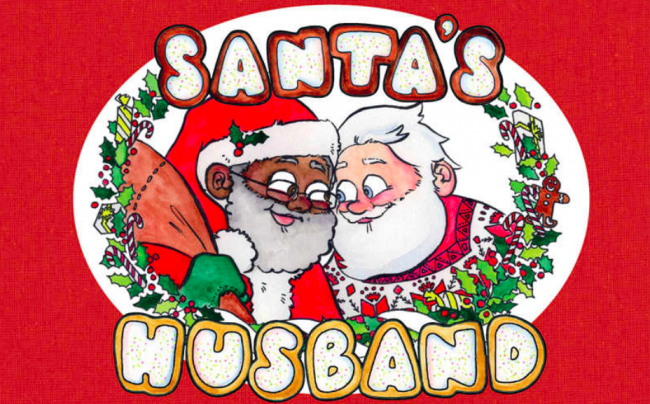 Around this time last year, Daniel Kibblesmith, a writer on The Late Show With Stephen Colbert, published a tweet with a very funny and also very sweet idea of how he and his wife (fellow writer Jennifer Wright) would introduce their future children to the idea of Santa Claus.

Me & @JenAshleyWright have decided our future child will only know about Black Santa. If they see a white one we'll say "That's his husband"

The tweet was inspired by the racist backlash directed at the Mall of America over their decision to hire a Black Santa Claus that year. And because Twitter has changed just about everything regarding the way most media and entertainment-related industries operated, Kibblesmith announced a few months later that that 140-character pitch was going to be a full-fledged book.

I can't believe it, but this is officially happening. 'SANTA'S HUSBAND' Coming Holidays 2017 w/@alperryman from @harperdesignbks. pic.twitter.com/WpHe84Kso9

Santa’s Husband is available now and I cannot recommend it enough. It’s a short, adorable and super touching kid’s (but really everyone’s) book with art by Ashley Quatch. It tells the story of Santa (who is Black) and his husband (who is White). Santa’s husband, you see, is really supportive of Santa’s career and frequently helps out with his mall appearances, etc, and is often mistaken for Santa himself.

As you might imagine, Kibblesmith has faced quite a lot of harassment online. A whole bunch of grown-ass adults sure do feel confident that they know the true race and sexual orientation of a fictionalized figure, and the anger they feel at anyone who proposes an alternative is, well, it’s a lot.

But as Kibblesmith writes in the book, “People have imagined Santa Claus hundreds of different ways over the years! Who is anyone to say what the real Santa looks like? Maybe Santa Clauses can come in all shapes and colors and sizes! Just the families that Santa Clause visits all over the world.”

THANK YOU everyone who sent us a #SantaSelfie with their copy of #SantasHusband 🎅🏿💕🎅🏻 — Keep them coming!