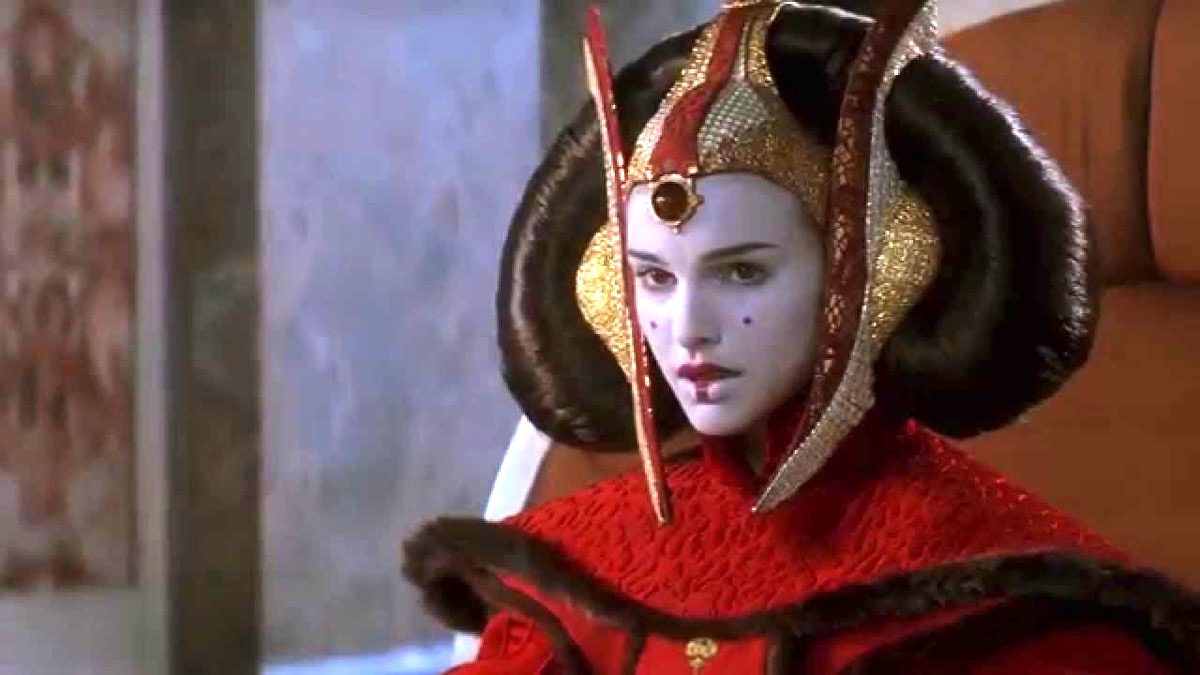 E.K. Johnston’s latest Star Wars novel, Queen’s Shadow, follows Padmé Amidala and her handmaidens as she shifts from her role as Queen of Naboo to senator of the Galactic Republic. We see Padmé step into her new phase as senator quite well, with her ever-loyal handmaiden and friend Sabé right at her side. Sabé is heavily featured in the novel, standing out wonderfully in her own right among a fantastic cast of characters. From serving as Padmé’s body double at a senator-held party to being a close friend that Padmé turns to throughout the story, Sabé has a multitude of standout moments in the novel that make her a favorite among readers and longtime Star Wars fans, myself included.

In the beginning of the novel, we find Padmé being asked to serve as senator by the new queen of Naboo. She ultimately makes the decision to take the job, putting her original plan to go to Tattooine on hold until Sabé makes the suggestion that she could be in two places at once. Sabé volunteers herself to go to Tattooine in Padmé’s stead, allowing her to freely go to the Senate knowing that more proactive moves are being made towards helping slaves on the desert planet.

This was really a big indicator in this particular book of just how far Sabé was willing to go for Padmé early on. We know from The Phantom Menace that Sabé is willing to risk her life, and this only solidifies what kinds of lengths Sabé is willing to go to. Padmé does say that there’s a “difference between asking you to come with me and sending you alone” in regards to Sabé taking on the task, but Sabé is more than willing to go.

Sabé, in this moment, is clearly showing that she is ready to continue on Padmé’s path, wherever it may take them. While the other handmaidens go their separate ways, though staying friends throughout the story, Sabé is still there. Her decision to go to Tattooine really displays just how deep of a connection the two women have. Sabé could have gone on to do something else, but she wholeheartedly believes in Padmé and what she wants to do.

A little over a quarter into the book, Sabé once more acts as Padmé’s body double while attending a party that she was invited to by Senator Mon Mothma. This serves as a standout moment for Sabé in the fact that we get a close look at her once more standing in for Padmé. This was a maneuver that was seen in The Phantom Menace and carried on throughout the rest of Padmé’s term as Queen, but to see it in action for Senator Amidala was so much fun!

Sabé, who has spent so much time under the guise of being Amidala, quite easily slips back into the role. It was interesting to see because for the majority of the book, we only see Sabé as herself or as the alias she adopts on Tattooine. Adopting the “Amidala” tone that she and Padmé had perfected together, Sabé easily mingles with the other senators, and it’s clear how masterful she is at playing the role.

Throughout the novel, Padmé, Sabé, and others comment on the relationship that the two have, but Sabé perhaps describes it best when she is speaking to Tonra after finally getting back in contact with him after a bit of time. She tells him that she loves Padmé and that they have a complicated relationship. “She can order me to my death, and I will go. And she knows it. […] As far as I can see, she will always pick Naboo, and I will always pick her.”

Sabé further mentions that she’s the right hand of Padmé and she will always follow her, even if Padmé’s path goes elsewhere. Such intense loyalty and love for Padmé is a huge driving force for Sabé, and it’s so clearly spelled out in this conversation that she has. She is quite literally the queen’s shadow, following Padmé from queen to senator in any way that she’s needed.

One of my favorite moments is a conversation that Sabé has with Padmé during a visit to Alderaan. It’s a private moment during breakfast only a little before they leave the planet to return home to Naboo, but it really gives a closer look at Sabé in a less formal setting than, say, when she’s standing in as Padmé or when she’s undercover. The two have a slightly formal but easy way of communicating with each other, able to tease back and forth and have a conversation regarding Sabé’s role once they return to the Senate. Sabé’s ease with Padmé is so evident in this encounter, allowing her to relax, if just for a moment. Though Sabé and Padmé are often very intertwined in the book through their interactions, they are individuals, and this calm morning is one of the brightest spots in the book.

And with that, we come to the final moment in the book, which takes place during the epilogue. Padmé’s funeral has happened and we find Sabé in her apartment. She had been reading through Padmé’s senatorial papers that were a culmination of years of work when Tonra interrupts her with a comm call. The final lines of the book show how Sabé will move forward in the wake of Padmé’s death, speaking with Amidala’s voice in an effort to give nothing away.

She says, “Senator Organa, now is not a good time. What do you want?” We might not know for sure what happens after this just yet, but knowing Sabé, she’ll be involved in the Rebellion in some manner. Bail Organa purposefully reached out to her, and Sabé has a burning desire to know exactly what happened to Padmé. The person she was quite possibly the closest to is now dead, and she’s going to figure out what she does next, for the most part, on her own. This final moment in the book really struck me once I had finished reading. Sabé was so closely intertwined in Padmé’s life and the work she undertook that she’s going to continue on with it in any manner she’s able to now that Padmé is gone.

Sabé’s own story within the larger scope of Padmé’s is something special. She supports the queen-turned-senator in so many ways while also allowing us as readers to see her own growth and journey as wider arcs are taking place around her. She’s a character that I really grew to love even more as I read through the novel, and she stands on her own as an important character within the Star Wars universe.