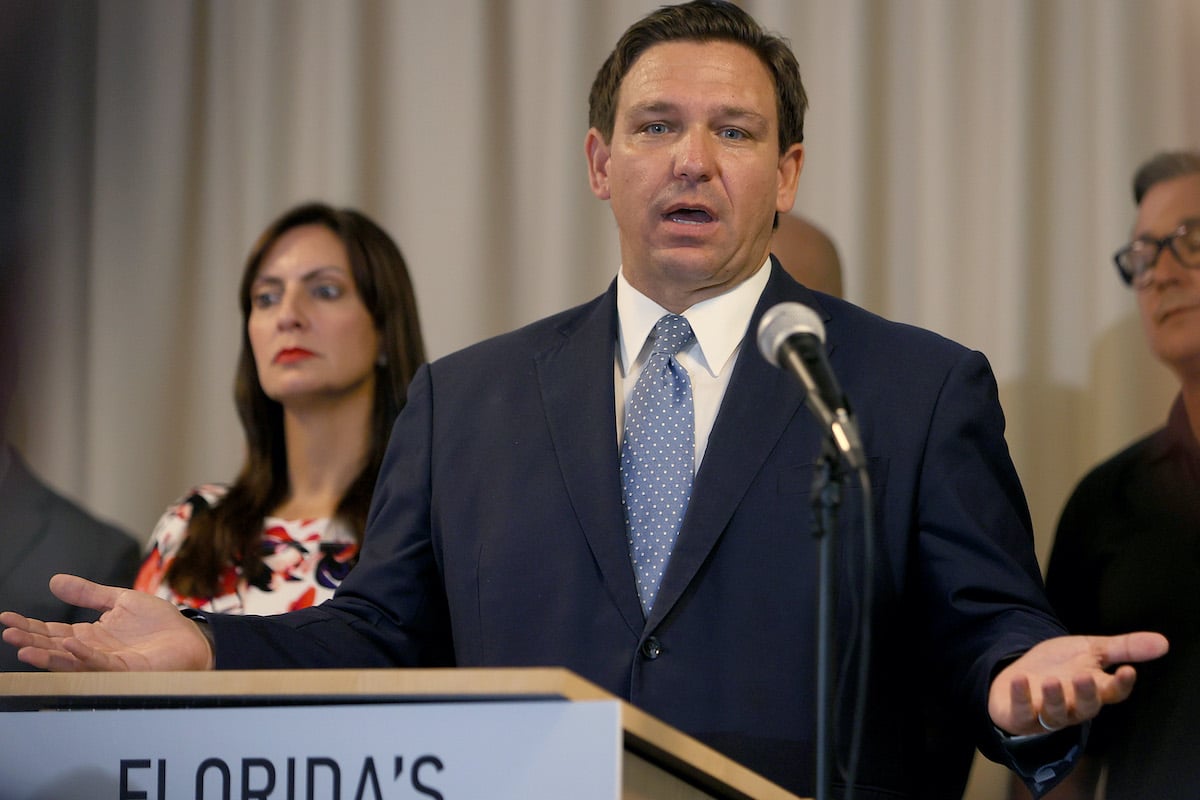 For months, Florida governor Ron DeSantis has tried to present himself as being both pro-vaccine and anti-vaccine mandate. He himself is vaccinated, and he’s encouraged his constituents to do the same. But he’s also gone to extreme lengths to prevent schools and businesses from issuing mandates for students, staff, employees, and customers. And in recent weeks, he’s fully proved that this is not a fence you can straddle both sides of.

Firefighters and police officers in Seattle made headlines last week after a small number chose to leave their jobs rather than comply with the vaccine mandate that had gone into effect. The now-former officers tried to present themselves as martyrs and betrayed heroes, hosting a community breakfast for unhoused people.

Just to be clear: they are not serving their community by doing this. They are unvaccinated, maskless and exposing a population largely unable to access healthcare because of their REFUSAL to serve their community https://t.co/4gtb3tmF2H

Fun fact: if you, a non-cop, try to do this, a cop will arrive to ticket you and steal the food https://t.co/WN7wF3lgbf

They also laid out their boots at City Hall, creating a scene that looked like some sort of memorial, as if they had died and not just voluntarily quit their jobs over their own refusal to comply with a public health mandate.

No one cares! Get vaccinated, dipshits. https://t.co/GifcwBYTxE

Ron DeSantis went on Fox News this weekend to try to court these unemployed, unvaccinated first responders and others like them, going so far as to say he’s trying to work out a plan to offer them each a $5,000 bonus just to move to the state.

“NYPD, Minneapolis, Seattle, if you’re not being treated well, we will treat you better here,” he said. “You can fill important needs for us, and we will compensate you as a result.”

DeSantis justified this stunt by claiming, “On a scientific basis, most of those first responders have had COVID and have recovered.” He offered zero data to back up the claim, or to support the idea that a person cannot contract and/or spread the virus more than once.

DeSantis has been trying to present himself as being pro-vaccine and anti-mandate, but he’s now actively working to encourage unvaccinated, even staunchly anti-vaccination people to come to the state, which is currently seeing an average of over 2,000 new cases of COVID-19 per day.

The governor also recently appointed a new state surgeon general, Joseph Ladapo, who has regularly downplayed the importance of vaccines while also questioning their safety. He’s aligned with America’s Frontline Doctors–the radical group that has spent the pandemic promoting drugs like hydroxychloroquine and ivermectin while also encouraging people not to take the vaccine or even wear masks.

This past weekend, Ladapo was kicked out of the office of a state senator who asked the surgeon general to wear a mask during their scheduled meeting. Ladapo and two of his aides refused to wear masks, even though that senator told them she is about to begin radiation for breast cancer this week, and is therefore at a higher risk of contracting COVID-19, as well as a higher risk for experiencing much more severe symptoms.

Again, this man is now one of the state’s top medical officials, appointed by DeSantis. That senator, Tina Polsky, told the AP, “It was so shocking to me that he treated me in this manner. If he is a surgeon general for the next several years, I am really concerned about a future public health emergency and not being able to rely on him for necessary guidance and proper scientific leadership.”

As The Week’s Joel Mathis writes, “Theoretically, it should be possible (though not optimal) to be both pro-vaccine and anti-mandate. Yet in real life — and certainly in Florida — it doesn’t seem to work out that way, especially for politicians trying to pander. For months now, whatever his rhetoric, DeSantis has been functionally anti-vax. These two choices only make it more explicit.”

And the Washington Post’s Philip Bump sums it up:

By embracing a category of police officers defined by having rejected the requirements of their jobs, he’s saying that vaccination isn’t particularly important. By appointing a surgeon general who amplifies unfounded concerns about the safety of vaccines, he’s reinforcing that those shots are something to fear. And by encouraging these sentiments, he’s also increasing the likelihood that Republicans in his state and elsewhere won’t get vaccinated — a decision that cost an estimated 90,000 lives nationally from June through September.

DeSantis has been trying to have it both ways: He’s trying to appeal to the most ultra-Trumpy, rabidly anti-vax Republicans while also trying to maintain a more rational, reasonable front. He already wasn’t very convincing (due to, you know, all the deaths and overcrowded ICUs) but he’s finally reached a point where he had to pick a lane. And he chose the lane full of anti-vax cops and medical professionals refusing to respect the safety concerns of cancer patients.