Glitter all of the Nazis. 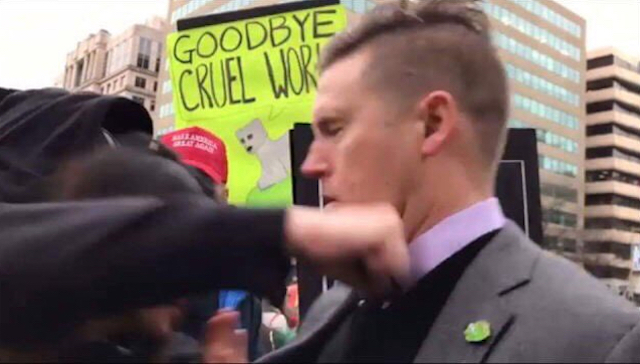 Richard Spencer, famous for being a walking Nazi Pepe meme and getting punched in the face, should by now be receiving the message that he’s a target for anti-fascist heroes wherever he goes. If you think punching Nazis isn’t the answer, I submit the newest approach to Richard Spencer: coating him thoroughly in glitter.

Spencer—who coined the phrase “alt-right” because “white nationalist dickheads who admire and model themselves on Nazis and refuse to denounce Hilter” didn’t have the same ring to it—was in D.C. with a gang of his miscreants. He was leading an anti-bombing Syria protest, but allow me to explain that head-scratcher. These Spencerian cockroaches may be hardcore Trump supporters, but they’re also sometimes isolationists because they’re vehemently against anything that could be construed as doing Israel’s bidding (because it all comes back to Israel, Jews, and hatred of the other for them). So while “anti-war” Nazis is a bit puzzling, remember that hatred always comes first.

According to the Independent, the Spencer cheer squad were chanting bon mots like “We want walls, not war!” and sporting signs that said “No more wars for Israel.” They consider Trump’s actions in Syria “a betrayal.” How quickly the rabid dog turns to bite the orange hand of his master.

Counter-protesters were there to meet them, chanting in response, “Fuck white supremacy,” to which Spencer’s discount Nazis yelled back the clever, totally relevant insult (if you sleep with a picture of Joseph McCarthy), “Commies go home.” Then, when they started on chants of “Make America great again,” (because maybe they’re not mad at Trump after all? It’s hard to follow the ideology of sea slugs), the antifas shot back, “Make America punch Richard again,” which is really quite catchy.

This time Richard didn’t get punched, however. As the two sides clashed, Spencer was approached by an admirable anti-fascist, who threw glitter in his face. Here you can watch it on repeat, set to the soaring strains of Springsteen:

richard spencer getting glitterbombed and then later running away into the night pic.twitter.com/rzBFgnY4U6

So satisfying. I could watch glitter explode over Richard Spencer’s head for days. I hope he’s still scrubbing it out of his fashy haircut.

As The Independent points out:

Glitter bombing is an act of protest in which activists chuck glitter on their targets. Glitter bombers are often spurred by, though not limited to, their target’s opposition to same-sex marriage. Spencer is against same-sex marriage which he has described as “unnatural” and a “non-issue,” arguing that “very few gay men will find the idea of monogamy to their liking”.

Just in case you were sitting there asking yourself, does Richard Spencer really deserve all of these attacks on his person? Yes. Yes, he does. And according to Heatstreet, Spencer was at the time being protected by bodyguards, because he can’t take the heat from the white supremacist souffle he’s cooking.

Even so, a true champion of the people managed to break through the lines to deliver a sparkly, defiant message. Let this be a lesson that if you dislike any kind of violence or cannot get close enough to Richard Spencer to properly punch him in the face, glitter is cheap, convenient, pretty, and a total bitch to get off your skin and clothes. If you find yourself heading to an event where Richard Spencer will be, remember to stop off at the local arts and crafts store first.

(via The Independent, Heatstreet, image: screengrab)