Review: The UnPocket 1984-Inspired Stealth Clothing That Lets You Drop off the Grid

For the ungoodthinkful out there. 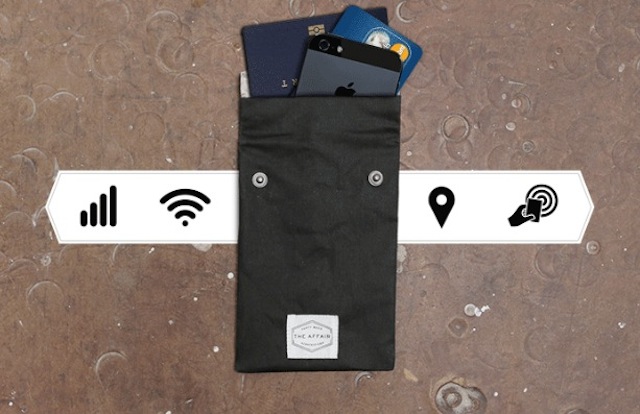 The Kickstarter for the UnPocket and The Affair’s line of 1984-inspired clothing recently wrapped up at £47,427— nearly double its £25,000 goal. Once again, denizens of the Internet have made it clear that they value their privacy by supporting the “big brother”-blocking clothing technology the line offers—it’s supposed to block cell, WiFi, GPS, and RFID signals. But how well does it actually work?

Perfectly, as far as I could tell. For those of you who are unaware, the UnPocket is the little pouch in the image above that, when closed, blocks signals to and from the devices inside. It works in conjunction with the “1984” clothing line, as each piece of Orwell-inspired attire—a blazer, a jacket, pants, and a button-front shirt—has pockets that line up with the snaps on the UnPocket to hold it in.

I generally leave my phone on silent for most of the day, because my fiancée and I text a lot, and the constant vibration—or, worse, that bird whistle noise if you’re into your phone actually making sounds—would probably get pretty annoying to my coworkers. Unfortunately, that often leads to me forgetting to take it off silent, which means I nearly never get messages or phone calls on time.

So, I tested the UnPocket by slipping my phone inside instead of turning it on silent while I was in the Mary Sue office, and it didn’t make a peep all day. (I get my messages forwarded to my computer, which allowed me to leave the phone in there all day.) Eventually, I took it out to check to see if anything had gotten through, and it had completely lost service. It took a few seconds for it to find the cell connection and WiFi again, and then my notifications poured in, which I’m sure was a delightful symphony of phone sounds to anyone nearby.

My phone definitely lost its signal while buttoned inside the UnPocket, and it even seemed to maintain the signal block when I snaked a power cord in through the flap to charge. As far as the signal blocking capabilities of the UnPocket go, it works exactly as advertised, so I’m sure that any privacy-minded backers will be perfectly happy with the finished product.

For me, it was incredibly convenient, as I keep my phone in a wallet-style case, which I absolutely recommend to anyone who has a smartphone and a wallet—so everyone. I could just slip my entire wallet (yes, there was room for that) into the case and know that all of the things I carry with me were protected.

That may not be the case for everyone, though. I still use an iPhone 4s, which fits deep inside the UnPocket with room to spare, but those with bigger phones may not be so lucky. When closed, the UnPocket measures 6.25 inches tall, while the iPhone 6+ is 6.22 inches and the Samsung Galaxy Note is 6.04. Both of the mini tablets masquerading as phones will fit in width, but at those height measurements, it may be hard to button the top flap, which is essential to getting the signal blocking functionality to work. As far as fitting anything else in there with them, that’s hard to say.

It’s still pretty large, though. To get the full picture, here it is just barely fitting my 3DS XL inside. The XL is about as tall as, but significantly thicker and wider than, the larger smartphones:

It just fits, but it can’t close and secure my valuable Smash Bros. data.

If you have a normal to mid-sized phone, it should fit just fine in addition to anything else you might want to slip in there.

It might seem silly to use the UnPocket when I could just switch my phone to silent or do not disturb, but it was much easier for me to remember to take it out of the pouch at the end of the day than to remember to flick the little switch on the phone. But not everyone shares my phone/memory quirks, and some might not be willing to go the extra mile and make use of the UnPocket with their every day clothes. It’s most practical when paired with the accompanying clothing line.

The “stealth fashion” pieces each have specialized pockets that are meant to house the UnPocket pouch and play nice with its button closures. If you like the 1984 line, your UnPocket will fit right in—for the most part. 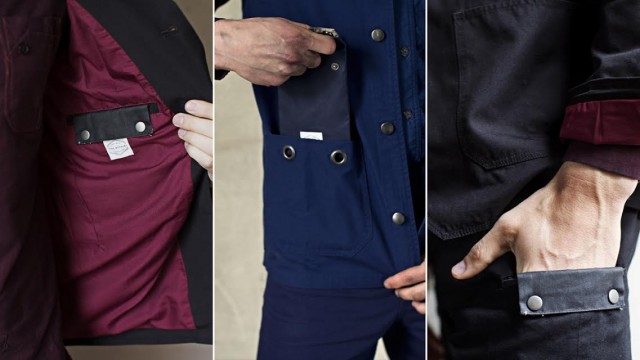 In my experience, it’s not as easy as it could be to line up the buttons where they’re supposed to on the garment when closing the flap, but it’s way better than with regular clothes.

Trying to use it with regular clothes is definitely a bit cumbersome, so keep that in mind if you’re on the fence about whether you need this additional level of privacy for your digital devices. Or you could just go the extra mile and cut little button holes in all of your regular pockets. Your call.

It’s also worth noting that while The Affair is a menswear brand and doesn’t make women’s cuts, they do suggest that women give the 1984 line a shot anyway and offer sizing conversion suggestions in the Kickstarter’s FAQ section. Preorders are available until the end of October, 2014 on the 1984 collection’s website.