REVIEW: The Tomorrow War Is an Entertaining Mish-Mash of Sci-Fi Tropes 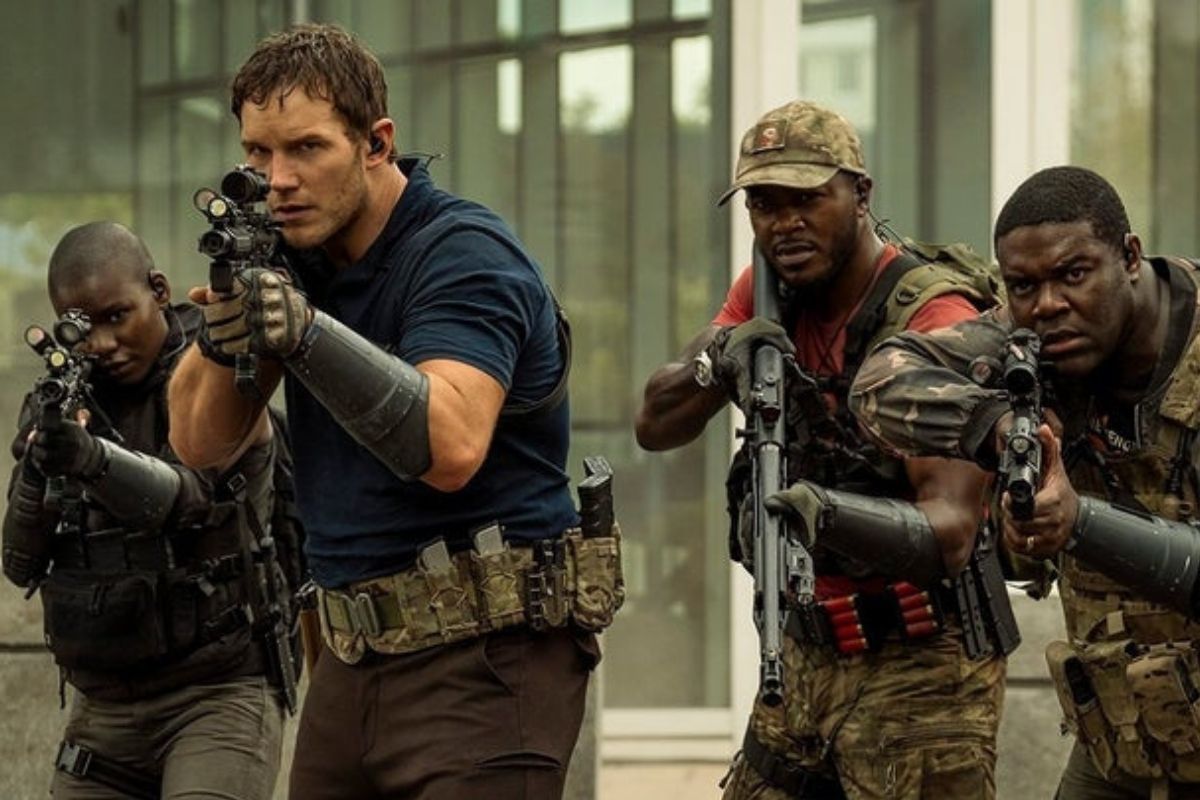 ***SPOILER ALERT: This review contains spoilers and plot points from the film.***

The Tomorrow War may take place in 2051, but its tone and aesthetic will remind you of the 1990s. The Chris Pratt vehicle liberally borrows from every science fiction film of the past twenty years, but its truest inspiration comes from the melodramatic, overstuffed blockbusters of Roland Emmerich and Michael Bay. There’s an earnestness to the film that often tips over into outright corniness that the movie fully indulges.

But I’m getting ahead of myself. The Tomorrow War stars Chris Pratt as Dan Forester, a high school biology teacher and veteran who is trying to secure funding for his research. Dan is married to Emmy (Betty Gilpin, in a thankless role) with whom he shares a science-loving daughter, Muri (Ryan Kiera Armstrong). Their world is changed when a group of time-traveling soldiers appear on the pitch in the middle of the World Cup. They’ve come from 2051, where humanity is on the brink of extinction thanks to an alien invasion.

The governments of the world sign on for a global draft, as thousands of people from the present are recruited to fight the invaders in the future. Dan gets drafted, and quickly finds himself surrounded by everyday civilians with zero battle training. These include Nora (Mary Lynn Rajskub) and Charlie (an always welcome Sam Richardson), an anxious scientist out of his depth. All recruits are equipped with a surgically implanted wrist gauntlet that acts as their time travel device, and are given 7 day tours. Only 30 percent come back, and once Dan arrives in 2051 it’s easy to see why.

The aliens, called White Spikes, are large albino muscular beasts equipped with long tentacle-like tails that can shoot poisonous spikes. They have swarmed every continent on the planet, gobbling up most of the world’s population. If you are wondering why armies of the future would recruit average citizens to be cannon fodder instead of say, stopping the invasion to begin with, well … don’t think about it too much.

The Tomorrow War is most directly influenced by the vastly superior Edge of Tomorrow, but borrows liberally from A Quiet Place, Interstellar, Aliens, and countless other sci-fi actioners. Directed by Chris McKay (The Lego Batman Movie), the film is more concerned with hopping from set piece to set piece as Pratt and company search for a biological weapon/MacGuffin to defeat the aliens once and for all.

And here’s the thing: these set pieces are a blast. From a tense recruitment sequence to the first charge into the future, McKay keeps the action moving at an entertaining clip. Bullets fly, monsters chomp, and the comic relief quips their way through familiar but still very engaging territory. Yvonne Stahovski shows up as a no-nonsense Colonel and military scientist known as Romeo Command, who is quickly (and predictably) revealed to be Pratt’s grown daughter.

Pratt does his thing as a quippy action hero, but he fails to meet the film’s more emotional beats. It doesn’t help that Strahovski’s Muri is angry with Dan over his behavior between 2022 and 2051, a time that neither Dan nor the audience is privy to. Dan also struggles with daddy issues of his own thanks to his estranged father James Forester (J.K. Simmons), an anti-government survivalist and Vietnam veteran.

If that sounds like a lot of plot, it is, and the films 139-minute runtime drags towards the end. While Strahovski and Simmons effortlessly ground the increasingly absurd plot with authentic performances, Pratt mostly just furrows his brow and looks confused. His performance lacks the emotional gravitas that a star like Tom Cruise or Matthew McConaughey easily channels.

Still, there is a lot of fun to be had in The Tomorrow War: the action is exciting, the supporting cast is great fun, and the movie packs a surprising pro-science and environmentalist message. The film, which was bumped from theaters to Amazon Prime due to the pandemic, makes for a very engaging at-home watch. It’s big dumb popcorn flick fun, and there’s nothing wrong with that. Just don’t think too hard about the plot.