Review: 'The Breadwinner' Is the Female-Led Story We Need | The Mary Sue

Review: The Breadwinner Is Exactly the Kind of Female-Led and Created Story We Need Right Now 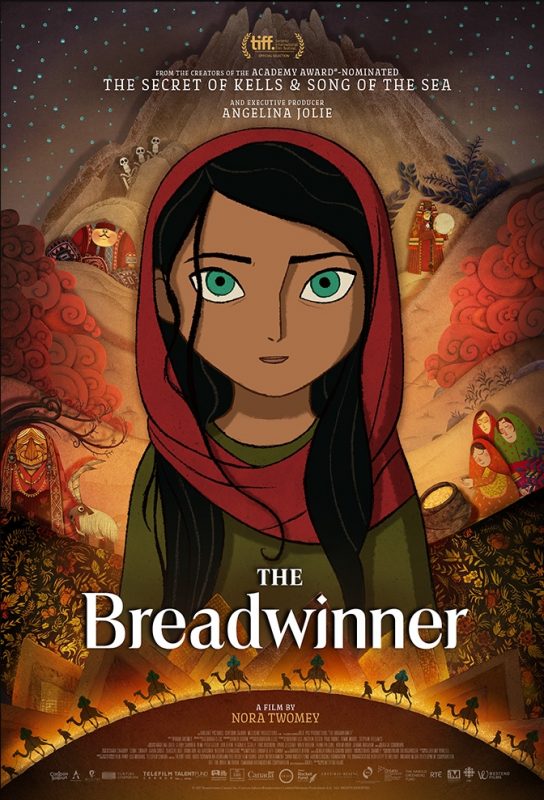 In the flurry of news about all the world’s terribleness, let’s not forget that there are still examples of beauty and love to be enjoyed. One such example is a gorgeous animated film called The Breadwinner, directed by Nora Twomey and executive produced by Angelina Jolie, based on the children’s novel by Deborah Ellis.

The Breadwinner tells the story of an 11 year old girl named Parvana, who lives in Kabul, Afghanistan under the rule of the Taliban. When her father Nurullah is unjustly arrested, Parvana and her mother Fattema go to the prison to petition for his release, and Fattema is beaten. Fattema falls into a deep depression, leaving Parvana, her older sister Soraya, and her baby brother to fend for the family themselves.

Under the Taliban, women are forbidden from traveling without men, and so with no one to earn money or escort them out of the house, the food quickly gets used up and the family is at risk of starvation. Parvana decides to cut her hair and dress up as a boy to go out and provide for her family, doing so by selling goods at market and providing reading and writing services the way her father did.

Since Nurullah is a storyteller, and Parvana seems to have inherited that gift, the film goes back and forth between the real world, and the world of a story Parvana is telling to entertain her baby brother each night; the story of a young man’s quest to go to the top of a mountain and retrieve his village’s harvest from a monster that’s stolen it.

Much of the beauty in the film is in the way the animation changes between the painterly style of Parvana’s real life, and the colorful, more textured look of the world of the story she’s telling. Twomey deftly balances the harshness of Parvana’s life with brilliant moments of humor to take the pressure off of Parvana’s harrowing circumstances. The story also serves to punctuate one of the many themes in the story: that one child can fight monsters and win.

What’s lovely about the story, too, is how feminine it is, and the characters that we’re rooting for, whose perspectives we’re following are all women and girls, each of whom are nuanced, complicated characters.

Parvana, voiced beautifully by Saara Chaudry, is an amazing and imperfect heroine you will instantly fall in love with in this film (if you haven’t already read the books). Fattema (Laara Sadiq) starts the film literally immobilized by her circumstances, but in the story’s climax finds a fierceness in standing up not just for herself, or her daughters, but in a way, for all Afghan women. Parvana’s sister Soraya (Shaista Latif) walks the fine line between making-do with what she has, and finding ways in which to rebel, mostly in helping Parvana when she needs it. 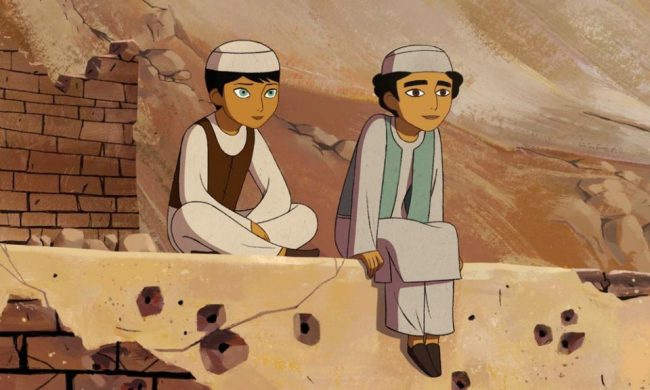 And then there’s Parvana’s awesome bestie, Shauzia (voiced with melancholy earnestness by Soma Bhatia). She, like Parvana, is dressing like a boy to provide for her family, and so the girls team up to take on odd jobs together. However, unlike Parvana, Shauzia does not come from a happy home. It’s insinuated that her father is abusive, and she dreams of saving up enough money to be able to live somewhere near the ocean, which she has never seen.

The way the girls share this dream, but ultimately have to diverge in their priorities is a heartbreaking but accurate portrayal of female friendship that is treated with respect and love.

Initially, I was concerned by the fact that this film was an adaptation of a white Canadian woman’s book…by a white Irish woman. However, while the source material wasn’t created by Afghan women, both Ellis when writing her books and Twomey when making her film did everything they could to incorporate the participation and perspectives of Afghan women.

When writing The Breadwinner (and subsequent books in the series), Ellis traveled to Pakistan to interview refugees at an Afghan refugee camp. It was there that she met a mother and daughter whose story she fictionalized through Parvana.

For the film, Twomey made sure to cast all-Asian/Arab folks for the voice cast, and the composers worked with Afghan musicians to make sure the film had Afghan input from every angle. The fact that Afghanistan’s first lady has spoken highly of the film makes me think that it manages to be as authentic as it can possibly be without having been written/created by an Afghan woman.

The Breadwinner is a thoroughly engaging, beautifully-told story that will appeal to children and adults alike, and will be a wonderful conversation starter between parents and children about the way other children live around the world, and what can be done to help those in trouble. I would highly recommend seeing it this week if you not only want to see a great film, but also want to send the message that this is the type of filmmaking you’d like to support and see.

The Breadwinner is in theaters NOW.