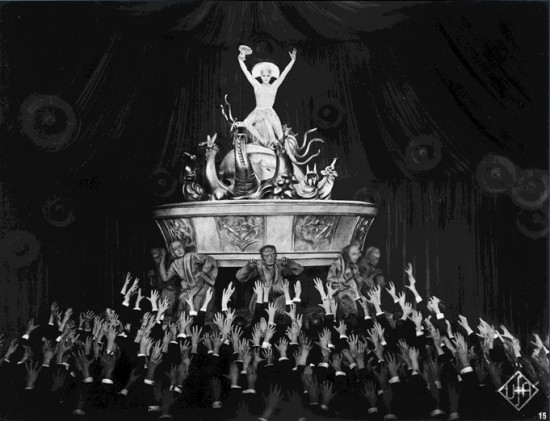 Last night, Fritz Lang‘s Metropolis played on the Brandenburg Gate to a crowd of over 2,000.  The movie has been restored nearly to its original length after eighty-three years.

Though the two and a half hour expressionistic, dystopian film was received poorly by German audiences in 1927, it has since become a classic of German cinema and inspired aspects of geek culture from Blade Runner to the 5th Element, to, yes, Superman.

With the original lost, the most commonly available version of the film was one that was heavily cut by American distributors.  An uncut version eluded historians until 2008, when one was found in an Argentinian museum.

The Argentinian cut was heavily damaged and of a smaller gauge than other versions of the film, but restoration went under way with the only other surviving piece of the original film’s production: the orchestral score.

“The most important sources were the Argentinean version and the score,” Anke Wilkening, the chief film restorer, told Spiegel Online. She explained how the sheet music contained notes on particular events, such as “explosion” or when a new character appeared. “And the music itself was full of gesture, so that the movement on the screen is also in the music itself.”

In Berlin the outdoor screening was accompanied by live orchestra (via broadcast, as the musicians were happily inside, performing for an indoor screening across town).

Spiegel Online’s gallery of the event can be found here.