No one under 40 dressed this room and it shows. 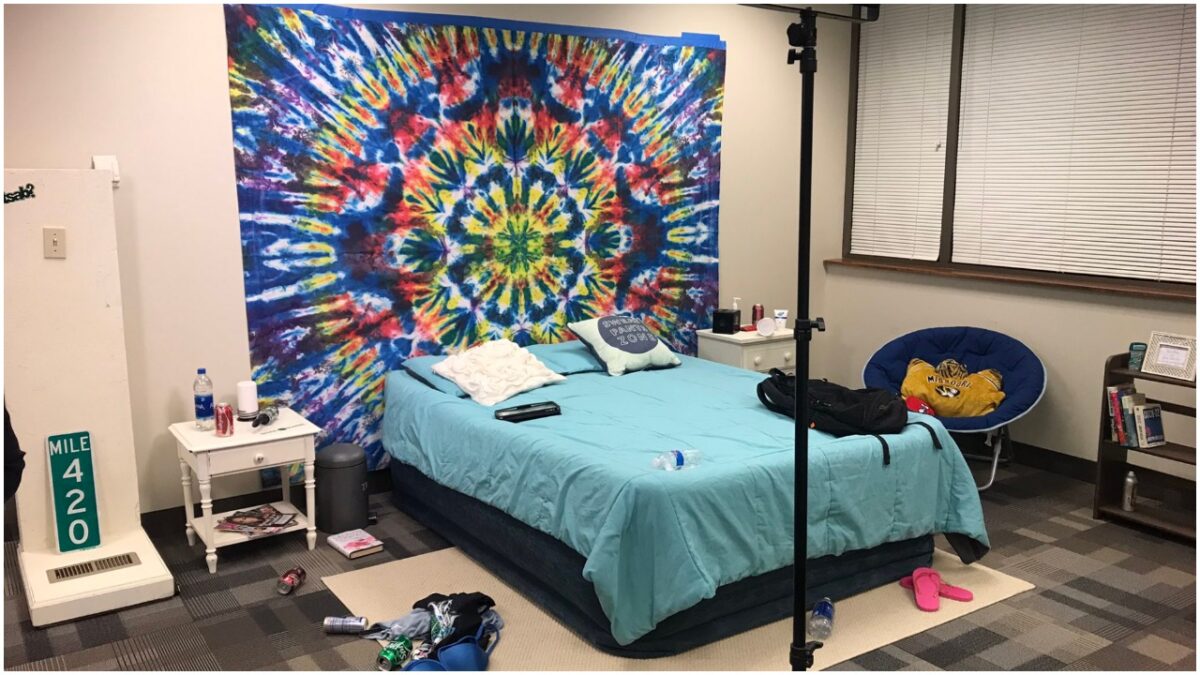 Journalists have long peddled scare stories about the dangers surrounding America’s youth. From the very first PSA that gravely intoned, “It’s 10PM, do you know where your children are?” the news cycle has been dominated with fearmongering regarding children, and especially teenagers. The media has whipped up a panic about everything from Satanism to color-coded sex bracelets, manufacturing outrage based in half-truths and hearsay.

The latest attempt to cause parental panic comes courtesy of Paige Hulsey, a journalist at St. Louis’s CBS affiliate KMOV. Hulsey tweeted, “Looks like a normal teen’s bedroom, right? Think again. Coming up on @KMOV, we’ll show you what parents should be looking for so they can identify signs of drug use. I was shocked at what I found in this room!!! #stl #n4tm” along with a photo of a “teenager’s bedroom”:

Looks like a normal teen’s bedroom, right? Think again. Coming up on @KMOV, we’ll show you what parents should be looking for so they can identify signs of drug use. I was shocked at what I found in this room!!! #stl #n4tm pic.twitter.com/Df2yegDPUq

The tweet quickly went viral for Hulsey’s absurd mock-up of a teenage bedroom. Looking at the image, this is quite clearly a hastily thrown together set piece in the corner of a commercial office. It also leans heavily on every stoner cliché there is, from a massive tie-dye wall hanging to a sign that reads “Mile 420.” Whoever this “teen” is, they sure aren’t hiding their love of weed from this ace reporter. There’s a lot to unpack here: unopened soda cans, a bra on the floor, a Lauren Conrad book, the barest of bookshelves, the industrial carpet. Print magazines?! I doubt a teenager even set foot in this room.

Folks were quick to roast Hulsey for the tweet and the obviously faked bedroom:

Who dressed this set, Michael from The Office? https://t.co/NMUkZ2yZ5p

Looks like a normal teen’s bedroom, right? Think again. Coming up we’ll show you what parents should be looking for so they can identify signs of drug use. I was shocked at what I found in this room!!! pic.twitter.com/YX2l4Wq4Yk

This might look like an ordinary teen bedroom but we will show you how to look for signs of marijuana, or, as the kids call it, “Jazz cabbage” or “Alice B. Toklas” pic.twitter.com/dGHeLb9UUu

You’re shocked by what you found in a corner of the studio made up to look like a stoner kid’s room?

this is a fake room set up to look like a teenagers room and it has the most Hello Fellow Kids energy i’ve ever seen https://t.co/vEHUpz6xnI

If your teen is living in a commercial office space, complete with drop-down ceiling & high-traffic carpeting, you have bigger concerns than whether or not he/she is using so much cannabis that they have turned their bedroom into a dispensary, complete with “Mile 420” sign. https://t.co/BDp6tmLFQ2

This framing is so troubling:
-The War on Drugs has ruined lives. DEA tactics should be approached with skepticism
-False equivalence between vaping/weed use (“Mile 420”) & more dangerous drugs
-Perpetuates unrealistic stereotypes about drug use
-No public health experts quoted https://t.co/kpqjO6xheV

Hulsey tried to combat the naysayers by tweeting that the room WAS set up at the DEA headquarters, with help from non-profit group Addiction is Real. So what you’re saying is … no teenager lives like this? And this is a staged room from the people who led the war on drugs? Very normal, very cool.

*looks like* …
Verbatim from live shot: “We are inside DEA headquarters in downtown St. Louis this morning and we are in this bedroom that was *SET UP* by the group Addiction is Real” … seems pretty transparent to me.

I’d love to see the kitchen, but I heard Rachel Leigh Cook smashed it up while trying to fry an egg.

It absolutely does not look like an normal teen’s bedroom. It looks like what it is: some out-of-touch white baby boomer’s ad hoc guess at what a “druggie’s” bedroom looks like. Every single person involved in this, including yourself, gets paid WAY too much money for this crap.

After decades of fearmongering and parent-scaring, at least social media allows us to call out these disingenuous setups when we see them. And at least Hulsey is game enough to make a joke … we guess?

I thought #MAGA, gun laws, abortion, #covid vaccines, and climate change were some of the most controversial things to tweet about. Boy was I wrong! Stay away from talking about tampons as hiding places for counterfeit pills laced with fentanyl.