Reigniting the Brad and Jen Obsession: Can We Not? | The Mary Sue

Reigniting the Brad and Jen Obsession: Can We Not? 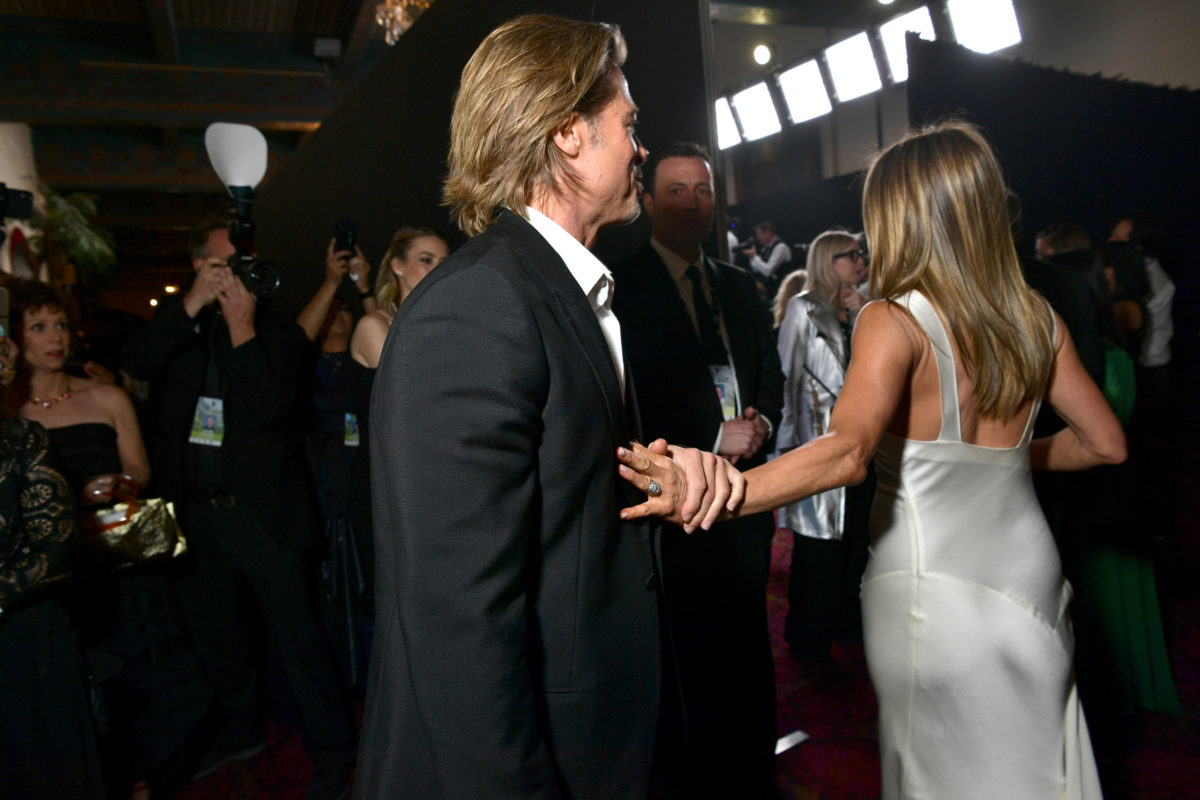 I know it’s pointless to ask this but when it comes to getting obsessed with the relationship between Brad Pitt and Jennifer Aniston again what if we … don’t.

We’re going to have to deal with a lot of Pitt in the press in the next month, thanks to his Oscar nomination and near-guaranteed win for his underwhelming but charming portrayal of an aging, but still hot, and boring but still sexist stunt man in Once Upon A Time in Hollywood. It’s bad enough we have to sit back and watch as a mediocre performance is a pretty terrible movie gets heaps of awards because we really like the actor—but do we have to drag Jennifer Aniston into it too?

They both won trophies at the SAG Awards on Sunday night and instead of focusing on their work, we’d rather focus on the fact that two friendly exes interacted for a moment. I know no one watches The Morning Show and Once Upon A Time In Holywood is beyond overrated but … really?  Do we need to analyze their body language in every moment they’re in public?

The obsession with these two goes beyond mere tabloid fascination, it says something deeper about us as a culture.

“Brad and Jen” were married two decades ago. They divorced fifteen years ago and yet the obsession with them and their respective lives together and apart hasn’t stopped. Why? They’re two successful, genetically gifted, talented people, who are very good in mass-market entertainment and … that’s it? Are they just so generic that they exemplify the presumed white, cis, straight, thin default human and thus we project everything onto them?

For Brad Pitt, this is probably true. He’s one of those guys that can do no wrong. Divorce after divorce, allegation after allegation, he always springs back. And that’s … predictable but fine. He’s a great producer when it comes to supporting diverse voices, and his career is undeniable. But getting into the personal stuff is always going to result in discomfort with seeing a Hollywood golden god as a real and very flawed person.

When it comes to Jennifer Aniston though, it’s different. Her genericness is her strength. She’s pretty but accessible. Talented but not transformative. She’s still the girl next door that so many people project onto and also the victim of so much sexism and misogyny (internalized and otherwise). We obsess over her in so many ways that pit (Pitt?) her against other women and against our societal expectations and standards. We shame her for not having kids and exalt her for not being weird like Angelina Jolie. We love to build Jen up and watch her suffer. It’s horrible and exhausting.

I have nothing against either of these people as artists. Their work is obviously great and resonates with many people. I even think it’s nice that they are still friendly years after a divorce. That’s good and healthy. I have no issue with them. I have an issue with us as a culture and our obsession with them. They are two people who deserve to live their lives as they want and be left alone and do their jobs.

So please, let’s do that.