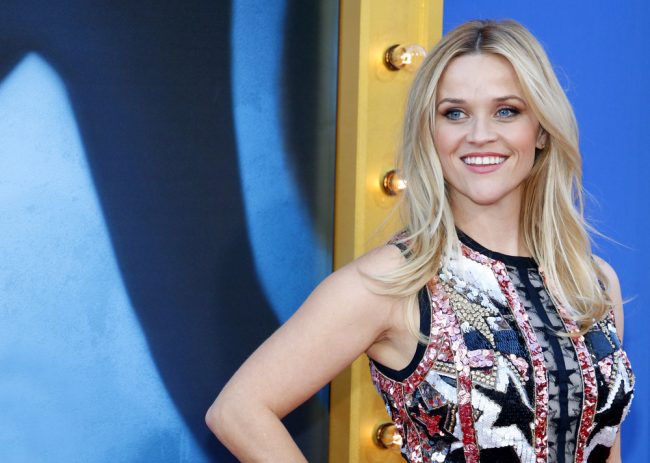 In an essay for Glamour, Reese Witherspoon is challenging the way women are taught to think about ambition. Two years ago, the magazine celebrated her at their “Women of the Year” awards, and she addressed the same issue then, stating “ambition is not a dirty word.”

She writes here about the time she spent working on that speech. “At the time,” she writes, “I was reading a lot of articles about how people find ambition in women to be a negative trait. There was a Columbia University study that concluded that a woman with ambitious traits seemed selfish and less worthy of being hired than a man with the same traits, which made me wonder, What the heck is wrong with being ambitious? … I asked the audience a question that night in Carnegie Hall: What if all women were encouraged to be a bit more ambitious?”

The essay explores the changes Witherspoon has seen firsthand in Hollywood during the course of her 20+ year career. On the one hand, we’re seeing the rise of so many stellar, financially successful women-driven projects like Wonder Woman and Big Little Lies. More and more ambitious women are claiming space in front of the camera and behind it, and each one chips away at that deeply ingrained idea that ambition isn’t a feminine quality.

She writes, “I remember, 15 years ago, being a young actress and starting to audition for movies in L.A. There were always a lot of young women waiting in the green room for their shot at the one part there was for a girl in any given movie. Because that’s all there was—one part. As I got some of those parts, I would arrive on set to realize I was the only girl with a speaking part. There were also no women in the crew: Maybe a girl or two in the wardrobe department, but no one in any other department. I was literally surrounded by 150 men. I remember thinking it was odd that women made up half the population but such small percentages of roles in Hollywood, on and off the screen.”

But while things may be getting better, they still have a long way to go. She writes, “the film and TV business still needs to make meaningful change. Some people are realizing that projects with female leads are big-time moneymaking commodities, but I’ve also had studio heads say to me, “We don’t want to make biopics about women,” or more simply, “We’re not interested in female-driven material.” (My first go-round as a producer with Gone Girl? Every studio passed but one. When the book hit number one on the best-seller lists, it was a different story.) Women made up just 29 percent of protagonists in last year’s highest-grossing films—that’s a new high, but come on…it’s not even a third.”

She recognizes, too, that that statistic does not represent all women, and that whatever she sees herself having accomplished due to her own ambition, it’s infinitely harder for women of color.

“Another thing I think about a lot is how it feels to be a minority woman in America, so rarely seeing yourself onscreen, and it’s unconscionable. When I asked Mindy Kaling, ‘Don’t you ever get exhausted by always having to create your own roles?’ she said, ‘Reese, I’ve never had anything that I didn’t create for myself.’ I thought, Wow, I feel like a jerk for asking that; I used to have parts that just showed up for me. I can’t imagine how hard it is to write your own parts and simultaneously have to change people’s perceptions of what a woman of color is in today’s society.”

The whole essay is an interesting read, detailing her path to heading up a production company centered around women-led projects at a time when the entertainment industry’s relationship with and perception of women is being forced to change.

She also offers some fantastic advice in the inevitable instance you meet someone who still doesn’t see ambition as a desirable quality:

“When I saw the recent Harvard study that found that single female M.B.A. students downplayed their career ambitions in front of male classmates for fear of possibly hurting their marriage prospects, I thought, UGH. Run away from a man who can’t handle your ambition. Run.”