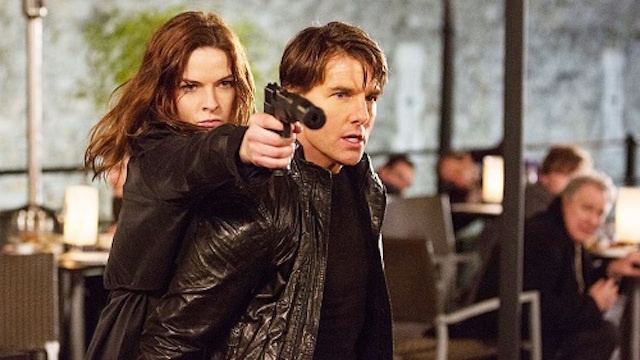 Rebecca Ferguson, as MI6-trained Ilsa Faust, was a big highlight of Mission: Impossible – Rogue Nation, and the franchise is going the smart route of making her its first leading lady to make a substantial reappearance.

Rogue Nation director Christopher McQuarrie is also returning for the series’ next outing, and it looks like he wants to make sure all the essential elements from his previous success are in place. Along with bringing Ferguson back in the first place, part of that success, as McQuarrie once explained to Empire, was the idea that Ilsa should “never be the ‘woman in peril.'”

Hey, who knows—with Ferguson making a comeback appearance alongside the series’ male regulars, perhaps she’ll become a fixture of the movies. I mean, someone’s gotta take over when Tom Cruise eventually flies away in an alien spaceship or whatever it is that Scientologists believe in, right? (My understanding of Scientology is admittedly limited, but to be fair, so is Scientologists’ as far as I can tell.)

We won’t hold out too much hope when Mission: Impossible has taken this long to introduce a recurring female character at all, but it does leave us optimistic about the future.