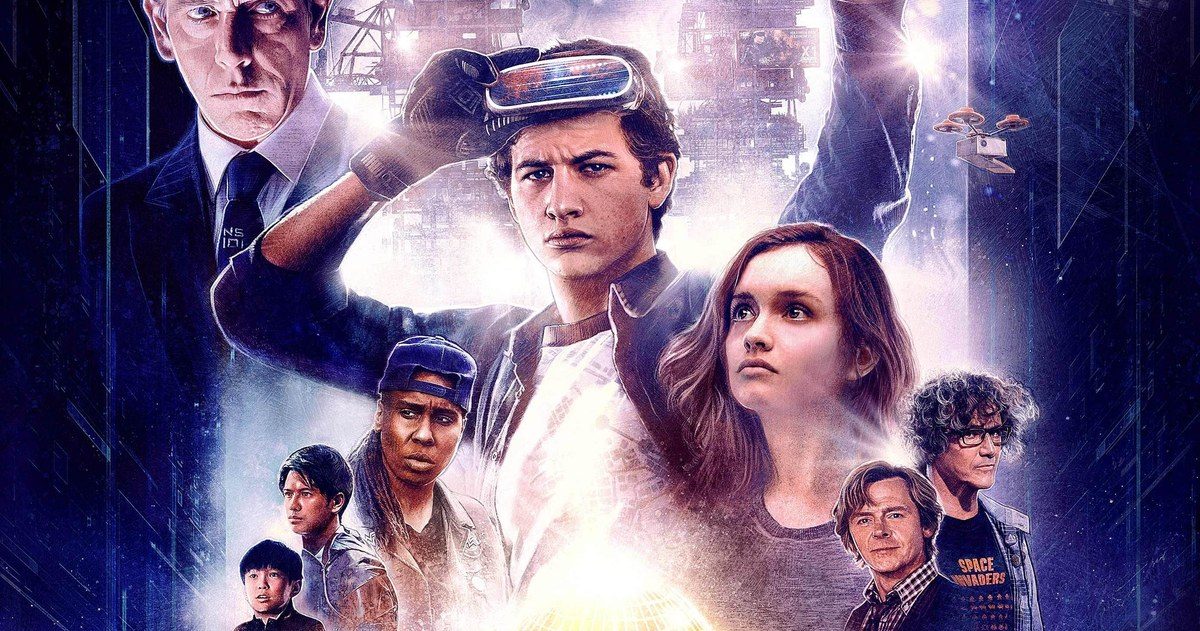 From the tokenization-fest that is its source material to the laughable marketing, there’s been a good amount of skepticism leading up to the release of Ready Player One. But after a “surprise” screening at SXSW in Austin, Texas this weekend, our expectations have been raised, at least a tad.

Spielberg himself was in attendance to introduce the film, along with much of the cast and author Ernest Cline. Spielberg reportedly told the audience “This is not a film that we made. This is, I promise you, a movie.”

The cast of #ReadyPlayerOne with Spielberg on the far right. #SXSW pic.twitter.com/bt5SIYw4Cr

From the early reactions, much of the audience was very into Ready Player One as a “movie,” as an over-the-top blockbuster focused on fun and nostalgia.

TOTALLY engrossed in every second of @readyplayerone. It is one of the most technically brilliant things I have EVER seen. Spielberg is one of the few directors who could orchestrate this kind of visual symphony that SO many people will enjoy. Pretty amazing.🎮

#ReadyPlayerOne is nerdy as all hell but it’s hard to not leave the theater with a huge smile on your face. Pure Spielbergian joy. pic.twitter.com/7ToMQ7uIdL

#ReadyPlayerOne is classic Spielberg fun! What a blast, can’t wait to see it again. Rewards repeat viewings. Tons of great references, visuals and heart. So kick ass it blew the speakers!

I didn’t think I would like #ReadyPlayerOne, but I liked it a WHOLE LOT. I think people cheered and laughed every 2 mins and dang this film was entertaining. So many references, I can’t wait for everyone to see it so we can all talk about it! #sxsw

READY PLAYER ONE is full of giant, dorky heart. I both want to hug it and give it a noogie #sxsw

I’m also really happy with the number of reactions that mention improvements over the book.

Went into READY PLAYER ONE skeptical as hell. Came out largely as a joyous convert. I have a handful of issues with the structure and characters, but it improves on the book in important ways, the action is riveting, and I really bought the humor. #readyplayerone

READY PLAYER ONE: Good lord I was wrong about this one. It’s oodles of fun and kind of the antithesis of Cline’s novel in terms of its quality. References weren’t too cloying for me, but I was so close I couldn’t pick out too much. #sxsw

The decision to have this movie’s premiere at SXSW was a brilliant one. I can say from personal experience that the crowd at that festival is so happy to be there, so sleep-deprived, and is so full of barbeque and booze that the excitement at events like these is palpable.

I don’t know if I have ever seen a #SXSW crowd cheer on a movie the way they just cheered on #ReadyPlayerOne. We haven’t seen this Spielberg in a long time – it’s just pure entertainment and it’s hard not to watch it without a dorky smile on your face the whole time

If this doesn’t answer whether people loved #ReadyPlayerOne, I don’t know what will. pic.twitter.com/2uXGYCAck7

However, not everyone was so enamored with the movie.

literally my face during every second of Ready Player One. pic.twitter.com/dqZTNeN81r

#ReadyPlayerOne hot take review: a fun, enjoyable film with some amazing set pieces and references (THAT scene). However, the film suffers from a script that has a LOT of convenient plot devices and never really manages to make you care about the characters… 7/10 #sxsw

#ReadyPlayerOne posits a corporate big wig who exploits fan culture for profit as its villain. The irony of that is giving me a headache. This is no love letter to pop culture. It’s a crass play to nostalgia; it offers nothing new or exciting.

I don’t think it’s spoiling RP1 to tell you that at a tense moment between two characters one of them ominously utters the line “A fanboy knows a hater.”

So, you know how you feel about this movie

So, all in all, I guess we’re right back where we were, in “wait and see” mode.