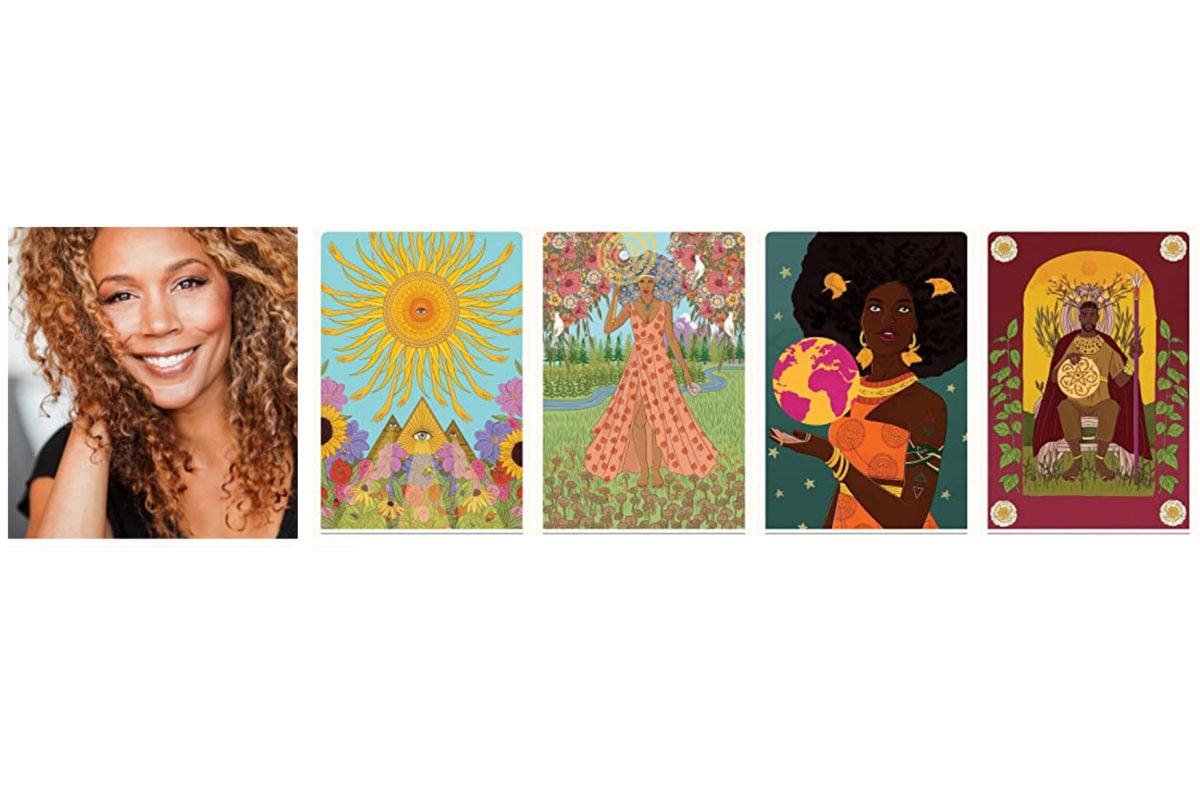 Last year, I was lucky to get the chance to meet and chat with Rachel True about The Craft, me being a self-proclaimed “weird Black girl” and her immense love of tarot. So, it was a delightful surprise to learn that True would be coming out with her own tarot deck and guide, True Heart Intuitive Tarot, to be released in late October—coinciding perfectly with the release of The Craft’s sequel, The Craft: Legacy, back in October.

What’s refreshingly unique about True’s True Heart Intuitive Tarot is that it serves as one part tarot deck & guide, and one part memoir, with beautifully written personal essays that correspond with each of the cards showcased in her book. These pieces transform the tarot deck into an intimate reflection of True’s coming-of-age that is felt not only in the cards themselves, but in the relationship the reader has with the overall deck.

More recently, I got another lucky chance to chat with Rachel about her book, tarot, and what it means to find self-discovery in the “esoteric.” Check out the interview down below!

Larissa Irankunda (TMS): What made you decide to write your memoir as a tarot deck & guide? I think it’s so clever and creative.

Rachel True: Well first of all , I didn’t think the world was clamoring or particularly needed a memoir from me at this point. But I love writing, so part of the challenge [in creating True Heart Intuitive Tarot] was whether or not I could even write this book. I read voraciously, and have since I was a small child. But I had actually initially set out to write a script about tarot readers and the business of tarot, as it’s something I didn’t really know about. Because there’s a lot of  “card-slingers” out there — that’s my word for them — so I figured I’d write a script about that whole thing.

But then, I got hit up by some lit agents and I was like wait: I love literature, I love writing, and I love words. And everything pretty much flowed from there. And the thing I learned while writing this book—because I’d like to think the tone is conversational—is that I wanted it to be like you’re hanging out with your friend.

Because ultimately, I think I’ve gone through some stuff that a lot of people have gone through, a lot of ups and downs. And I think many people forget that actors are people going through stuff as well. Because I still to this day get a lot of fan mail and DM’s from people [asking for advice], which is why I thought this memoir would work. Like: here, I’ll answer your nosy questions! But maybe there’s also something in there that will give you strength when you’re laid out on the floor. Tools for when you’re like “how do I pick myself back up?” so I hope that ultimately came across in this book.

TMS: It seems like tarot and other “witchy” practices are so trendy now. Do you think it’s become more acceptable and accessible to explore these types of things now?

True: I’d love to call exploring alternative ways to heal ourselves not just “witchy”.  I was into tarot and all of these things before I got cast in The Craft, and just because I was in a witch movie doesn’t make me a witch. So I guess because I’m part of a different generation I like to call it esoteric studies. And one thing with this book that I’m trying to do is help demystify some of these things. Because I meant what I said [on the back of the book] about this memoir/tarot deck being a “Shrink in a Box” and a “Spiritual Xanax”.

And I say that because there’s a lot of thing we grow up and lack in skill-wise as far as emotional development and introspection goes. So, that in mind, here are some cards—normal, completely mundane cards—that can help you bridge that gap. Nothing is inherently magic in the cards themselves—but what is magic are the images on them, and what it spurs in us viscerally. Because what you see in a card is gonna be completely different from what I see. And what you see in the exact same card may be different day to day: you might see it as scary one day and then exciting the next.

So my intention in all this is less ” ooh all that mystic stuff” and more “how can I use this to self-soothe, and learn new patterns that are healthier and which help me get closer to the goals I want.” It’s a way to shrink yourself, and it works brilliantly in tandem with therapy.

And I also want to point out to my Black and Brown brothers and sisters that, you know, we didn’t go to therapy for a long time. We went to church for counseling. But we also had, in almost all our communities, someone who we could go to for introspection: “Oh, there’s Miss So-and-So, go over to her and she’ll tell you about yourself.” or “That lady, her grandma throws some stones. If you wanna get some answers, go to her.”  We have a long tradition of this type of thing going all the way back to Africa! So what I think is that, hopefully I’m part of a movement reconnecting us back to some of our roots as well.

And I just want to add to this that when I talk about unlocking your intuition, that is the whole point of my book. So that people can read their own cards, and not pay money for other people to do it. Or try to hit me up—I don’t want to read your cards!

I want people to learn to read themselves, because that’s them bettering themselves. Reclaiming this active role of their own life.I love when I do a [tarot] layout and go “okay the outcome doesn’t look great, but I can look somewhere in the middle and see it’s because I am doing these things over here. So if I switch this behavior, the outcome switches, you know? Nothing’s set in stone.

TMS: This brings to mind Carl Jung’s quote that “Until you make the unconscious conscious, it will direct your life and you will call it fate.”.

True: Yes, I think it’s really true! Because basically at it’s core, I’d like to think I’ve written a self-help book. About people looking in. And most of us, when we’re talking to someone else—a stranger, or even our friends—we’re wearing a mask of “it’s all good” or “it’s all not good” or whatever. Now tarot’s advice is to take off the mask when we’re alone, and examine some of those shadow areas [within us]. And I talk about those shadow areas within myself. It wasn’t really fun writing that Devil [card] essay in the book.

But I just know that I’m not the only one who’s been a fool in love and reacted poorly to the situation. And I put that specific essay in there because I’ve learned, and I haven’t done the same thing since! And I bring this up with the Devil card because I believe it’s so easy for people to see the Devil card and go “ooh what a scary card!” But it’s not scary; it’s about uncovering the shadow and what that’s saying about things you still need to uncover and heal about yourself.

TMS: In the book, you correspond each of your significant life experiences with a Tarot card. Do you feel that the energy of the cards you chose still define those moments? Or have the energies of the cards shifted as you learn more about yourself, and the guidance you receive through connecting with tarot?

True: Even though I’ve written a book about tarot and I have decades—decades—of experience with it, I will always be a student of it, because my idea of the card is always shifting and changing. In my book, I include pretty classic interpretations of the standard Rider-Waite tarot interpretations. But one thing that I know now is that a card that scared the heck out of me when I was younger, doesn’t scare me at all now. But it may at a certain point; the relationship with it could very well morph. Because basically, if you’ve read any Joseph Campbell’s break-downs of The Hero’s Journeyy—that’s literally what the Major Arcana (which are the first 22 cards of the tarot deck) is. That is literally the Hero’s Journey laid out for you.

TMS: What advice do you have for people who are apprehensive about starting a tarot practice?

True: When it comes to tarot, I know that people are scared and I’m like—listen, these cards are all just tools.

In the book I talk about Higher and Lower vibrations, which is essentially about the energy corresponding with the lesson being interpreted in a card. And when you’re first doing a tarot spread, think of the cards as a car, and the spread itself as a map to kind of help you understand the overall message. Because each position in a spread has a name and a reference, which helps you fill in the tarot card’s information/message.

What I see on Youtube and other places are a lot of people who don’t seem to know the classic interpretation of the cards. Which is fine, because it’s a very intuitive practice. But that in mind, what I’d encourage is using your intuition in conjunction with the classic interpretation, and see what melds together, and what more wisdom will come the more you do it and the more you read. Which is how you ultimately become more versed in the cards. There is not just one correct way to do tarot.

And when it comes to tarot, I stand by in reminding people that “I’m this many years old and I’m still studying it. I’ve written a book on it—but I’m still studying it.” So I would encourage people who are newly into tarot to actually study it. To actually see what it’s about, because it’s not just cards and “I’m predicting your future!”. That’s just the surface level of it. I invite people to go deeper because I think [tarot] actually kind of helps me feel grounded and sane. And listen, I’m always gonna appreciate anything that makes me stay sane.