Prostate Surgical Robot Can Peel the Skin off a Grape 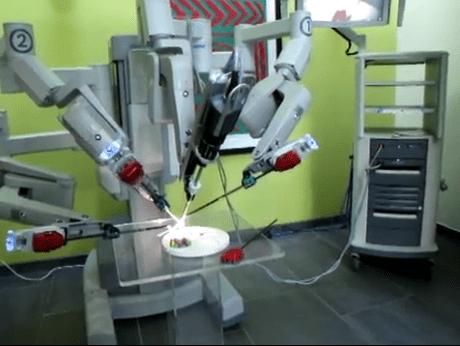 Da Vinci, the four-armed robot seen above, has two main jobs. First, it performs surgery at Southmead Hospital. 450 robotic radical prostatectomies and 30 bladder removals so far. Second, it strikes fear in the heart of prostates everywhere. Despite its intimidating appearence, da Vinci is a remarkably dexterous robot, and in hopes of spreading awareness of mens’ cancers, the urologists of Southmead Hospital have released footage of Ramesh Thurairaja using the contraption to gingerly peel a grape.

At the controls, Thurairaja can control all the robot’s arms, including one with an endoscopic camera that has two lenses for providing a total stereoscopic view. David Gillatt, lead clinician for urology at Southmead, described the footage this way:

We hope that by bringing a robot similar to our own out of the operating theatre and into a public setting we can raise awareness of the advances that have been made in treating prostate cancer.

A nice thought, but now I can’t stop being aware that someday, something like that might want to do things to my insidey-parts. Video after the jump.