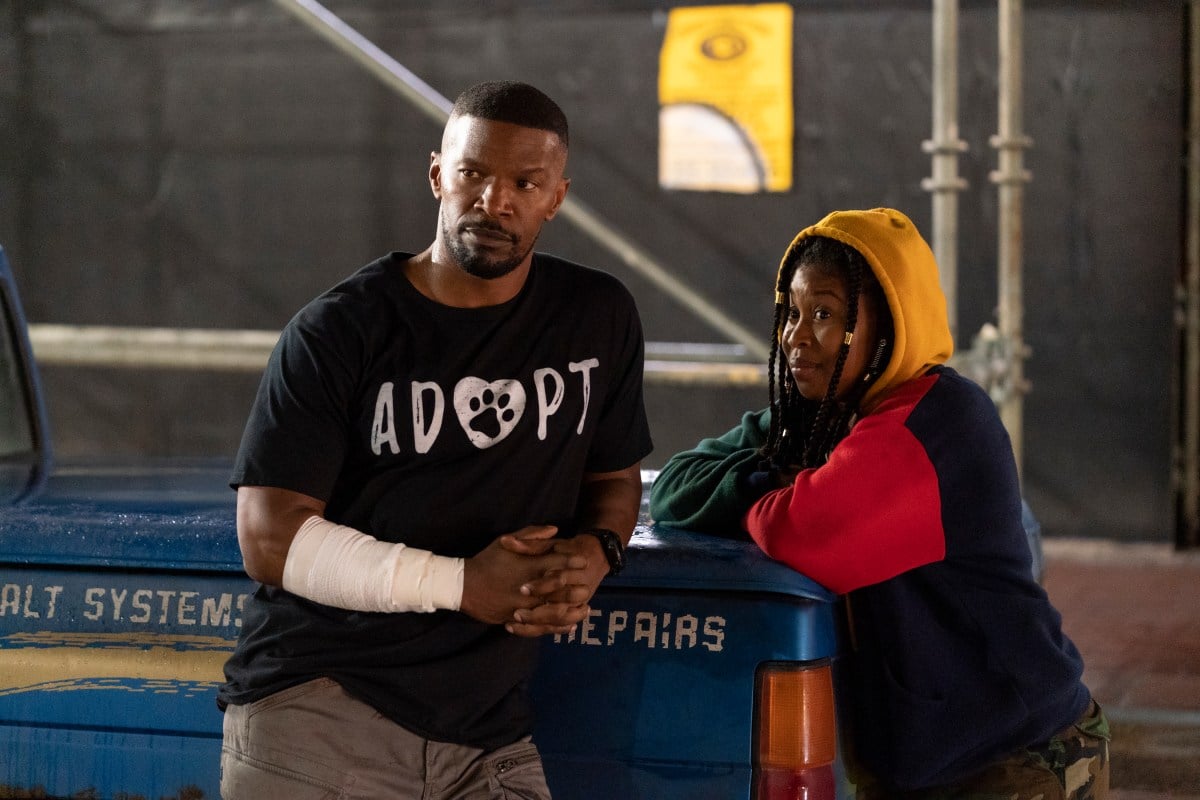 In a world positively glutted with superhero content, how do you carve out a unique take on a well-worn genre? It’s a question that Project Power tries its darnedest to answer, with mixed results. The film takes place on the gritty streets of New Orleans, where a sleazy drug dealer (Rodrigo Santoro) releases a new designer drug called power. The pill, which glows like a missing Lite Brite peg, gives the user five minutes of super powers. Those powers depend on the person who takes them, but buyer beware: the pills can also make you explode into a pile of goo.

From here we meet Robin (The Deuce‘s Dominique Fishback), a high school student who dreams of rapping, while dealing power after school to pay for her mother’s medical treatment. She’s protected by rebel cop Frank (Joseph Gordon-Levitt), who is also a customer, using power to compete with drug-enhanced criminals on the streets. Their paths soon intersect with Art (Jamie Foxx) an ex-soldier tracking down the source of the super drug for deeply personal reasons.

Project Power is at its best when it focuses on its characters. Foxx brings humor and heartache to his role, and Fishback, in a star-making turn, holds her own against both Foxx and JGL. While most superhero films are saddled with larger, existential questions of power, responsibility, and good vs. evil, Project Power offers a closer look at the struggles of its characters.

Directors Henry Joost and Ariel Schulman (Catfish, Nerve) deliver moments of genuine intimacy between Robin and Art, as their paternal friendship develops. It’s the kind of relationship we rarely see in the genre, especially between two characters of color. While Art is an intimidating presence to his foes, he is kind and supportive with his young charge. “You’re young. You’re Black. You’re a woman,” he tells Robin. “The system is designed to swallow you whole.”

Writer Mattson Tomlin, who worked on the script for The Batman, makes these personal moments land easily. And Robin’s freestyle raps, written by rapper and co-star Chika, are excellent, showcasing her prodigious wordplay and humor.

Project Power touches on issues of race and poverty, as well as New Orleans politics post-Katrina. There’s a message here about the power of big pharma, of wealthy corporations using struggling folks as guinea pigs. Gardner (Amy Landecker), who heads the private defense contractor making the drug, even name-checks Henrietta Lacks in her super villain monologue.

Unfortunately, these stronger themes are often buried in bombastic action sequences and genre cliches. Sleazy henchmen? Check. A cop who follows nobody’s rules but his own? Check. Shadowy foreign dictators eager to use the drug to create an army of super-soldiers? Check. It remains unclear what exactly big bad drug company Teleios wants to do with power, and why they’re testing it on NOLA’s have-nots.

The film drops plot lines as it barrels toward an action-heavy finish. And while the action scenes are kinetic and exciting (especially one that takes place during a demonstration of the drug) the film loses its pacing amidst the plot machinations.

Still, despite its shortcomings, the film delivers an entertaining entry into Netflix’s summer of blockbuster movies.