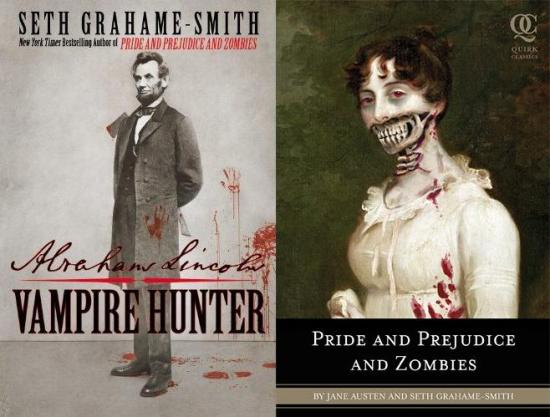 Seth Grahame-Smith, author of both Pride and Prejudice and Zombie and the more recent but equally ridiculous Abraham Lincoln: Vampire Hunter, is about to get one more reason to be beloved by the eccentric geek community: He has been chosen to write the script for the next big Tim Burton-Johnny Depp collaboration, Dark Shadows. The film is to be based off the gothic soap opera series of the same name that ran on ABC in the last 60s and early 70s.

Perhaps as cool as the fact that such an out-there writer earned this opportunity is the way in which he earned it. Grahame-Smith was recognized as having potential for scripting after scripting his own novel about our favorite tall, top-hatted president on his vampire-killing adventures. Now that’s not a cool story because of the causation. After all, most screenwriters are hired based on other work. It’s cool because hidden in that story is the fact that THERE WILL BE A MOVE OF ABRAHAM LINCOLN: VAMPIRE HUNTER. Actually, we already knew that. It’s currently listed in pre-production on IMDB with a 2011 release. But here’s more news on who may be in the director’s seat, from Deadline:

Burton and Timur Bekmambetov bought that project out of their own money as producers, and I hear that Bekmambetov is likely to make the film his next directing effort.  The book chronicles Lincoln as he navigates the North through the Civil War, with the added twist that his mother was killed by a supernatural creature. That traumatic experience forged his will to destroy vampires and their slave-owning helpers.

But enough about the distant future, back to the slightly nearer future. For those who don’t know, Dark Shadows was basically a soapy amalgamation of all things ghoulish. First there were ghosts, then vampires, werewolves, monsters, witches and wizards, and even zombies. Who, then, could be more perfect than Grahame-Smith to helm the script? Filming for Shadows is slated to begin in January.

And if either film is as amazing as the trailer for the Lincoln book release was, we’ll be in for some real cinematic treats. In case you haven’t seen it, here’s the trailer, which we just can’t show you enough times: