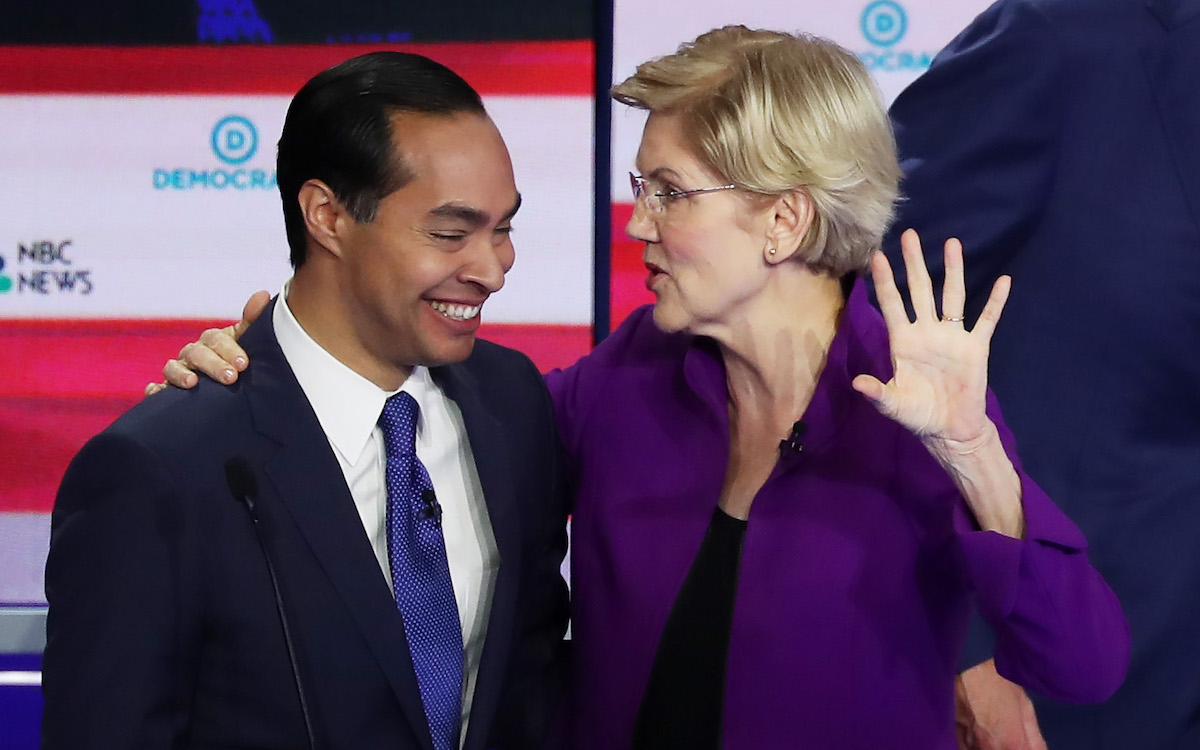 Of the twenty candidates heading into the next round of Democratic primary debates, three have made the move to include their pronouns in their bios on Twitter (and presumably elsewhere.) As of this writing, those candidates are Elizabeth Warren (She/Hers), Julián Castro (He/Him/Él) and Bill de Blasio (He/Him).

As you might expect, there are a bunch of conservative trolls calling this “virtue signaling,” because those people cannot fathom that plenty of people actually care about these things, therefore they assume it must be a put-on. The criticism, unfortunately, isn’t just limited to a few randos on Twitter and rightwing website’s comments sections, although those do abound. We’ve also got this human boat shoe of a brain trust shooting his ill-informed mouth off:

While they’re at it they should add their adjectives: dumb/dumber

All three of these candidates are (presumably) cisgender people whose gender identities appear to be obvious, which is likely why so many trolls don’t understand the point of stating pronouns. (Not everyone who doesn’t understand this issue is a troll, of course, but those resorting to mockery are going to be rightfully categorized as such.) But when cis people include their pronouns in their bios, nametags, or introductions, it hopefully makes it easier for trans/nonbinary/gender-nonconforming people to share theirs.

GLAAD’s “Tips for Allies” page suggests opening up meetings or other events by introducing yourself by name and which pronouns you use. “This sends the message that you are not making assumptions about anyone’s gender, and that people are free to self-identify,” the site reads.

MyPronouns.org is “a practical resource dedicated to the empowering and inclusive use of personal pronouns in the English language.” They write:

Sharing your own pronouns is a great idea, but it isn’t requisite. Keep in mind, however, that there is a privilege of appearing in a way that fits both your gender and the pronouns that many people associate with your gender. In other words, if people’s assumptions are correct, never having to name those assumptions begins to normalize the very process of making assumptions (which for others may be incorrect). Thus, sharing pronouns is a great way to disrupt the normalization and privilege of assumption.

For high-profile politicians to share their pronouns is an indication that their campaigns are inclusive and welcoming, and that they’re dedicated to making space for LGBTQ+ issues.

GLAAD’s director of communications Mathew Lasky told NBC News, “Politicians identifying and expressing their pronouns is a great representation of how to establish inclusive spaces for dialogue with potential voters. As more people identify beyond the binary of male and female, identifying your pronouns in conversation is not only a great way to educate mainstream audiences about gender identity, but also to show conscious support for the LGBTQ community.”

So good on Warren, Castro, and de Blasio for leading the way among their Democratic peers. Hopefully, more will follow suit soon.