If the academics involved with the Foodtubes project realize their vision, the joky popular description of the Internet as a ‘series of tubes’ could become an actual thing, though instead of transporting packets of data, it’d be used to carry foodstuffs and other physical goods.

Per Foodtubes’ proposal, the system would consist of “metal capsules 2m long, which are shifted through underground polyethylene tubes at speeds of up to 60 miles per hour, directed by linear induction motors and routed by intelligent software to their destinations.” In the long run, the group envisions a network that could span continents, such that “we could see an ostrich slaughtered in Cape Town, and delivered to Edinburgh”; nearer-term, the primarily UK-based group wants to give it a spin in London. 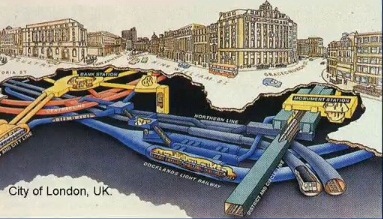 The proposal uses lightweight capsules, which are roughly the same size as the cages that are carried by supermarket lorries, Hodson explained. They are moved by an electromagnetic “kick” from linear induction motors built into the side of the underground tubes and, at junctions, are steered one way or another by other linear motors operating under computer control.

The group moved to linear induction motors, when it realised that vacuum power, normally used in smaller capsule transport systems, would be impractical on this scale.

Granted, a project like this would have been a lot easier to execute if a city was built around it; retrofitting even part of an old city like London will be both laborious and expensive, as there’s lots of stuff underground that needs to be torn up to make way for the tubes and the buildings themselves aren’t optimally positioned. Still, aboveground goods transport has its inefficiencies and costs, and if the Cape Town-to-Edinburgh idea sounds far-fetched, this could be a good idea within more limited urban areas.

(eWeek via Slashdot, title pic with thanks to Dancindan84)