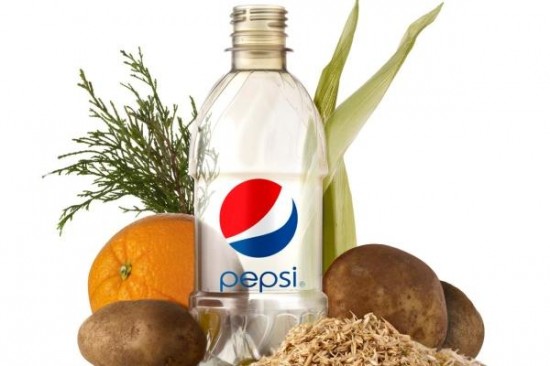 Your move, Coca-Cola: Yesterday, Pepsi showed off a new type of bottle made entirely from plant material. According to the AP, the bottle as currently made incorporates switch grass, pine bark, and corn husks, though Pepsi plans ultimately to incorporate “orange peels, oat hulls, potato scraps and other leftovers from its food business.” While the bottle isn’t yet poised for wide rollout, Pepsi says it will begin limited testing in 2012, and, if successful, will begin to convert all of its bottling to the new material.

The bad news, and the good news, about this new material is that it’s not really new: The material produced by Pepsi’s process may be made from plant scraps, but it’s actually PET plastic, a common packaging material. This may be reassuring for consumers in that they know that their newly-packaged Pepsi won’t taste like corn husks, but the packaging will be functionally identical to what they’re used to. But PET is not biodegradable or compostable, though it is recyclable.

Still, this is an upgrade in that PET is normally made from fossil fuels: Though Coca-Cola makes a bottle using thirty percent plant material, a 100% plant material bottle is unmatched in the industry, and its adoption by a giant like Pepsi could spur competitors to move towards petroleum-free packaging.