In which predictable things happen, but in the best way possible. 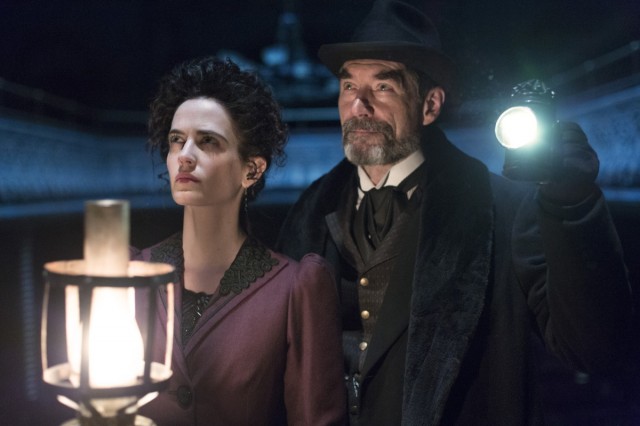 Penny Dreadful came to a close this week with more of a shadowy, haunting whimper than a twenty-first century bang, and I was completely okay with it. Though it left us with as many questions as it did answers, I really didn’t expect anything less; if you did – what show have you been watching for eight weeks?

First of all, I’d like to sincerely apologize for the delay on this finale review; I took a week off after finishing my first book, and absolutely could not get the episode to stream from my accommodations. It’s called The Fangirl’s Guide to the Galaxy, by the way, and it will be out with Quirk Books in Spring 2015 (wow such plug much shameless very name-drop wow).

But on to what we’re all finally here to discuss: the Penny Dreadful finale. “Grand Guignol” solidified what I had already come to suspect about this season: far from being the first collected volume of a penny dreadful, these eight episodes have instead served as the prologue to what will ultimately be an excellent season two/chapter one. If you came to the finale wanting big drama and huge surprises, you were no doubt left disappointed.”Grand Guignol” gave us some reveals that were so drawn out we’d pretty much all guessed them; but honestly, I feel like that’s kind of the point. Penny Dreadful isn’t about big, explosive shockers; it’s about the slow burn, the quiet cliffhanger; the atmosphere, darkness, and drama of subtle twists and beautiful language; Eva Green’s acting; and a great set-up, which is exactly what we’re left with.

“Grand Guignol” did give us pay offs for many of the revelations we’ve been expecting throughout the course of the season. We finally get Ethan’s wolf transformation – and can I just say I’m happy they’re going with the full moon/wolfman approach, as opposed to the “transform into an actual wolf whenever I want” Twilight-esque werewolf (of which I’m sure we were all wary). Poor Brona finally kicks it (with some help from Victor) and makes her way onto his operating table under Caliban’s icky, Igor-like watchfulness. Caliban fully lives up to his “Nice Guy Caliban” moniker this episode by assaulting Maude the second she bestows kindness upon him – now we just need Victor to sew him a skin-fedora. And, like Victor, Malcolm finally accepts his surrogate child when he quite literally chooses Vanessa over Mina, thankfully bringing the Mina storyline to a close.

With all those answers, we still have a thousand questions on the table for next season. Chief amongst those – for me, anyway – is what is this show going to do about Dorian? I was pretty okay with his notable absence from the finale, given I’ve found his character fairly weak, but we’ve got to see the portrait eventually, and the writers have to find a way to make Mr. Gray more integral and interesting to the overall plot. Then there’s Ethan – how does he know so much Latin? Why is he a werewolf? What’s up with his daddy issues? How angry is he going to be when he finds out Victor did stuff to Brona? As for Vanessa, is she really willing to give up her demonic possession in favor of becoming a basic? And, thankfully, it seems as though Dracula is still out there – so who are the wonderful minds behind this show going to get to play him? These are the important questions.

Though we’ve no doubt got a bit of a wait, I look forward to a second season filled with Helen McCrory, Dr. Jekyll, Jonathan Harker, some ghosts, and Dracula.

Let us know what you thought of the Penny Dreadful finale in the comments!

Penny Dreadful will return to Showtime for a ten-episode season two, hopefully as soon as humanly possible.