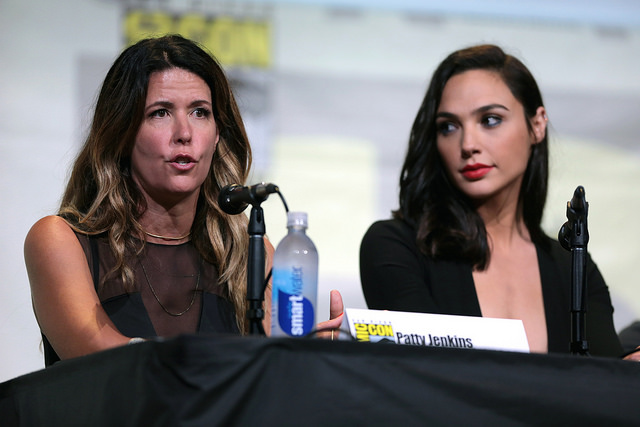 Two days before Wonder Woman opens, the blockbuster already has a 95% percent rating on Rotten Tomatoes, making it the highest-rated superhero movie since The Dark Knight came out nearly a decade ago. The movie has been selling out a number of its all-women screenings, and its director, Patty Jenkins, has been working in Hollywood for 15 years. So why can’t Hollywood take this movie or the woman making it seriously?

Earlier today, The Hollywood Reporter tweeted a link to a profile on Jenkins, saying Warner Bros. is “gambling” on her by letting her helm a major movie.

#WonderWoman: Warner Bros. is gambling $150M with a filmmaker whose only prior big-screen credit was an $8M indie https://t.co/qpnKZheEef pic.twitter.com/LhidVdLxLd

The intro to the article opens by asking “Can Patty Jenkins make the superhero world safe for female directors?” A laughable question, sure, but they keep going, “Warner Bros. gambles $150 million on its first woman-centered comic book movie with a filmmaker whose only prior big-screen credit was an $8 million indie,” with a quote from Jenkins: “I can’t take on the history of 50 percent of the population just because I’m a woman.”

And yet she’s expected to. This is just one manifestation of the painful double standard that exists in Hollywood, an industry that is incapable of seeing women as filmmakers, rather than as a series of individuals who might finally prove to them that women can be filmmakers. The indie-darling-turned-blockbuster-director is nothing new, but those directors are almost always men, and they’re never talked about in the same way.

Hollywood throws millions at indie men ALL. THE. TIME. You don’t call those gambles, do you? https://t.co/WFfCOq12Hw

Take this sexist headline down. https://t.co/Z1bcovYOrS

Let me fix that for you: “Warner Bros. is smartly investing $150m in a director whose last film won an Oscar.”https://t.co/zYUTrpgdNT

Where were all the articles two days before their respective films’ openings, analyzing the gamble placed on Colin Trevorrow, Rian Johnson, Jordan Vogt-Roberts, the Russo brothers, or Marc Webb? When Fantastic Four tanked at the box office and with critics, Josh Trank wasn’t said to have ruined other indie directors’ chances at ever being given blockbuster opportunities. There were no articles about what that meant for the future of male-led comic book movies or male directors.

And let’s not forget that even when a women filmmaker has a critical and financial success under her belt, she’s rarely given this kind of opportunity to start with.

Oddly, the article acknowledges the double standard perpetuated by whoever crafted the tweet and intro paragraph perpetuating it. The writer points out that the movie is on track to at the very least, retain the usual superhero fanbase, and the more likely outcome is that she surpasses the precedent.

She writes toward the end of the piece, “the big question mark hanging over Wonder Woman isn’t whether a female director can make a successful superhero event movie; it’s whether a female superhero can upend that long-standing formula and do something that the male ones haven’t accomplished: expand the female base. And at this point, there’s no reason to suspect Wonder Woman can’t. After all, not all female superhero movies have to go the way of such bombs as Catwoman (or Elektra or Aeon Flux), just as not all male superhero movies go the way of Green Lantern.”

That feels about halfway to the point, but it still places an unreasonable burden on Jenkins. It still places her as being primed to either destroy future opportunities for women filmmakers and women-led films, or she’s the female film messiah, proving that women’s movies are more successful than men’s. The only reason so much is being placed on this one woman is because women are nowhere close to equal representation in Hollywood. For every Patty Jenkins getting this opportunity, you have dozens of men being handed franchises through mentorship channels that simply don’t exist for people that don’t remind those at the tops of their industries of themselves.

Jenkins, an acclaimed 14 year vet is a “risk” when Colin Trevorrow, whose ONE FILM was 0.7% the budget of JW, was shoe-in. This is why: pic.twitter.com/OQ3QcUkGyu

Patty Jenkins is not a gamble. She’s coming up through channels a lot less “risky” than her male peers. The problem is with the industry, first by maintaining this boys’ club culture; and then by continuing to use language like this. Hiring a super-successful television and indie film director to helm a superhero blockbuster is the norm, not a gamble. When major publications like The Hollywood Reporter push that narrative anyway, it’s not just lazy, it’s damaging, and it inevitably influences the way decision-makers think about these things.