He thinks it's a good thing! 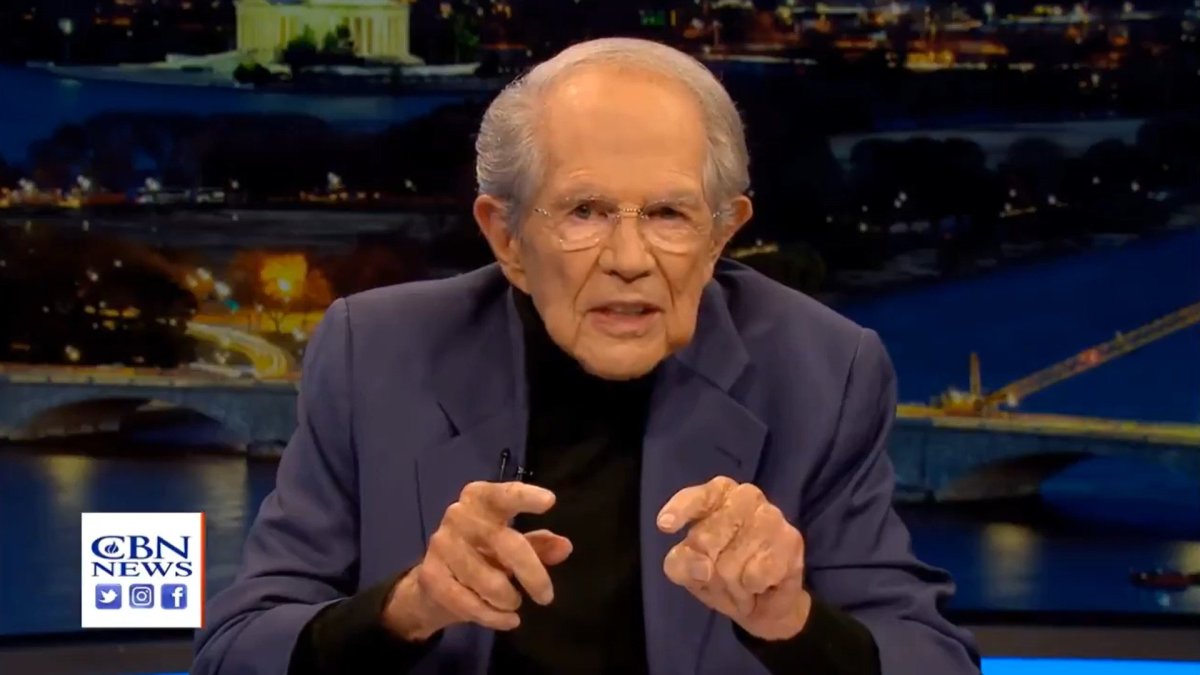 It might be the end of the world as we know it … and Pat Robertson feels fine. The 700 Club host and infamously virulent homophobe, Islamophobe, anti-semite, misogynist, and just plain con artist made waves on Satan’s own internet today by announcing that one, God had told him Donald Trump was going to win the election, and two, that it will lead to civil unrest and war that will ultimately jump-start the literal end times.

Pat Robertson reports that he has been told by God that Trump will win reelection … and it will bring about the beginning of the End Times. https://t.co/mH5ERpBFCs pic.twitter.com/8WcYGxR3eO

I mean, I don’t think he’s entirely wrong about the consequences of a Trump re-election but … is the end of the world a selling point? We know that Pat Robertson has been spewing BS for most of the 90 years of his life. After 9/11 he claimed America was attacked because God was mad at us for, IDK, letting gay people exist? And he’s been at the fore of calling Islam a violent political system. But his terrible anti-Islamic views actually play into this batshit theory that Trump is going to bring about the End Times. It’s based on a theory that’s very, very popular among Trump’s Evangelical base.

Robertson’s newest prophecy about the End Times (because he has made many such prophesies) comes from a nice talk he had with God recently where he was told that the election would go to Trump, leading to chaos and unrest and attempts on the President’s life and then that will be an opening for Islamic nations to attack Israel. But don’t worry, God will stop them and there will be peace … then I giant tribulation and we’ll get hit by an asteroid.

Honestly, Pat, it seems like we’re already in the tribulation, but the asteroid missed us.

The creepy thing here is Robertson playing up the End Times as a good thing. And it all has to do with Israel and his prejudiced views too. Many Evangelical Christians believe that Jesus is coming back, and soon (they’ve been thinking this way for a while!), but for that for such a thing to happen, Jerusalem will need to be controlled by the Jewish people. Secretary of State Mike Pompeo believes this and is all for these apocalyptic prophesies too.

This is something Donald Trump has played into, moving the American embassy in Israel to Jerusalem, because, just like pandering to QAnon adherents, pandering to those who believe his presidency will start the apocalypse has garnered him fervent, unquestioning support from people whose supposed views are against everything he does.

Because for Evangelicals, the End Times are a good thing and Donald Trump is their ticket to the rapture.

The idea that a war between specifically Iran and Israel will kick off the end of days is a key feature of Evangelical beliefs about the apocalypse and was popularized in the 90s by the Left Behind book series.  It’s something Evangelicals believe Trump will bring about, even though he is a corrupt and moralless leader. According to religious historian Diana Butler Bass, who spoke with Mother Jones earlier this year after Trump rattled his saber as Iran:

When Iran gets into the news, especially with anything to do with war, it’s sort of a prophetic dog whistle to evangelicals. They will support anything that seems to edge the world towards this conflagration. They don’t necessarily want violence, but they’re eager for Christ to return and they think that this war with Iran and Israel has to happen for their larger hope to pass.

So the BS that Robertson is pushing here is that Trump is going to do this, bring about this Islamic attack on Israel, and then: boom, time to call the Winchesters I guess.

Robertson and his ilk don’t care about the end of democracy or America or the millions of more lives that could be lost to COVID or this country’s reckoning with systemic racism. The Venn diagram between the Trump-Rapture believers and the QAnon adherents is probably almost a circle, because both theories are equally wild and predicated on the idea that Donald Trump, the literal worst man in the world, is somehow a chosen servant of God who will become a hero.

Robertson predicting Trump keeping power and the rapture is easy to make fun of, but it’s actually quite scary. Not because the world is going to end (it’s not, sorry) but because it explains so much about Trump’s levels of Evangelical support, given that he is the worst example of Christian out there.

Trump is a tool for them, a means of getting to the rapture. They’ve been sold this prophecy for decades and so rather than fix the earth we live on or help people, they are cool with letting a monster in the White House because that means they get to go be with Jesus. And Trump himself only cares that he can use these people, who he only has contempt for, as he has demonstrated behind closed doors. Here’s the Atlantic on Trump’s secret mocking and “cynicism and contempt” for his Christian base.

Let’s hope that the only End Times really coming are for these kinds of people being in power.