Captain America Is the Most Overrated Avenger by Fans

And what about villains? 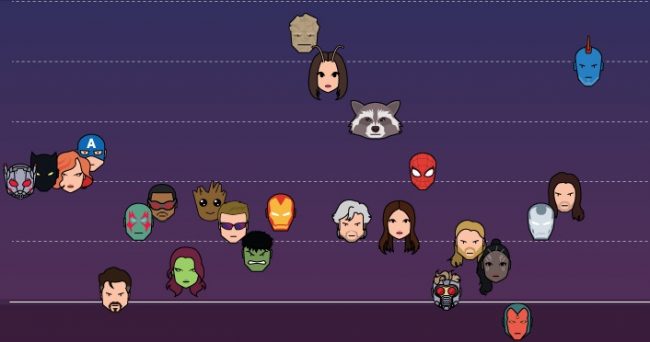 A fascinating analysis exposes the discord between how Marvel rates its superheroes and villains compared to fan opinions.

If you’re here because you’re angry at me saying Cap’s abilities are overrated, it’s not me, it’s math (I have an entire shelf dedicated to Captain America toys, so I can personally vouch for his high favor among the people). We got an exclusive look at the awesome charts that go with said controversial math. Prior to espying these graphics, I never thought I’d type the words “awesome charts” but there’s a first time for everything. Look at their tiny perfect faces!

The team over at Yellow Octopus put together a deep dive that compares Marvel’s character rating database with those same ratings as chosen by fans. I’ll let them explain how they generated said awesome charts:

Marvel retains an exhaustive and official database of its characters, documenting their backstories, battles, and alliances over time. As a part of this trove of character information, Marvel maintains a rating scale of 1 to 7, assessing the degree to which each hero or villain possesses a number of valuable traits: intelligence, strength, speed, durability, energy projection, and fighting skills.

There’s a catch, however: Fans can rate each character on these criteria as well, and their opinions can often differ wildly from the official ratings. In this project, we’ll explore just how much fans confirm or reject what Marvel says about its own characters and investigate where the greatest differences lie. Ready to see where Marvel fans are calling the official ratings flawed? Let’s do this. 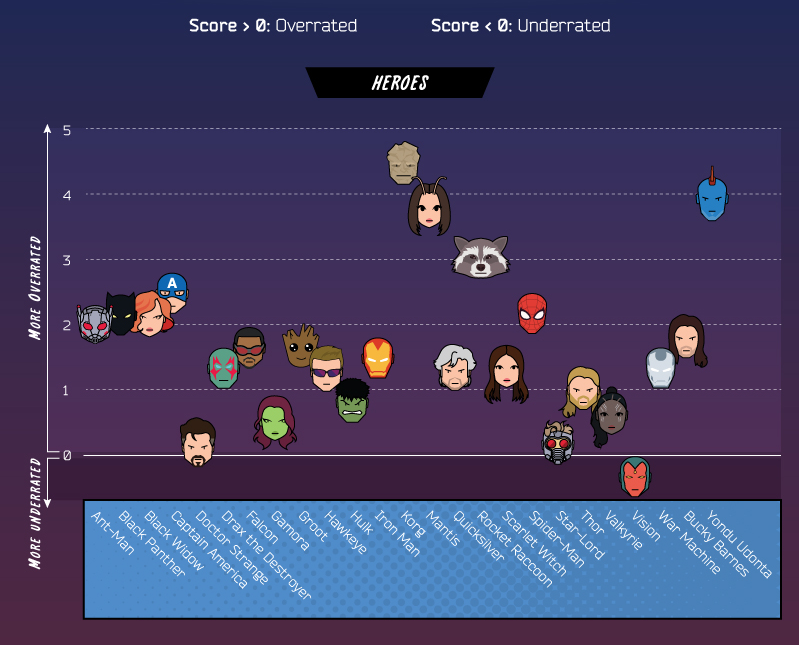 As your run-of-the-mill Marvel obsessive, I find these over/underrated charts intriguing indeed. While it’s not surprising that fans would lavish high points on many members of the original Avengers cinematic team, it seems like a lot of their other choices are ruled by emotion and personal opinion rather than a level-headed ranking based on the character’s displayed traits.

Just look at how fans have propelled Thor: Ragnarok hilarious standout Kronan Korg into the stratosphere, while Vision—a vastly powerful being capable of, well, almost anything—received a far lower rating on his abilities, likely reflective of the fact that we haven’t seen him in the MCU outside of Age of Ultron and Civil War and he wasn’t all too funny or endearing therein.

As Yellow Octopus puts it:

[…] fans have significantly different standards than do Marvel’s makers for their heroes – they’re far more glowing, in fact. In all but a few cases, fan scores for these characters were far higher than Marvel’s. This was particularly true for Korg, whose stock among fans was likely sent soaring by his scene-stealing appearances in “Thor: Ragnarok.” “Guardians of the Galaxy” pillars Yondu Udonta, Mantis, and Rocket Raccoon also ranked among the most overhyped heroes, although they weren’t the only superhero crew with inflated states. Fans were also far more generous than Marvel with several of the Avengers, especially Captain America and Black Widow.

If this is reflective of fans’ personal favorites and sentiments concerning our heroes, what about the villains? Fans also attributed higher ranked skillsets than Marvel’s official estimation to some surprising baddies. 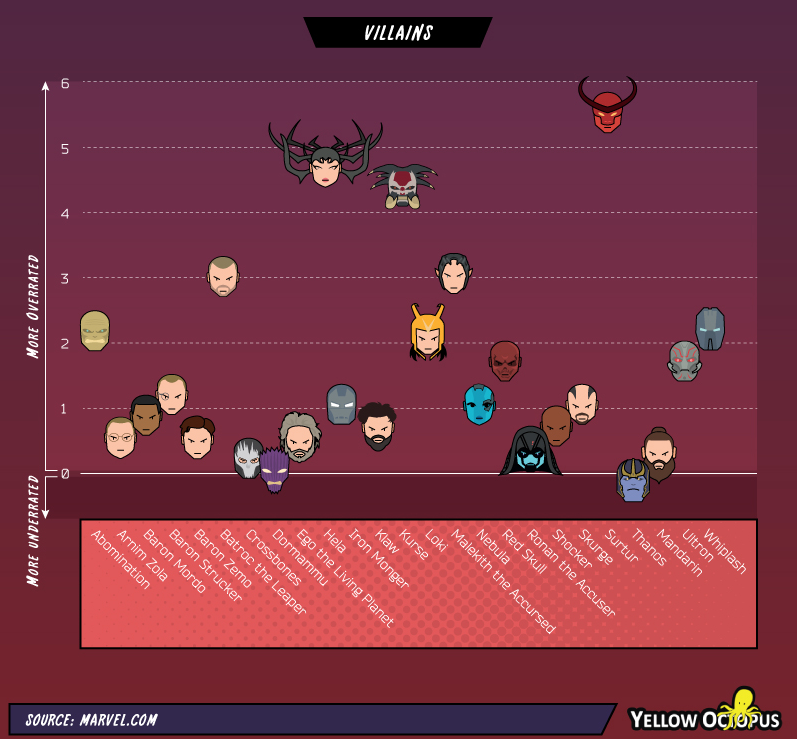 Some villainously inclined characters avoided fan score inflation, however. These included Dormammu and Thanos, who received relatively modest fan appraisals despite their powerful appearances in the highly regarded “Doctor Strange” and “Guardians of the Galaxy” films. Thanos will likely have an opportunity to bump his fan scores higher: According to the makers of “Avengers: Infinity War,” the villain is set to figure prominently in the next installment.

Should Marvel worry that the fans who love Marvel enough to rate characters don’t appear too impressed with Thanos’ abilities? Maybe they should bring Surtur back for Infinity War. (At this point I expect pretty much everyone and their roommate’s dog to turn up in Infinity War, so hey, you never know.)

If you’re curious about the areas where fans tended to give characters a bump vs. Marvel’s estimation, Yellow Octopus has that all charted out. 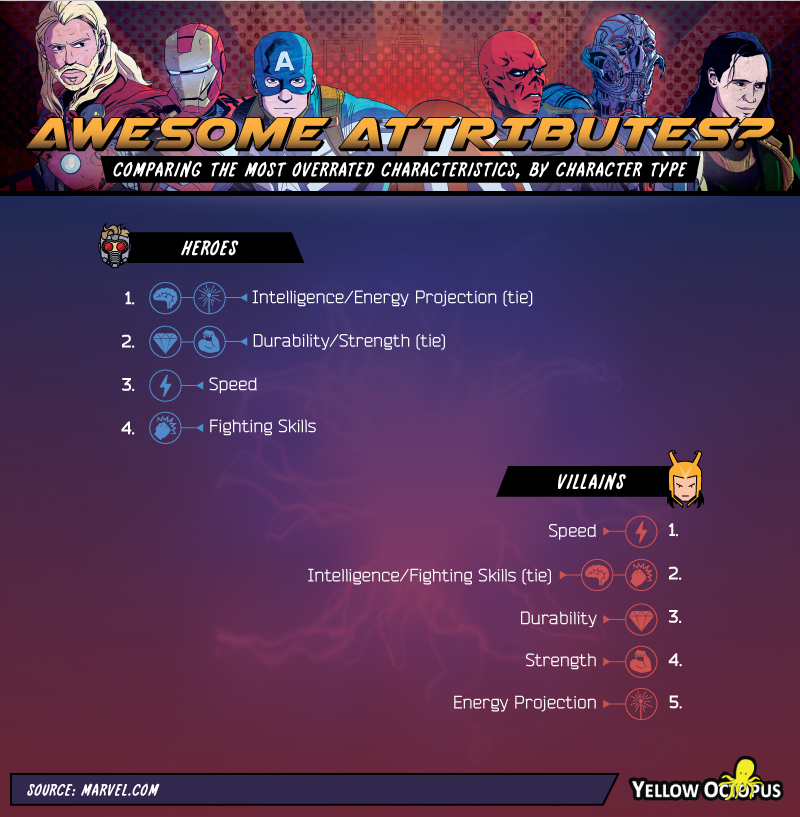 It looks like fans were ready to overestimate the allotted intelligence of their faves, which is an interesting trait to get a boost considering that so many MCU movies hinge on heroes’ strength and dexterity in general, plus their badassery in the final fight. On the flipside, when it comes to villains, Yellow Octopus found that fans tended to give them more credit in certain areas than Marvel accorded them:

Fans took issue with slightly different attribute ratings for villains, finding their speed far more impressive than Marvel’s own assessment. Certainly, plenty of evil characters possess remarkable agility, although they do have an inexplicable habit of slowing down to explain their devilish intentions instead of just executing their plots. Fighting skills and intelligence tied for the next most overrated villainous traits – after all, Marvel might say, there’s a reason they don’t often emerge from final battles victorious.

Click through to the full Yellow Octopus “study” to check out their methodology and gaze upon yet still more awesome charts. Ultimately, they conclude that “Marvel’s universe has inspired fandoms so intense that the public’s regard for these characters’ powers often exceeds the company’s own,” an idea that is immediately provable if you clicked on this article in indignation, ready to get into fisticuffs in Captain America’s honor.

“Perhaps there’s something glorious about fans refuting the official perception of these heroes and villains – in the collective imagination, awe for their abilities knows no bounds,” they write, and I couldn’t agree more. This comparison of official vs. fan estimations seems almost like a perfect visual representation of fandom, laid out in a chart—it’s a methodical example of the phenomenon of fans seizing onto characters and making them their own, canon realities be damned.

Now if you’ll excuse me, I think I need to go write a fanfiction where Korg takes on Surtur single-handedly since fan sentiment seems to suggest this is how Ragnarok ideally should have ended.