You Can Order KFC With Facial Recognition in China, But Maybe That’s Not Such a Hot Idea 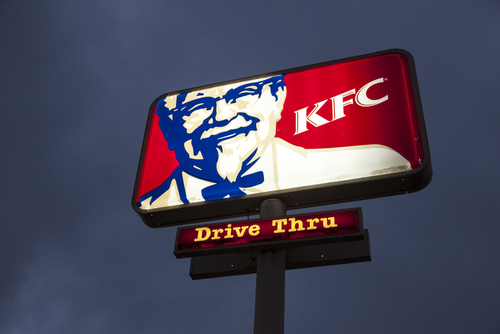 You know those BuzzFeed food quizzes that keep popping up on your Facebook? Sure you do, they’re the ones that say, “We Know When You’re Going to Get Married Based on Your Brunch Choices” or “We Can Tell Your Social Security Number Based on How Fast You Eat This Banana”? Okay, that second one sounds more ClickHole, but you get my meaning.

Apparently Baidu—otherwise known as the Google of China—has teamed up with KFC to create something similar. The difference, however, is that instead of answering questions on a website, you’re allowing them to scan your face, sending that data to some unscrupulous, unseen database in order to… wait for it… tell you what you should order at KFC. Yeah. Let that one sink in—sink in like a Famous Bowl. Like lead in your stomach. Uh-huh.

The recognition software judges your face and tries to discern a few things: your age and your gender, among others, according to the Baidu press release. It would then comb through suggestions and pre-seeded selections to offer you, and it’d be up to you to select what you’d like. According to TechCrunch, suggestions and categories can look like:

“a male customer in his early 20s” to order “a set meal of crispy chicken hamburger, roasted chicken wings and coke for lunch,” while “a female customer in her 50s” would get a recommendation of  “porridge and soybean milk for breakfast.”

Fascinating (read: bull-hockey gender essentialist) suggestions aside, one has to wonder who’s putting these suggestions together? Eventually, though, the machine recognizes your face and can just suggest your past options or trim down from there.

All that being said, wow, this is some utterly horrifying stuff.

Like, yeah, okay, it’s “just KFC” or whatever. But the idea that someone would be willing to give up some precious, personal biometric data to a faceless tech giant all because you can’t decide what to eat strikes me as a real ridiculous trade.

In case you aren’t aware, we’re often pumped for our personal data at nearly every juncture on the internet. While much of that data goes towards fairly innocuous things (suggestions, for one), the majority of that data is churned together to paint a picture of you as a person, a picture that can then be targeted for ad sales, profiling, or—as some tech writers have warned since the election—government surveillance.

CNNMoney’s Selena Larson wrote that “if even a small number [of data brokers] decide to cooperate in building human databases and sharing them for surveillance purposes, there could be damaging consequences for consumers.” While many tech workers have already signed a pledge that they would and will never help Trump build a “Muslim registry,” data brokers and data organizations haven’t all come out in opposition of assisting with such a registry.

Yeah, I know, it sounds very tinfoil-hat. But the truth of the matter is that when so many things on the internet are being offered for free, one has to wonder what’s actually being traded for ostensible “convenience.” Your personal data might very well be the very last thing that is well and truly yours. There’s absolutely no sense in giving it up because you can’t make your mind up at the KFC register.

Just get the damn extra crispy family meal like we all knew you were going to get and enjoy it. We won’t judge.