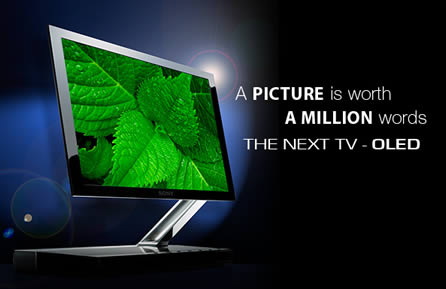 OLED, or organic LED, is one of the favored geeky technologies of our time: it’s still well on the early side of the innovation adoption curve, but the promise of low-energy, high-light and high-contrast diodes for the screen or monitor of your choice is hard not to love. They’re already becoming increasingly common in cell phones and other mobile devices: Problem is, as with many early technologies, OLEDs are expensive.

A lot of people were let down to discover that the iPad didn’t use OLEDs, contrary to rumors, but rather went with IPS LEDs. Now, OLEDs are being dealt another blow: Sony is discontinuing their OLED TV sales in Japan, citing “sluggish demand.”Reuters:

Sony said it had stopped production of ultra-thin TVs using organic light-emitting diode (OLED) technology for Japan, just a little over 2 years since it launched its first set. It plans to keep selling the TVs in overseas markets, a spokesman said.

It is still technologically difficult to make large OLED panels and to produce them cheaply, limiting their potential as a mass-market product. Sony’s only model is an 11-inch set sold for 200,000 yen ($2,222) in Japan, considerably smaller and more expensive than other flat TVs.

“As flat panel TVs are getting bigger and cheaper, hurdles for OLED models have become higher, at least in the short term,” said Hisakazu Torii, vice president of Japanese TV market research at DisplaySearch.

Sony’s XEL-1 OLED TV will still be available for purchase in the US and Europe, but the discontinuation of Sony’s OLED in Japan is definitely bad news for OLED TVs and consumer OLEDs as a whole: if one of the biggest and earliest OLED pushers can’t sell their TV in one of the most early adopter-friendly countries in the world, it’s a fairly sure indicator that the bad economy and timider companies will conspire to play it safe with less cutting-edge tech, at least in the near future.

Also, How Stuff Works has a nice tutorial on how OLEDs deliver brighter light while using less power. (Hint: it involves that organic “O.”)