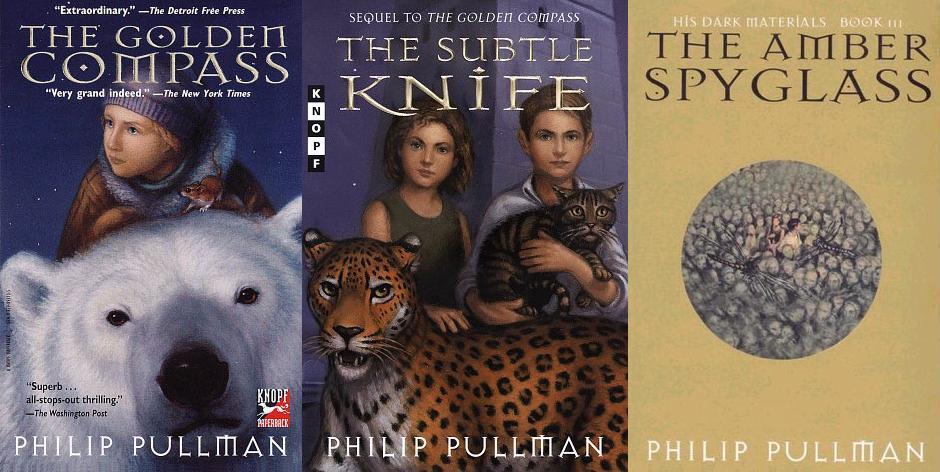 All too often, online communities can be hotbeds of infighting and insults. That’s why it’s especially heartwarming to watch hundreds of strangers come together and open their wallets for a single cause: ensuring that Nur Huda el-Wahabi’s name finds its way into Golden Compass author Philip Pullman’s next book.

This pure outpouring of humanity feels like a balm to the soul after what seems like an endless cycle of sour news. Here’s what went down: Authors for Grenfell, an online auction set up to benefit victims of the horrific tower fire disaster, is comprised of “authors, editors, agents and publishing people who have generously donated items and time for auction” to raise money.

One donated “item” came from Philip Pullman, who offered the right to name a character in the second part of his upcoming highly anticipated The Book of Dust trilogy. This was the auction description: “This book will follow the first part of THE BOOK OF DUST, ‘La Belle Sauvage’, which will be published in October this year. The second part (not yet titled) will follow next year. The right to name a character doesn’t guarantee that he or she will be good, bad, beautiful or otherwise, but it will be a speaking role with a part to play in the plot.”

This was a tempting offer to many, to be sure! But then a man named James Clements posted his bid, and the auction became a coming-together of goodness and generosity. 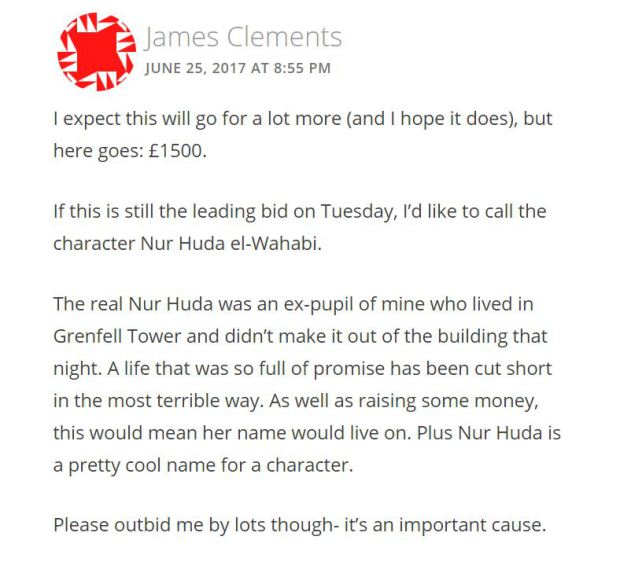 “The real Nur Huda was an ex-pupil of mine who lived in Grenfell Tower and didn’t make it out of the building that night. A life that was so full of promise has been cut short in the most terrible way. … [t]his would mean her name would live on. Plus, Nur Huda is a pretty cool name for a character. Please outbid me by lots though—it’s an important cause,” Clements wrote.

Rather than have anyone outbid him, however, every single subsequent donation and post—amounting to hundreds of comments—were from people adding to Clements’ bid on behalf of Nur Huda. The current high bid is an incredible £32,138 raised in Nur’s name and memory. As no one else has suggested a name since Clements posted about his former pupil, we’ll be seeing Nur Huda el-Wahabi one day in The Book of Dust.

The goodwill on display here—and the groupthink mentality united on the side of celebrating a life cut short too soon—is just so, so lovely to see. Scrolling through the comments on the Authors for Grenfell auction will go a long way towards restoring your faith in humanity. Here’s just a handful:

Lachlan
JUNE 27, 2017 AT 11:58 AM
I bought books from the school fair today. I want to see Nur Hada live as a character in a book I can buy one day in my school’s book fair. Please add 10 GBP to James’ bid. Would love to see other children post bids!

My heart, it hurts and also has grown about three sizes from reading these.

After his plea gained such attention and reaction, James Clements came back into the comments and wrote:

I know this space is meant to be for bids only, but as it after 8.00pm, perhaps I’ll be forgiven just this once.

I just wanted to say a huge thank you to everyone who has contributed to our shared bid for Nur Huda. Whether it was £5 or £5000, your contribution has become part of our whole team effort and I’ll be forever grateful to you. The money that you’ve donated will go to help people who have lost everything.

The world hasn’t always seemed like a very nice place in recent times, but this whole business has demonstrated how many wonderful people there are around and how much good can be achieved if we all work together. Thank you.

Great work, team. We did it.

Great work indeed, team Internet. While I’ve been excited for Pullman’s The Book of Dust, a trilogy that will “stand alongside” the original bestselling His Dark Materials and feature original heroine Lyra (and daemons!), there’s a whole new kind of anticipation now.

Clements described Nur, whom he taught when she was 9 and 11, as “wonderful. Joyful, hard-working, fun and always keen to help. Her family were delightful, too.” I look forward to reading Nur Huda el-Wahabi’s name in Pullman’s pages in the future, and being reminded of a bright life and the kindess of strangers.

(via The Independent, image: Knopf)