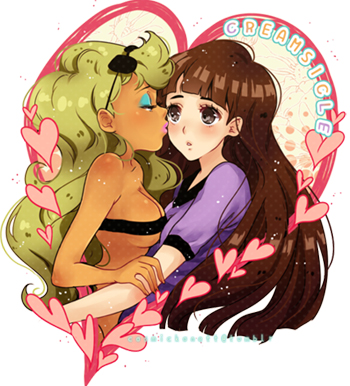 Ah, Tumblr, land of possibility. Where large fandoms become generational phenomenons, and unlikely smaller ones explode into supernovas of animated gifs. And where, if you’re a misunderstood satire that initially garners a bevvy of outraged responses, you can spawn a full-fledged internet meme-turned-actual fandom in less than 24 hours.

It all started when Tumblr user beekkake [intermittently NSFW], perhaps in response to recent sexist trends across the internet (such as these takes on the female audience for The Avengers), decided to mock the “me v/s THAT WHORE” dichotomy that pop culture, even geek culture, expects girls to participate in and perpetuate.

In other words, using proper tumblrspeak, she made a cute picture that got taken out of context with amazing results.

“This is for all the real girls out there,” Beekkake jeered. But Tumblr, ever the land of hasty reactions, quickly took the image seriously and burst into outrage at the depiction of the “real girl” and the “other girl.” “Other Girl,” with a spray-tan, a Facebook fetish, and no evident geek cred, seemed the stereotypical “hot chick,” while “Real Girl,” with her “just right” Tumblr savvy pastiness, was perhaps a more uncomfortable stereotype of the exclusiveness and privilege of white geek culture.

At first it seemed this kerfuffle would go the way of all Tumblr wanks, complete with accusations of point-missing, taking things too seriously, and lots of mocking. But then user tokimekiwaku offered up the inevitable fan viewpoint: “I dunno you guys…I think they should make out……”

And thus a ship was born. 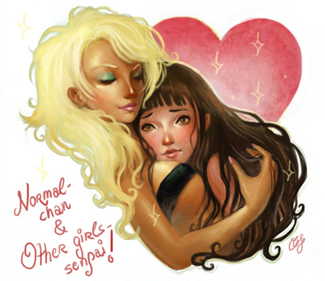 Quickly taking the form of endless shoujo manga tropes, Other-Girl-San/Normal-chan spread like wildfire across Tumblr yesterday, the initial post growing to 25,000 likes and reblogs as Sunglasses & Snowflake (Sunny and Snow) crossed the internet cultural divide, making meta and making out. Given fandom’s enormous predilection for pairing opposites, there was more than enough canonical material in Beekake’s original picture to boost this particular ship, and the results, even for Tumblr, are a bit mindblowing. Dubbing the ship “Creamsicle” after the yummy orange-and-white sherbert, Tumblr produced in slightly over 24 hours:

The immediacy of hivemind creation surrounding this mini-phenom speaks to the incredible savviness fans have of how the creation of fandoms works. As a body, fans have become so good at the production of fanwork, the assimilation of ideas, the collective language surrounding their fandoms, and the overal apparatus of enthusiasm, that they don’t necessarily need a substantial canon to participate in the act of being fannish. Apart from being a fanthropologist’s wet dream, the overnight popularity of this ship definitely contains a hint of defiance. As user mephitztophel commented, “I think what I love most about the Creamsicle shipping is how it subverts the idea that girls have to be pitted against each other.”

Whether satire and meta alone can fuel a ship without a “real” canon, is, of course, a different question. But there’s a definite advantage and a freedom that comes from working with flimsy source material. Don’t write these two lovebirds off just yet. And definitely don’t write off the enormous creative energy of fandom to make something out of nothing–and then make it unbelievably awesome.