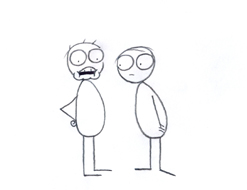 The short film was made in between the second and third parts of Hertzfeldt’s “Bill trilogy” (for more on that, check out the gushing fanboy post I wrote on the first part here). Unlike the relative seriousness of those films, Wisdom Teeth is Hertzfeldt back to his “adorable stick figures do surreal and terrible things to each other” roots. In fact, asides from its length, it could easily be nestled in amongst the “failed ads” in Rejected.

Here’s how Hertzfeldt’s site describes it:

The short will next be turning up on Showtime television in the United States. Share with friends and enemies. All apologies.

Originally completed last year, Wisdom Teeth was first spotted as a surprise conclusion to the last three Evening with Don Hertzfeldt touring programs in Ottawa + Montreal in October 2009 (ominously introduced here). In January 2010 it drunkenly revealed itself at the Sundance Film Festival, punched a woman in the mouth, and ran off into the snow without pants. It next showed up at the Santa Barbara Film Festival, where it stumbled into the room cursing God with vodka on its breath. The short allegedly made a lewd gesture before disappearing again in a cloud of biting ants.

Makes sense. Check out the short, uploaded to Showtime’s YouTube below: