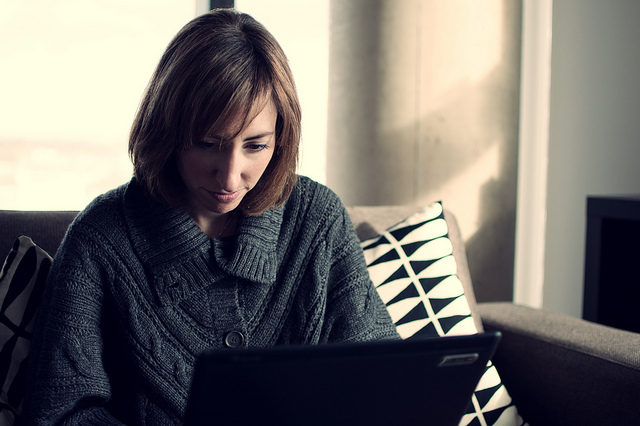 I know I do it all the time: “I’m just writing to say…” or “Sorry to bug you, but…” or “This would be the best way to handle it, I think.” Women have a tendency to pad their opinions with qualifiers designed to make them seem “less pushy,” but which also minimize what they have to say and take away their power. Now, a new Chrome extension has been designed to help fight this gendered tick.

It’s called the Just Not Sorry app, and it works by underlining self-minimizing or demeaning words or phrases in your emails like “I’m no expert,” or “actually.” If you hover your mouse over the underlined word, it will give an explanation as to why you might want to reconsider your word choice, usually in the form of an inspiring, explanatory quote from women like Tara Mohr (“‘Just’ demeans what you have to say. ‘Just’ shrinks your power.”) and Sylvia Ann Hewlett (“Using sorry frequently undermines your gravitas and makes you appear unfit for leadership.”).

The app was created by a woman named Tami Reiss, whose New Year’s resolution is to temper her own use of these minimizing words and phrases. What’s more, she hopes to get 10,000 other women to download the app and join her in making their communication more direct and less apologetic. Since Just Not Sorry launched on December 28th, 5,000 people have downloaded the extension, and 2,000 have signed the New Year’s resolution pledge.

Christina Cauterucci, who wrote a piece on Just Not Sorry over at Slate, brings up the excellent point in that too often women are told to control or change their behavior when that behavior is caused by a sexist society that trains women to not take up space or be “bossy,” and so the idea of the Chrome extension bothers her a bit, and she notes that the its explanatory quotes could be a little “less blame-y.” I can certainly see that. Obviously, gendered ticks like this are the product of centuries of programming, and we certainly shouldn’t ignore those root causes in feminist discussion.

However, Just Not Sorry is simply a tool, one that women can use if they decide they want to buck the programming and take matters into their own hands. That kind of control is certainly not a bad thing to want either. Because yes, we speak this way because we’ve been trained to — but that doesn’t mean that we shouldn’t attempt to remedy it once we realize how we’re perceived when we do.

Here’s to more women being forthright in their emails, rather than having them sound like this:

Will you be downloading Just Not Sorry?