Earliest Cave Paintings May Not Be From Humans 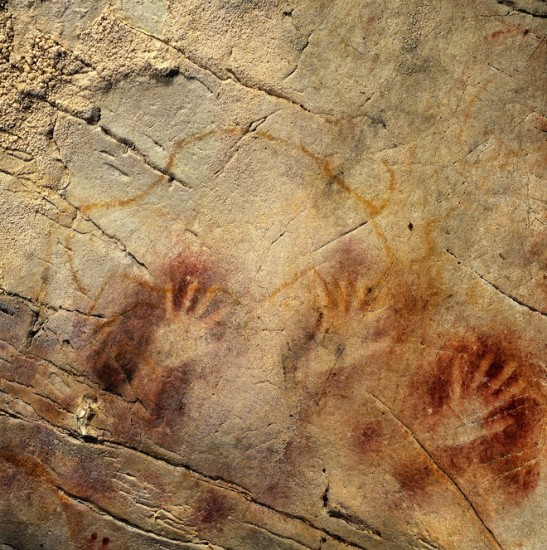 Famous cave paintings that mark the walls of Europe may not actually be the first example of humanity’s artistic prowess — in fact, Neadenthals may be Earth’s earliest painters.

The widely known cave paintings, which largely depict hunters, animals, and handprint outlines, were originally thought to date back 30,000 years ago. However, this date may prove incorrect in light of novel technology that uses the thickness of mineral deposits, not carbon dating, to measure the age of these early masterpieces.

João Zilhão, an archaeologist at Spain’s University of Barcelona, and Alistair Pike of the United Kingdom’s University of Bristol dated 50 paintings in 11 Spanish caves. According to Wired, “some handprint outlines are at least 37,000 years old. Several red circles are at least 41,000 years old and may be several thousand years older. That’s 10,000 years older than paintings in France, which until now were considered the oldest cave art.”  That would mean that if these paintings had been done by modern humans, they would have had to arrive in Europe with a tradition of symbolic painting, something very unlikely based upon current archaeological knowledge. The alternative explanation is that they arrived in Europe and suddenly learned to paint, “raising the question of why such an important cultural leap occurred so suddenly, in that particular place.”

Or, perhaps these paintings weren’t created by Homo sapiens at all.

According to NPR, “Neanderthals did perform ritual burials. They made decorative beads and other ornaments. Pike also notes that DNA evidence now suggests that modern humans and Neanderthals interbred,” thus, the ability to make art shouldn’t come as too large of a surprise. If this hypothesis, which needs much more rigorous testing, proves to be true, “anyone…could walk into El Castillo cave and see a Neanderthal hand on the wall.”

However, not everyone is entirely convinced — archaeologists Pat Shipman, an expert on symbolic behavior, finds it doubtful that Neanderthals waited until about the time humans arrived to begin painting figures: “I find it easiest to assume that people who are already doing that moved into more figurative representations than thinking that an entirely other species of people suddenly came up with making figurative art.”

Either way, the prospect is exciting: with a little more time and testing, science just might bring us one step closer to our evolutionary relatives.

(via NPR and Wired.)