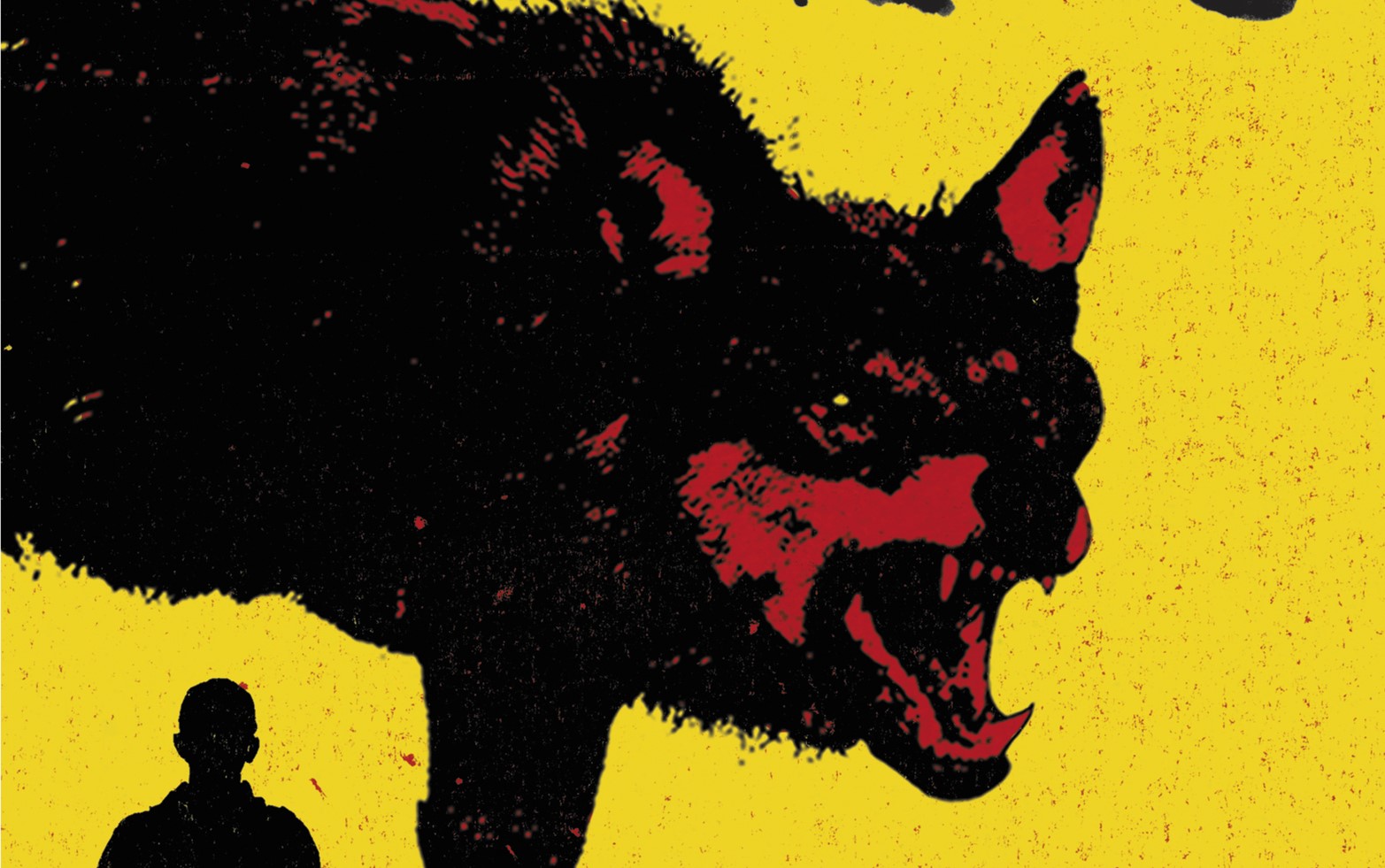 November is officially recognized as Native American Heritage month, and during this time, the contributions, history, and rich ancestry and culture of Native Americans is uplifted and celebrated. When it comes to storytelling, Native authors have some of the most breathtaking, imaginative, and powerful tales to tell.

And as genre fiction continues to evolve and expand to include more diverse stories and perspectives, we’re fortunate to witness the dazzling ways in which a classic tale or beloved trope can be transformed into something refreshing and utterly unique. The list below has been expanded to not only include some truly exceptional Native American authors, but talented Indigenous authors from across the world. Rest assured, there are more than a few gems to be found in these books that are undoubtedly trailblazing a new era of speculative fiction!

1. Trail of Lightning by Rebecca Roanhorse 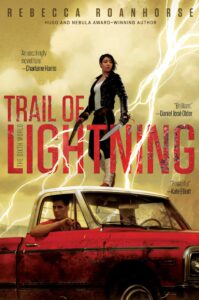 While most of the world has drowned beneath the sudden rising waters of a climate apocalypse, Dinétah (formerly the Navajo reservation) has been reborn. The gods and heroes of legend walk the land, but so do monsters.

Maggie Hoskie is a Dinétah monster hunter, a supernaturally gifted killer. When a small town needs help finding a missing girl, Maggie is their last—and best—hope. But what Maggie uncovers about the monster is much larger and more terrifying than anything she could imagine.

Maggie reluctantly enlists the aid of Kai Arviso, an unconventional medicine man, and together they travel to the rez to unravel clues from ancient legends, trade favors with tricksters, and battle dark witchcraft in a patchwork world of deteriorating technology.

As Maggie discovers the truth behind the disappearances, she will have to confront her past—if she wants to survive.

Welcome to the Sixth World. 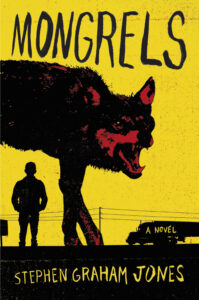 He was born an outsider, like the rest of his family. Poor yet resilient, he lives in the shadows with his Aunt Libby and Uncle Darren, folk who stubbornly make their way in a society that does not understand or want them. They are mongrels, mixedblood, neither this nor that. The boy at the center of Mongrels must decide if he belongs on the road with his aunt and uncle, or if he fits with the people on the other side of the tracks.

For ten years, he and his family have lived a life of late-night exits and close calls—always on the move across the South to stay one step ahead of the law. But the time is drawing near when Darren and Libby will know if their nephew is like them or not. And the close calls they’ve been running from for so long are catching up fast, now. Everything is about to change.

A compelling and fascinating journey, Mongrels alternates between past and present to create an unforgettable portrait of a boy trying to understand his family and his place in a complex and unforgiving world. A smart and innovative story—funny, bloody, raw, and real—told in a rhythmic voice full of heart, Mongrels is a deeply moving, sometimes grisly novel that illuminates the challenges and tender joys of a life beyond the ordinary in a bold and imaginative new way. 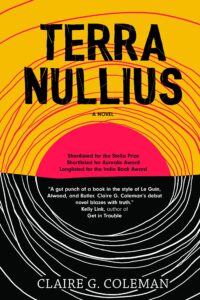 The Natives of the Colony are restless. The Settlers are eager to have a nation of peace, and to bring the savages into line. Families are torn apart, reeducation is enforced. This rich land will provide for all. 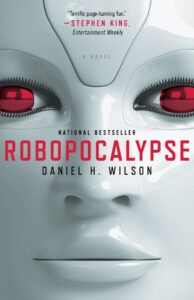 In the near future, at a moment no one will notice, all the dazzling technology that runs our world will unite and turn against us. Taking on the persona of a shy human boy, a childlike but massively powerful artificial intelligence known as Archos comes online and assumes control over the global network of machines that regulate everything from transportation to utilities, defense and communication.

In the months leading up to this, sporadic glitches are noticed by a handful of unconnected humans—a single mother disconcerted by her daughter’s menacing “smart” toys, a lonely Japanese bachelor who is victimized by his domestic robot companion, an isolated U.S. soldier who witnesses a “pacification unit” go haywire—but most are unaware of the growing rebellion until it is too late.

When the Robot War ignites—at a moment known later as Zero Hour—humankind will be both decimated and, possibly, for the first time in history, united. Robopocalypse is a brilliantly conceived action-filled epic, a terrifying story with heart-stopping implications for the real technology all around us … and an entertaining and engaging thriller unlike anything else written in years. 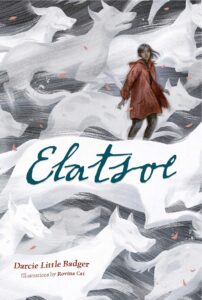 Imagine an America very similar to our own. It’s got homework, best friends, and pistachio ice cream.

There are some differences. This America been shaped dramatically by the magic, monsters, knowledge, and legends of its peoples, those Indigenous and those not. Some of these forces are charmingly everyday, like the ability to make an orb of light appear or travel across the world through rings of fungi. But other forces are less charming and should never see the light of day.

Elatsoe lives in this slightly stranger America. She can raise the ghosts of dead animals, a skill passed down through generations of her Lipan Apache family. Her beloved cousin has just been murdered, in a town that wants no prying eyes. But she is going to do more than pry. The picture-perfect facade of Willowbee masks gruesome secrets, and she will rely on her wits, skills, and friends to tear off the mask and protect her family.

6. Future Home of The Living God by Louise Erdrich 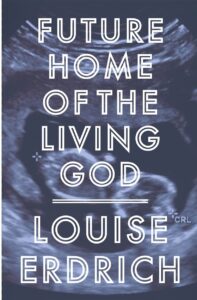 Louise Erdrich paints a startling portrait of a young woman fighting for her life and her unborn child against oppressive forces that manifest in the wake of a cataclysmic event in this dystopian novel. Twenty-six-year-old Cedar Hawk Songmaker, adopted daughter of a pair of Minneapolis liberals, is as disturbed and uncertain as the rest of America around her. But for Cedar, this change is profound and deeply personal. She is four months pregnant.

Though she wants to tell the adoptive parents who raised her from infancy, Cedar first feels compelled to find her birth mother, Mary Potts, an Ojibwe to understand both her and her baby’s origins. As Cedar goes back to her own biological beginnings, society around her begins to disintegrate, fueled by a swelling panic about the end of humanity.

7. Empire of Wild by Cherie Dimaline 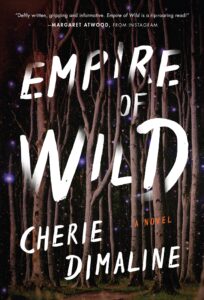 Broken-hearted Joan has been searching for her husband, Victor, for almost a year–ever since he went missing on the night they had their first serious argument. One terrible, hungover morning in a Walmart parking lot in a little town near Georgian Bay, she is drawn to a revival tent where the local Métis have been flocking to hear a charismatic preacher named Eugene Wolff. By the time she staggers into the tent, the service is over. But as she is about to leave, she hears an unmistakable voice.

She turns, and there Victor is. The same face, the same eyes, the same hands. But his hair is short and he’s wearing a suit and he doesn’t recognize her at all. No, he insists, she’s the one suffering a delusion: he’s the Reverend Wolff and his only mission is to bring his people to Jesus. Except that, as Joan soon discovers, that’s not all the enigmatic Wolff is doing.

With only the help of Ajean, a foul-mouthed euchre shark with a knowledge of the old ways, and her odd, Johnny-Cash-loving, 12-year-old nephew Zeus, Joan has to find a way to remind the Reverend Wolff of who he really is. If he really is Victor. Her life, and the life of everyone she loves, depends upon it.