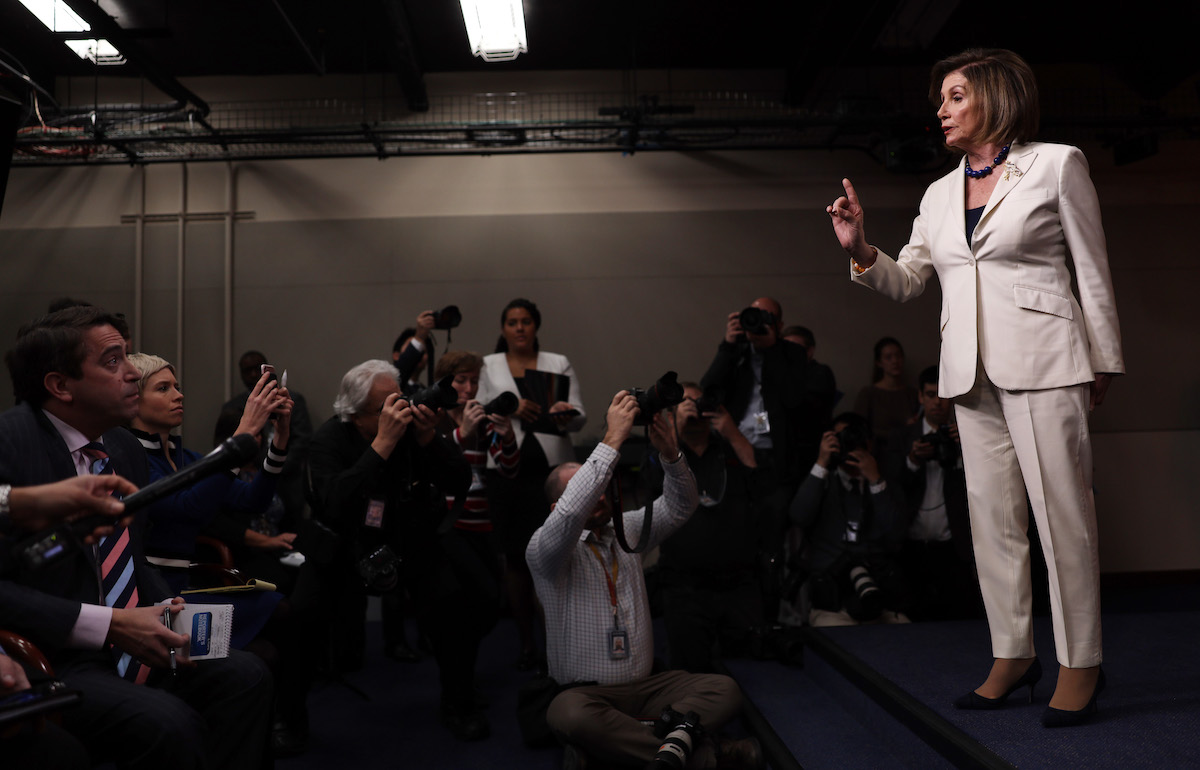 “The facts are uncontested,” she said in a speech Thursday. “The president abused his power for his own personal political benefit at the expense of our national security, by withholding military aid and crucial Oval Office meeting in exchange for an announcement of an investigation into his political rival.”

“If we allow a president to be above the law, we do so surely at the peril of our republic,” said Pelosi.

Later, at a news conference, Pelosi shut down a reporter who asked if she “hates” Trump. That’s a common Republican talking point, and one Trump himself has repeated ad nauseam–the idea that it’s not Trump’s possible crimes or their own love of country pushing Democrats to pursue impeachment. They just don’t like him.

The comment seemed to have really angered Pelosi. She was almost out the door when she stopped to address it. “I don’t hate anybody,” she said. “I was raised in a Catholic house, we don’t hate anybody—not anybody in the world. So don’t you accuse me of any [hate].”

I’m guessing everyone out there knows some pretty hateful Catholics, but I get her point.

A reporter asks Nancy Pelosi if she “hates the president.”

“I don’t hate anybody,” she says in a strong response. “As a Catholic, I resent your using the word hate in a sentence that addresses me…Don’t mess with me when it comes to words like that.” https://t.co/bsfJRKZ0IN pic.twitter.com/DfSs9d2T33

I love that from there, Pelosi doesn’t try to say that she likes Trump. She says exactly what she thinks of him.

“I think the president is a coward when it comes to helping our kids who are afraid of gun violence. I think he is cruel when he doesn’t deal with helping our dreamers of which we’re very proud. I think he is in denial about the climate crisis.”

“So don’t mess with me when it comes to words like that,” she finished.

That reporter, by the way, was James Rosen, who abruptly left Fox News last January amid claims of sexual harassment after spending 18 years at the network. He then landed at Sinclair Broadcasting, the media giant that forces local news stations to run pro-Trump propaganda segments.

“Do you hate the president” is a stupid fucking question to ask unless you’re a conservative-leaning reporter looking for a viral moment to replay over and over in the wingnut-o-sphere, so congrats to James Rosen of Sinclair (and formerly Fox) for doing his dumb job.

Nancy Pelosi reminding you she is from BAL.TI.MORE.