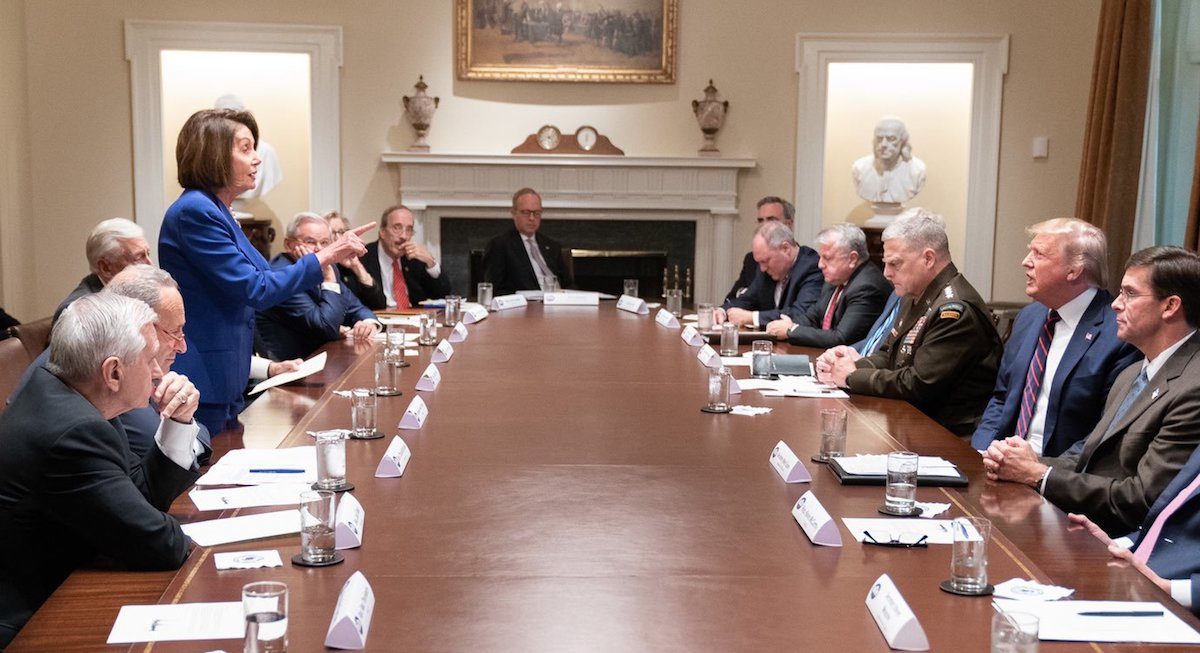 You might be wondering why there was suddenly a Twitter image battle between the president and the speaker of the house last night, but also maybe not; it’s 2019, and nothing makes sense anymore. Basically, there was an image released from a meeting between Nancy Pelosi and Donald Trump, and in it, she looks as if she’s laying down the law as she’s walking out, and Donald Trump looks disgusted (or maybe that’s just his resting face).

We don’t know what was being said, because we don’t get transcripts of those meetings, but we’ve since gotten a little more clarification of what went down. For Pelosi’s part, she said that she believed she was excusing herself from the room at the time of the photograph, calling out his reasoning for withdrawing troops from Syria for the hypocritical nonsense it was, and pointing out a disturbing connection to Trump’s seeming love of Russia.

Speaker Nancy Pelosi: Pres. Trump said he was withdrawing troops from northern Syria because he promised to bring the troops home.

"My question to him was: Is Saudi Arabia home?" https://t.co/gcanaW9HCX pic.twitter.com/H0xmAEz9o5

The image got traction on Twitter when Donald Trump used it as “proof” that he didn’t throw a fit over Syria, but rather, Pelosi did. (I guess, in his eyes, making a point while standing up is having a meltdown now?) So, in the bossest of moves, Pelsoi took the “proof” that Trump shared and made it her Twitter cover photo.

Now that the photo has been circulating, many are linking it back to a famous meme. Why? Because, well, it fits perfectly.

The meme went on and even grew from Anand Giridharadas’ comments on the iconic picture.

This is a photo thousands of years in the making. Her power, her finger, his visible disgust at her power.

This is a photo thousands of years in the making. Her power, her finger, his visible disgust at her power. pic.twitter.com/iQdHUXya6y

I mean, look. This is all slightly terrifying to me. The President is currently under scrutiny, the subject of an impeachment inquiry, is lashing out, and we’re all making Twitter jokes about it because what else can we really do? Am I glad that Pelosi is using the childish antics of the president of the United States to her benefit? I mean, yes, that’s something I would love to do myself, but at the same time, Trump has the nuclear codes and is getting angrier and more out of control by the day, so I laugh and then I cry and then I log off the internet for days and pretend like nothing is wrong when things like this go off.