Except this party's packed with Academy Awards winners and nominees.

Ensemble movies are quite the Thing To Do these days, and Murder on the Orient Express is no different. It’s about as star-studded as they come, and this trailer is more than happy to show that off to anybody who’s within earshot.

It’s not necessarily a bad thing, mind you. In fact, if you ask me, watching this cast interact might be half the fun of watching this film. Let’s see … you’ve got Daisy Ridley, Leslie Odom Jr., Michelle Pfeiffer, Penélope Cruz, Josh Gad, Willem Dafoe, Judi Dench, Lucy Boynton, and Olivia Colman, with Kenneth Branagh as the heroic detective, Hercule Poirot. Oh, and you’ve also got Johnny Depp here, but … yeah, you know what, the less we talk about that guy, the less we have to think about his allegedly heinous off-screen acts. Anyway.

Truth be told, I didn’t realize Branagh was playing Poirot. Chalk it up to the fact that I haven’t had my morning cup of coffee yet, but with that mustache and beard, it’s pretty easy to mistake the guy for Ewan McGregor. I mean, here’s that shot of Branagh as Poirot:

And here’s a shot of Ewan McGregor sporting a similar mustache and soul patch (oh god) in Jane Got a Gun: 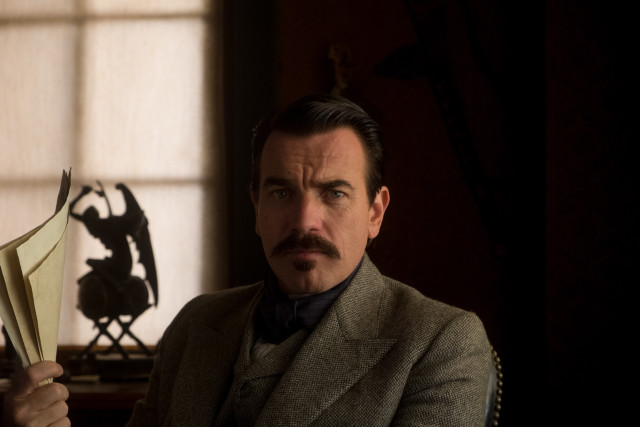 Am I right, or am I right? Maybe I just lose all sense of facial recognition when you slap a beard on someone, who knows. But I digress.

The trailer’s pretty sweet, and it introduces us to the entire motley crew. Everybody’s got their archetype and characters to fill, and while we’re not introduced to them in any kind of depth quite yet, it’s pretty easy to see that they’re going to have some interesting chemistry on this train. The official description of the film goes:

“A lavish trip through Europe quickly unfolds into a race against time to solve a murder aboard a train. Everyone’s a suspect as Detective Hercule Poirot sifts through 13 strangers to find the killer before another person ends up dead.”

So, you know. It’s like one of those murder mystery dinners, except it’s on screen and you won’t have to deal with that one friend who always drinks too much at these kinds of parties and ruins the immersion and everything when she starts whining about not being able to smoke on the train and seriously can you just not for once, Susan?

Murder on the Orient Express pulls into the box office station on November 10th.