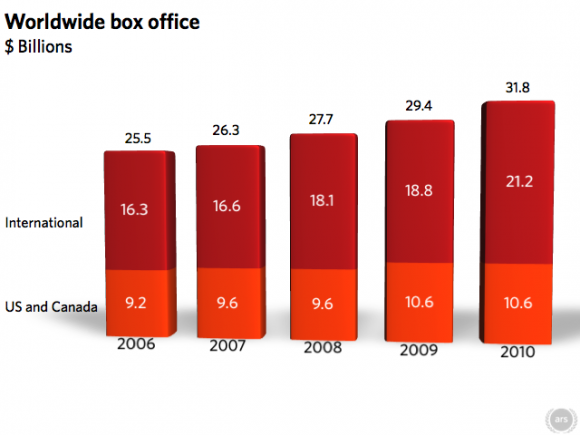 Despite raising the price of tickets by 39¢ and attendance at the more expensive 3D screens rising precipitously, culminating in an 8% growth of total revenue from the previous year…

The MPAA still wants us all to know that “It’s impossible to compete with free.”

Other amusing incongruities in their report include comparing the price of admission to the movies for a family of four (minus concessions, of course) to admission to a theme park.  Because it’s obviously more bang for your buck, despite being an experience that lasts 2-3 hours rather than a whole day.

Ultimately “though innovation and technology continue to be a positive force for the theatrical business, driving moviegoers towards higher value 3D entertainment,” said Pisano, “the continued theft of movies online will have a sustained adverse impact on movie attendance in the coming years.”

If you could stop piracy just by pointing out that it’s wrong, the sales of external hard drives would have tanked years ago.  Instead of insisting that pirates are damaging the industry while raking over piles of our cash, the MPAA should probably focus on an actually effective method of combating piracy: creating a legal experience that is superior to the illegal one.