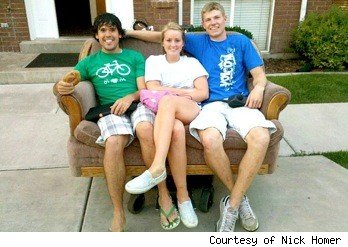 After the rug, the sofa is the most crucial staple of a college student’s dorm living experience. If only it could be taken beyond the walls of one’s room …

Well, Nick Homer and Rich Christiansen of Brigham Young University came up with an ingenious solution: Over a laborious three months, the two students created an automotive sofa, by attaching wheels and the motor of an old wheelchair. Attending BYU football games and whizzing up to fast food drive-through windows, it seemed like all the world was perfect from their cozy sofa viewpoint … until campus security came along.

After the motorized couch reportedly began drawing too much attention, the school issued a campus-wide ban on any type of couch transportation.

“Everyone was just kinda going nuts,” Homer told Asylum.com. “We had a line of about 10 cars backed up on the street and the police were called because we were blocking traffic. The police showed up after a few minutes and basically congratulated us on being awesome.”

Though the “vehicle” has been banned from campus grounds, the students still use it in town, even successfully infiltrating the Provo, Utah, Fourth of July Parade.

Homer continues to brainstorm other things to motorize: “We want to take the couch off eventually and put on a gondola … like from Venice. We’ll row around Provo and whenever we stop we’ll pull out an anchor. Also, we’d have a cooler leaking water inside of it so that there would be a stream of water following us everywhere in the streets.”