#BlackComicsMonth Creator Tee Franklin, A.K.A. MizCaramelVixen, Wants Your Stories of Mental Illness For Her New Anthology

Tee Franklin, known on the interwebz as MizCaramelVixen, is all about inclusiveness in comics. As you know, she was the brains behind the popular #BlackComicsMonth initiative, which puts the spotlight on comics with black protagonists and/or with black creators (bonus points for both!). Now, she has a new focus. One that is just as near and dear to her heart: ending the stigma surrounding mental illness.

To that end, Franklin is editing an anthology called #EndTheStigma: A Mental Health Anthology, a comics anthology that will give those who suffer from mental illness a voice through the medium she loves. There are already some heavy-hitters from the comics world who will be contributing stories of their own battles with mental illness, including Gail Simone, Christina “Steenz” Stewart, Scott Snyder, Ma. Victoria Robado, Erica Schultz, and Marguerite Bennett, among others.

However, she’s not only interested in what comic industry types have to say. She wants to hear from you. Yes, you. The one reading this. If you are someone for whom issues of mental health hit close to home, and you’re a comics creator, she would love for you to submit your story. Submissions for the anthology open September 30th and run through October 31st. 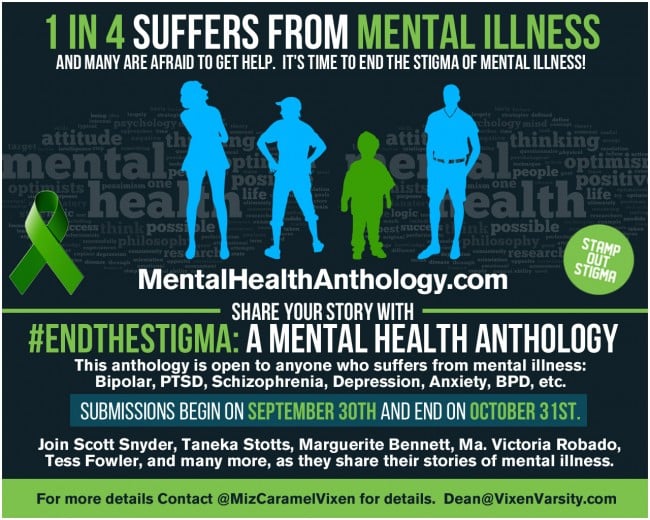 They are planning an IndieGoGo campaign to raise the funds to print the book in May of 2017. While this is a volunteer effort on all sides, Franklin plans to donate all proceeds (minus fees and the cost to print the book) to YCS (Youth Consultation Service) in New Jersey which, according to their press release, “offers an array of nurturing therapeutic, and life skills teaching residences for children, teens and young adults with emotional/behavioral health challenges, developmental and intellectual disabilities.”

“This anthology is a passion project for me,” Franklin said in a statement. “As someone who has been living with mental illness for decades, I want people to know that they’re not alone.”

Another contributor, Margaret Stohl, whom you may know as the writer of the YA Black Widow story, Black Widow: Forever Red, said “I am all about ditching the stigma of mental health” when asked to participate.

For more information on submission guidelines, and on the project itself, visit the website.