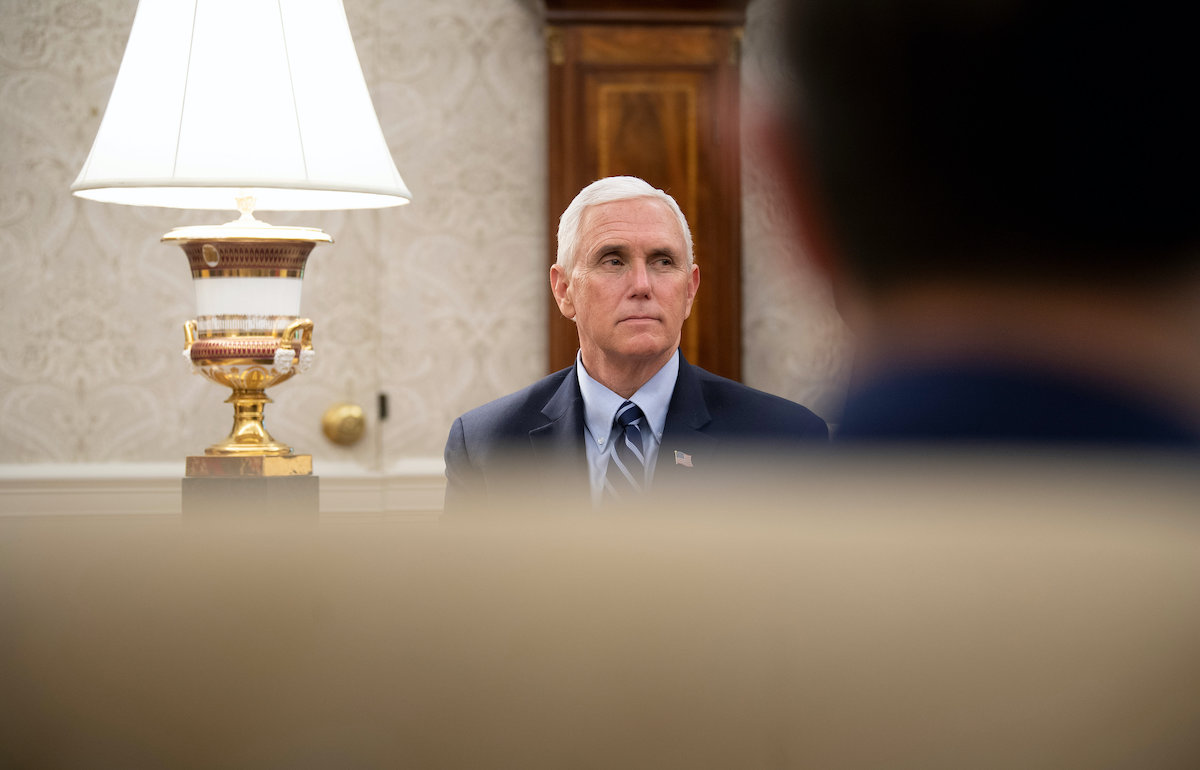 Last week, it was reported that a number of White House aides had tested positive for COVID-19, including one of Donald Trump’s personal valets and Mike Pence’s press secretary (and wife to Stephen Miller) Katie Miller.

Over the weekend, there were reports that Pence was self-isolating since Miller’s diagnosis means he’s been in frequent contact with the virus (as has the entire coronavirus task force and the White House press corps), but his office released a statement Monday saying that’s not actually happening—or if he was, it only lasted a weekend. A spokesperson says Pence will “will continue to follow the advice of the White House Medical Unit” but he “is not in quarantine.”

Vice President Mike Pence has arrived on White House grounds. He is not self-quarantining after an aide tested positive last week but is following advice of WH medical unit. Pence was spotted by CNN’s @JayMcMichaelCNN walking into the EEOB this AM with aides – none wearing masks pic.twitter.com/BuFqPlQsdK

It’s hard to imagine that’s actually true. Not only is Pence not isolating, he also hasn’t been social distancing, as we’ve seen by how close he stands to Trump and others during the coronavirus press briefings. And remember how he refused to wear a face mask when touring the Mayo Clinic? If that seemed like a selfish act, it gets worse as it turns out he’s also been insisting other people also don’t wear masks when meeting with him.

On Friday—the same day Katie Miller was diagnosed with the coronavirus—Pence met with religious leaders and a number of food industry executives, including from the meatpacking plants that have been overrun with the virus in recent weeks. He didn’t wear a mask to the meeting and as a report from The Intercept reveals, his office appears to have asked those executives to remove their masks before meeting with the VP.

The event was live-streamed so there’s video of the guests waiting for the roundtable to begin. You can see a staffer come out and very clearly make the request, complete with a gesture miming the removal of a face mask.

Pence and Trump have both defended their refusal to wear masks by saying they get tested regularly. First of all, that’s putting a lot of faith in those testing capabilities for a novel, potentially mutating virus.

Although Trump has already made it clear that he doesn’t trust/understand these tests in the slightest.

If you’re not pregnant and you take a pregnancy test, and it comes back negative,

But then later you get pregnant, take a test, and it comes back positive,

ALL of the tests are unreliable, and actually you were pregnant for years. https://t.co/u2pCl0nLOP

Once again, Trump and Pence are more concerned with projecting an image of toughness and defiance than they are with the actual health and safety of themselves, their staff members, and the general public.

(via The Intercept, image: BRENDAN SMIALOWSKI/AFP via Getty Images)