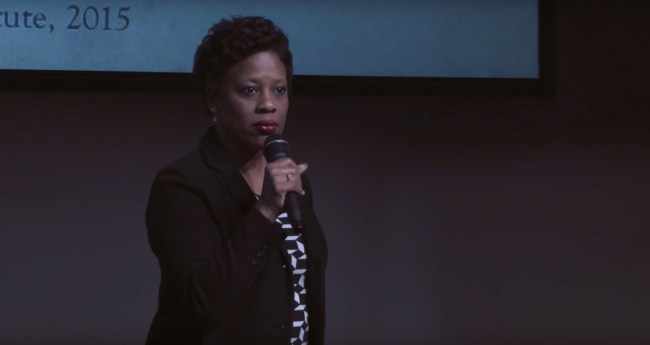 Michelle Ferrier, former journalist and now the associate dean at Ohio University, has an answer for women writers who are getting harassed online. When you ask yourself who you’re gonna call, now you can tell yourself: TrollBusters!

Ferrier’s TrollerBusters service, which describes itself as “Online Pest Control for Women Writers,” is a one-stop shop for helping women who’ve suddenly become targets of a viral internet hate campaign. When the proverbial cyber-Eye of Sauron turns towards you, it can be a lonely experience, and it’s one with which Ferrier is well familiar. In her former career before working at Ohio U, Ferrier was the only black female reporter at Florida’s Daytona Beach News-Journal. When she got abusive letters and threats in response to her work there, she reached out to authorities, but to her dismay, they didn’t take the threats seriously.

Ferrier described her experience to The Revelist: “I couldn’t get any organization really to take up the case and investigate. And so I began looking at what they had sent me, and began to discover that organized hate groups use this as a tactic for fear and intimidation.” Back then, Ferrier was getting angry letters. These days, journalists get online hate, but the results are much the same.

As The Guardian’s extensive research of their own commentariat has shown, black female journalists often suffer even more horrifying responses to their work than their white male peers. The Guardian has also published an article about Ferrier’s work, in which she discussed the unique pressures that she has faced in her field:

Stories of or by people of color tend to be targeted the most. It never matters what the topic is – we got the worst comments on a story about an African American family whose house had just burned down.

We’re talking about shutting down voices in media. Some journalists are not trained on these issues at all, and we don’t talk about the dangers of this job, both online and off.

What does TrollBusters do? The service will provide you with the information you need to lock down your private information online. Ferrier explains, “Third-party data about your address, from property records to voting records, is public information.” You can get this stuff taken down, but it’s a chore, and it’s one that you might need some help sorting out. Since you’re already stressed out as it is, TrollBusters will fill your feed with positive affirmations, which will make it a little easier for you to stay online and keep on trucking with your day job. Since the service is geared towards women writers and reporters, getting offline isn’t really an option since that’s your place of work, so TrollBusters is designed to make your virtual workplace feel like a more positive place.

Although Ferrier fights cyberbullying, she’s also an advocate against in-person forms of intimidation; harassment isn’t a new trend, as Ferrier knows well from having received angry letters so many years ago. Ferrier pointed to the recent tragedy in Orlando as an example of how the propagation of bigotry online can affect our “real” lives: “We really need all eyes on this issue, because it’s symptomatic of things that happen in physical space. We can’t deny the connection between what people see online and their behaviors in physical space. We’ve just experienced that this past weekend.”

TrollBusters, and other services like it, serve as one way to push back against the larger problem of systemic oppression, but they can’t do it alone. One way to fight back against that system is a free press made up of diverse journalists, and that’s exactly what Ferrier is fighting to preserve by giving journalists the tools they need to keep on going and not get burned out.