You don't get to tell me I was "unlucky." 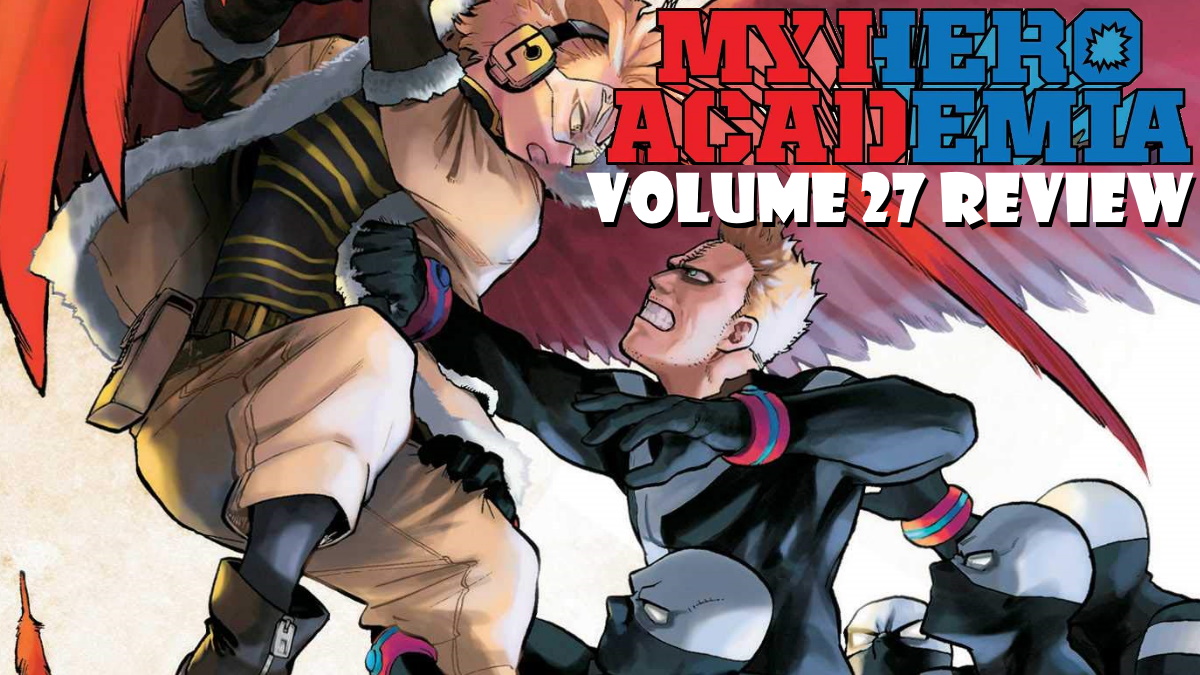 Things are really ramping up in the My Hero Academia universe, with this volume serving as a major jumping-off point for one of the biggest arcs we’ve seen yet.

Full disclosure: I read chapters weekly, so I already knew what was coming, but to sit and read it in one sitting means that everything hits you all at once. A LOT happens in Volume 27, and if you’re sticking with the anime or haven’t caught up in the manga yet, do NOT read this review (unless you don’t care about spoilers). Otherwise, it’s time to go beyond!

Synopsis for My Hero Academia Volume 27 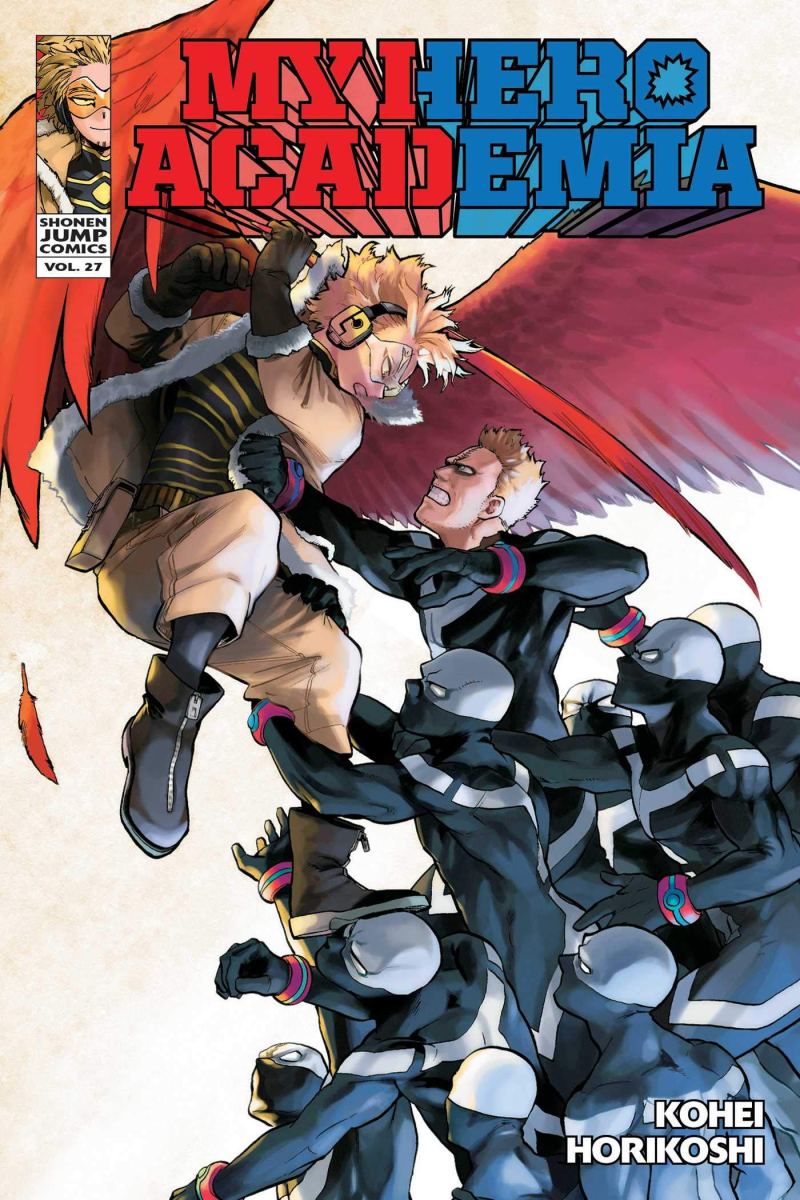 Because Izuku Midoriya’s hero story includes a full-on assault against a villain stronghold while still in high school (for the SECOND time because he also went up against the Yakuza), this volume kicks off the beginning of the heroes going up against the combined forces of the Paranormal Liberation Front (PLF) and the League of Villains (LoV). It’s an all-out war as pro heroes and students from U.A. head to two separate locations, one being Jaku General Hospital, where the manufacturer of the Nomu is (Dr. Ujiko, aka, Kyudai Garaki), and the other being the PLF mansion. Both groups move simultaneously, but are they strong enough to deal with what’s lurking in the hospital?

What exactly has the doctor been up to, and how will the LoV react when they realize how the heroes managed to find them?

The timing for this volume release is spectacular.

With the anime hitting the plot threads that start to delve into Hawks, this volume shows the payoff of him being a double agent. It also shows just how difficult it is to do that sort of thing. A lot of the art for Hawks this time around is cold, the complete opposite of the laid-back guy we’ve seen throughout the story. Horikoshi doesn’t just show a quick victory thanks to Hawks’s information; we get to fully see the effects of what he did, right down to the LoV reacting when they realize that Hawks betrayed them. 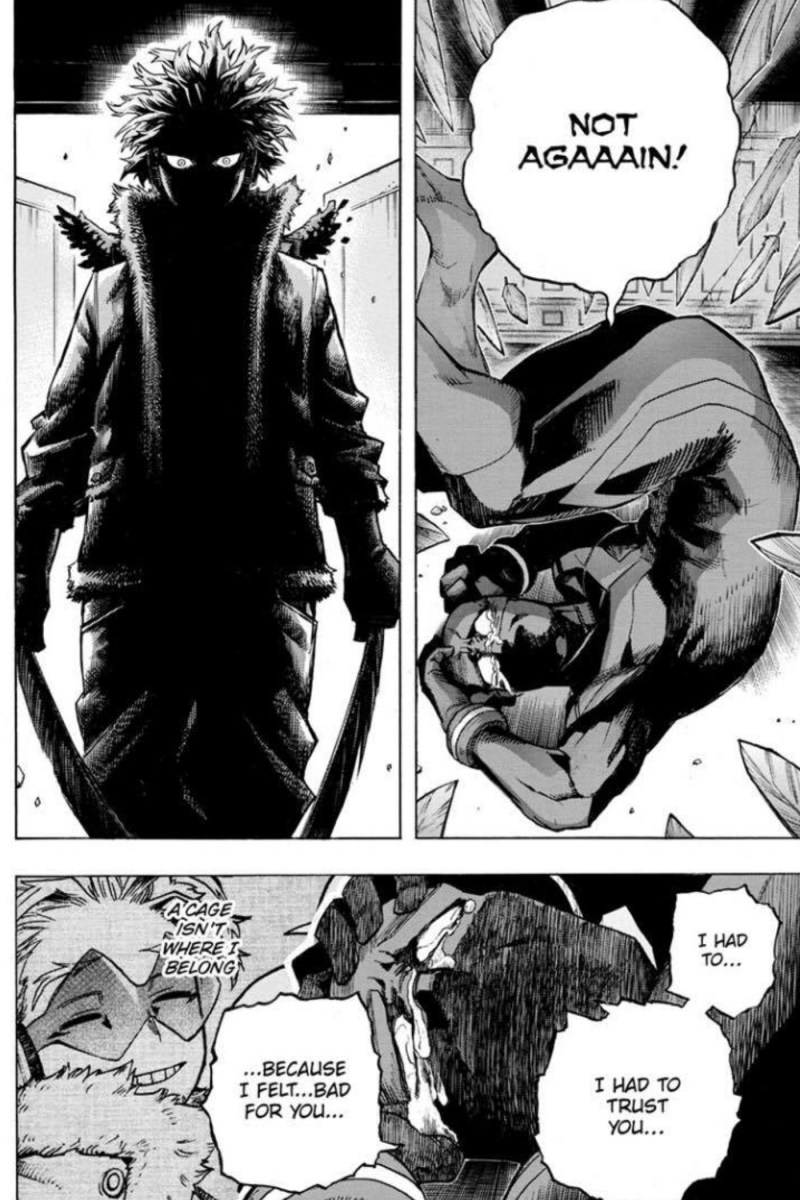 And really, that’s what makes this volume so good. We should be rooting for the heroes and should be happy that Hawks’s hard work will (hopefully) put an end to these dastardly villains. But since we see it from the LoV perspective, a group who we’ve gotten to know more personally, you actually feel bad as they realize that Hawks set them up.

After the volumes that give more detail about the League members (Volume 24 and Volume 25), this group feels a lot like the misunderstood kids who come together to make their own family. Certain members have been discriminated against due to their quirk, and at the point we’re at now in the story, we know that this society can be really fickle in who it praises. Heroes-in-training like Shinsou, and even Bakugo, have been side-eyed because of the nature of their quirk, so seeing a villain group that’s mostly made up of folks disregarded by society hits on something the series has been illustrating for a while.

It’s hard to have such a black-and-white definition of good and evil when you’re considered one or the other based on things you can’t control.

I’m not saying it excuses the crimes the LoV has committed, but characters like Shigaraki are very much an example of a discarded kid who was found by the wrong person.

Basically, All For One and the scummy doctor are on my hit list is what I’m saying.

By the way, I still cannot beLIEVE that the doctor from the FIRST episode is a mad scientist type working with All For One. I know, at one point, the fandom theorized about this, but I can’t believe it’s actually true! Thank shonen manga Jesus the doctor didn’t give two shits about chibi Izuku Midoriya.

The series has constantly questioned what makes a hero a hero. This volume does that, but it’s from the POV of someone who’s classified as a villain: Twice. Honestly, I can’t think of a better villain to call the whole system into question. Out of everyone in the LoV, Twice is probably the most sympathetic. When you stop and really look at him, you realize he’s just a guy who is trying his best, dealing with clashing personalities and trying to keep them all in check. He’s finally got a place he feels like he belongs, a place we’re all trying to find in life, so he’s trying to do right by all the other misfits who struggled to find somewhere that didn’t judge them. 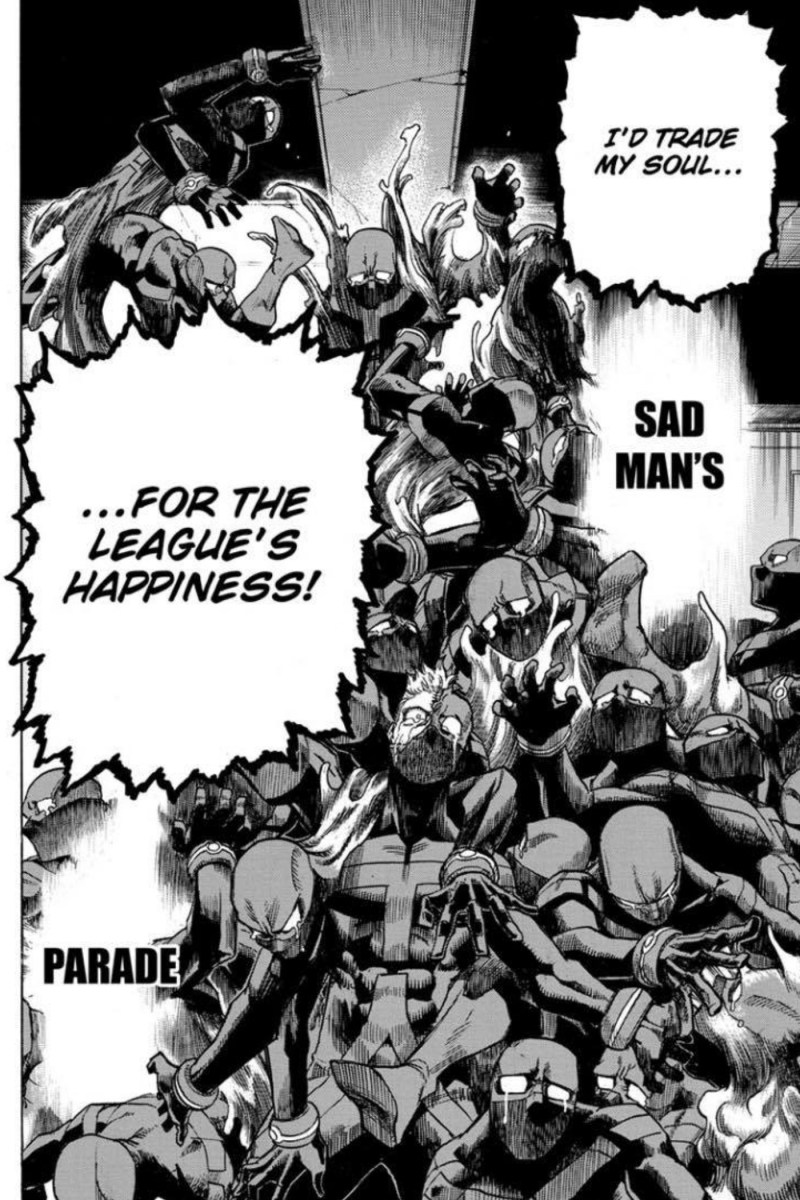 Even Hawks attests to this, going so far as to refer to Twice by his name (Jin Bubaigawara), which adds a more personal touch to the moment between them. Hawks knows exactly what he looks like right now and acknowledges that Twice isn’t a bad person. As we get more hints into Hawks’s backstory and knowing that the Hero Public Safety Commission recruited a CHILD to do this kind of dirty work, I get the feeling that Hawks knows that there’s plenty of people on the hero side who are questionable and truly does think that Twice is a good guy in a bad situation.

I still think it’s interesting that Endeavor had no idea what Hawks was up to this entire time. Like. The Hero Public Safety Commission really didn’t feel the need to let the number one hero know what was up? Even as Endeavor asks questions in the middle of the mission, he’s told that it’s classified information. He at least mentally acknowledges that he knows its Hawks, but it has to be beyond frustrating to be kept out of the loop, even now, when the battle is happening.

For the most part, this volume highlights the pros. The pages are dynamic, with splash images of heroes coming together, focus shots on new moves, and you really feel the weight of how big this moment is. This is a huge volume for Mirko fans, who also got a wonderful showing in the anime recently. We get to see her in action, leading to some really intense battle imagery from a woman who refuses to go down because she’s a hero, damnit, and she’s got a mission to fulfill. 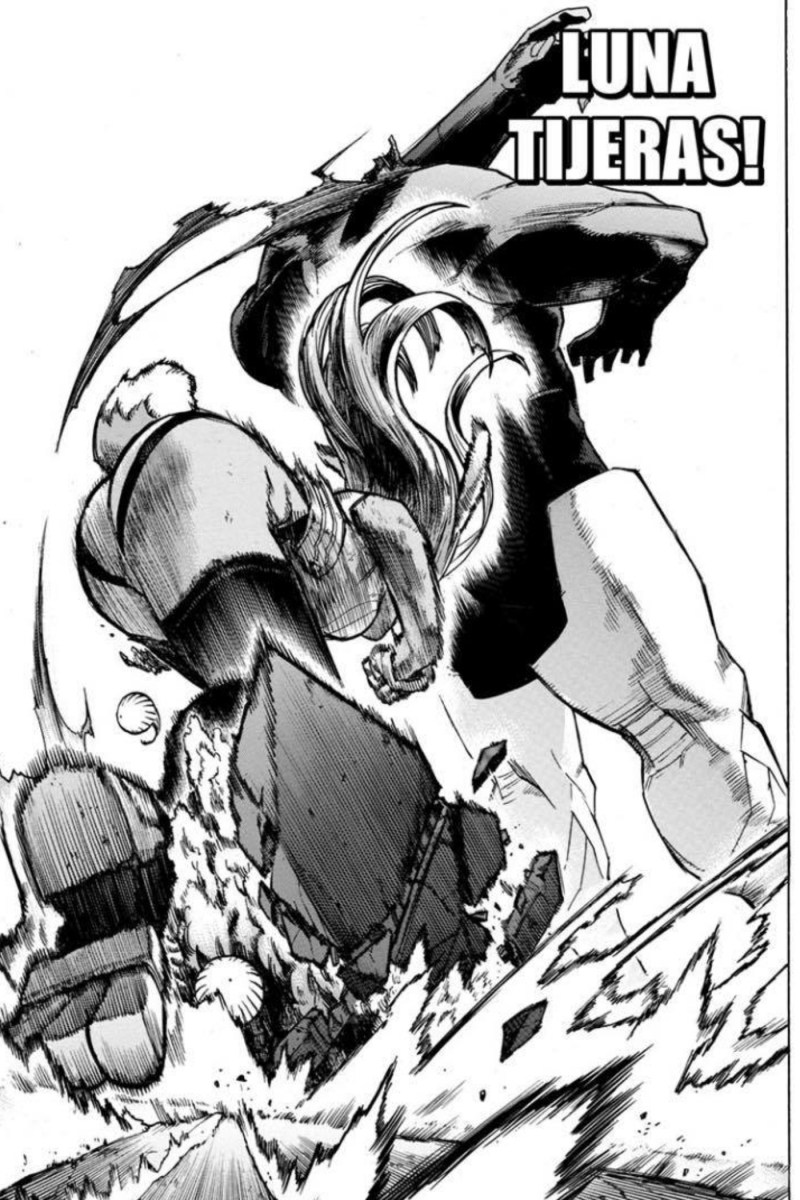 There are also some breakout U.A. students who, at the moment, handle things away from the major battles like Mirko vs. a pack of Nomu. That’s to be expected since these are still students, and while they are licensed to do hero work, joining in a war is a bit much.

Still, they find ways to put the students in places where they would be most useful. While I wish these kids didn’t have to take part in a whole-ass war so soon (these high schoolers have been through so much) it’s cool to see how they work with the pros. I like that not all the U.A. kids are gung-ho about this, and instead of being ridiculed, they’re comforted, because this IS a major situation to take part in during your second year of high school.

They SHOULD be nervous; it’s a WAR. 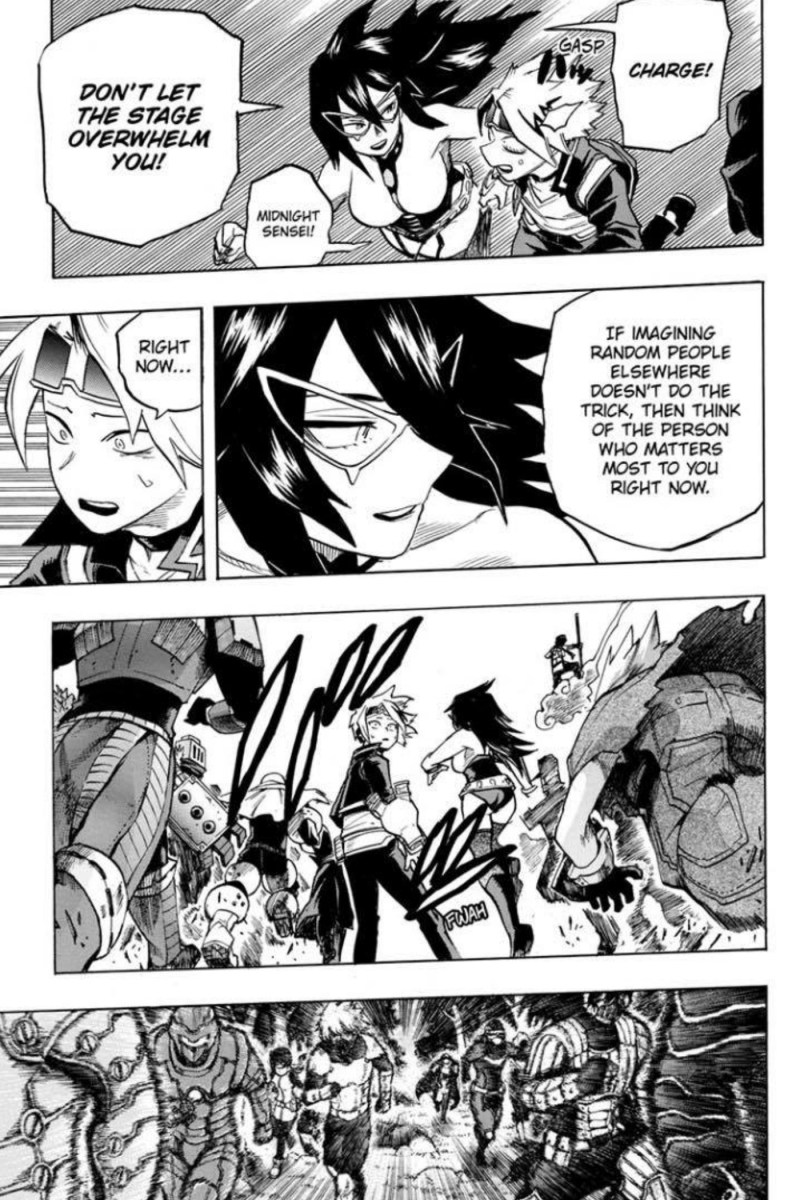 This brings me to something else about this series: It always manages to take me off guard. For example, I never expected All Might and All For One to fight so soon, and I certainly didn’t expect it to end with All Might winning (I thought he was gonna die, tbh, in classic “shonen mentor dies” fashion). I never expected Deku and Bakugo to hash things out so soon, so much so that they train together to help Deku get a handle on his quirk.

And I never expected a giant arc like this to hit in U.A. Year 2.

27 volumes is a lot of content, for sure, but having this “Avengers Assemble” grand battle feels very final arc or, at the very least, major turning point in the series. I expected something this monumental to happen when the kids reached their 3rd year. Horikoshi always keeps me guessing when it comes to figuring out where the story’s gonna go next.

He also continues to taunt me. There’s a part between Hawks and Dabi that’s SUCH a tease that I laughed out loud when I saw it. Again, since I read chapters weekly, I KNOW what this moment is, but sitting and reading the volume as a whole just reminded me of how Horikoshi clearly has a plan, and he has no problem in making us wait for those earth-shattering reveals.

Volume 27 of My Hero Academia was released today! You can check it out over at ViZ!

I’m also gonna drop this preorder link to Volume 28, which you’ll definitely want after reading this one.