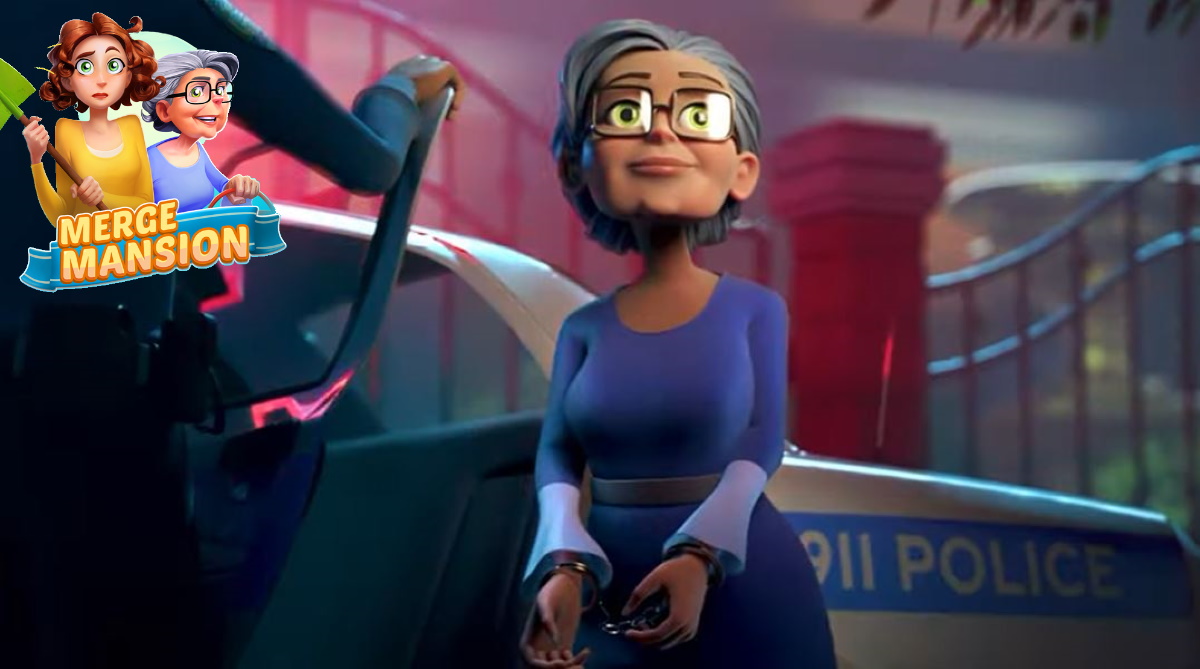 Mobile game advertisement walks the fine line between “this ad is for a game that doesn’t actually exist” and, “when did this merge-game become a 3-part murder mystery where grandma is the main suspect?!”

Merge Mansion from Finnish studio Metacore Games is the latter.

Absolutely cannot deal with all the twists in this game trailer pic.twitter.com/zSZgu9cbz8

In this particular ad (there are several, I’ll get to them) we see a young woman returning home from what I’m assuming was her wedding. Things don’t look like they went according to plan, though. She’s clearly been crying, and she isn’t returning home with a spouse.

She’s also not returning to a home, either, her house completely unsalvagable after a fire.

After having the worst day in recent merge-game history, she calls her grandma, who offers her comfort and a new home that’d be perfect for an HGTV series. This is where the gameplay mechanics come in. As you match together various tools you get to repair the woman’s new home just in time for her grandma to get arrested.

What kills me is how grandma doesn’t even look all that bothered? Maybe she’s holding it together for her granddaughter’s sake, or maybe she’s about to reveal some breaking news at 11. Again, since this is the beloved genre of WTF advertising for mobile games, it’s the latter.

With an almost wistful smile on her face, grandma gets into the back of the police car. Her granddaughter is understandably distraught, pressing her hand against the glass to have one last moment with the woman who took care of her during a difficult time. As the car drives off, grandma gives a rather ominous look to deliver a message via the writing on her hand.

At least that’s the message in this version of the ad. There’s an alternate take that makes grandma look even more suspicious.

The correct response to the sudden turn these game ads take is clearly this one:

You might be wondering what the actual plot of the game is at this point. Well, it’s nothing like this, I can tell you that much. Here’s the description via Google Play:

Maddie’s grandmother has something to tell. This mansion is full of stories unheard of! Help Maddie discover what her grandma has to reveal about the family’s adventurous past.

Wipe off the dust and find new items, merge them into useful tools and earn surprising treasures. You never know what awaits behind the mansion’s next corner.

Let the mystery adventure begin! Run a full home makeover, go ahead and decorate your house just the way you always wanted. Unlock new areas within and around the Mansion, unveiling decade old family secrets on the way. With an abundant combination of items to discover and hundreds of engaging puzzles to solve, the Mansion makes sure it always has new secrets waiting for you.

What’s hilarious is that the trailer on Google Play isn’t nearly as dramatic. It just looks like a simple merge game where you get to clean your house along the way. Even the features section is pretty chill (after the DISCOVER section that mentions grandma’s past):

DISCOVER – Be it a shocking twist in the Grandma’s past or a mysterious room in the Mansion cellar, there are always new things to look out for. Find the hidden areas of the manor and reveal the truth!

MERGE – Combine what you have into more useful tools. Can a rusty old shovel and a broken lantern come in handy? You betcha. Merge items and renovate a house in your special way.

DECORATE – Show us your house decoration talents. It’s your chance to become an exterior and interior house design pro.

RELAX – Good vibes only, although there are some twisted secrets ahead.

EASY TO LEARN – Even grandmas can learn a game this simple.

PLAY FOR A WHILE OR FOR LONG – Have a quick merge minute here and there, or become absorbed into an engaging merge marathon.

Good vibes only, huh? Those ads say otherwise, but then again:

You like twists? Wait until you play the game and realize it has nothing to do with this ad.

There’s also an ad where grandma ignores the call in favor of living her best life? So her granddaughter fixes her house her damn self so she can get her own pool???

Now you know we can’t end this piece on bonkers mobile game advertising without giving a shoutout to the queen of “that escalated quickly,” my girl Lily’s Garden.

She is truly a moment.