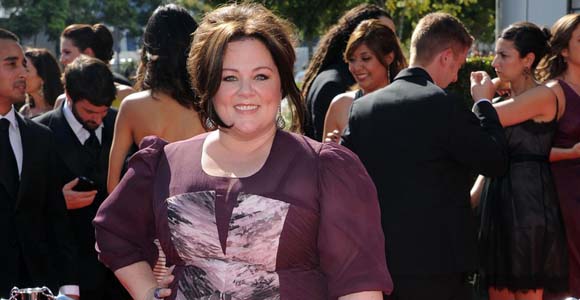 Comedian Melissa McCarthy recently responded to the vitriolic comments made by film critic Rex Reed towards her in a New York Observer review of Identity Thief back in February.  Where Reed was unnecesarily cruel, and stepped far beyond his role as a movie critic in his descriptions and condemnations of McCarthy, McCarthy’s response is classy and level headed. Via Jezebel:

In a soft voice, McCarthy said her initial reaction to the piece was “Really?” She then asked, “Why would someone O.K. that?”

Taking the high road, McCarthy added, “I felt really bad for someone who is swimming in so much hate. I just thought, that’s someone who’s in a really bad spot, and I am in such a happy spot. I laugh my head off every day with my husband and my kids who are mooning me and singing me songs.”

First of all, let’s all be collectively jealous of how fun McCarthy’s family sounds.  Now, though she shouldn’t have to be faced with such an offensive and hateful attitude to begin with, the Emmy Award winning actress’s response is perfect, and brings up some good points.  Her initial reaction, of “why would someone okay that,” is what really gets to me.  McCarthy points out, rightly, that there was more than one person involved in releasing such hateful comments into the world.  It seems that more people than just Rex Reed need a refresher in the object of a movie review, and a reminder of the basics of respect.  Criticizing an actor for their acting is one thing, but criticizing an actor for their physical appearance just perpetuates preexisting body image and representation issues in Hollywood.  Those issues are already something McCarthy has had to face all too often in her job.  Even recently, in a poster for Melissa McCarthy’s new movie The Heat, a buddy-cop comedy co-starring Sandra Bullock that comes out June 28th, the actress received some truly disturbing photoshop work on her head.

Obviously criticism is an inherent part of movie critiques.  Reed started his review comparatively reasonably, by critiquing Identity Theif itself as “trashy, stupefying” and a “chunk of junk.”  However, he crossed the line from unfavorable review to personal attack by describing McCarthy as “cacophonous, tractor-sized Melissa McCarthy,” and later as a “female hippo.”  Reed ended the review, which you can see here, by targeting McCarthy yet again, saying she “has devoted her short career to being obese and obnoxious with equal success.”  While I have included Reed’s comments for context, it’s more important to focus on McCarthy’s response to them.  Her happiness and success despite such hatred is what I’m taking away from the story.