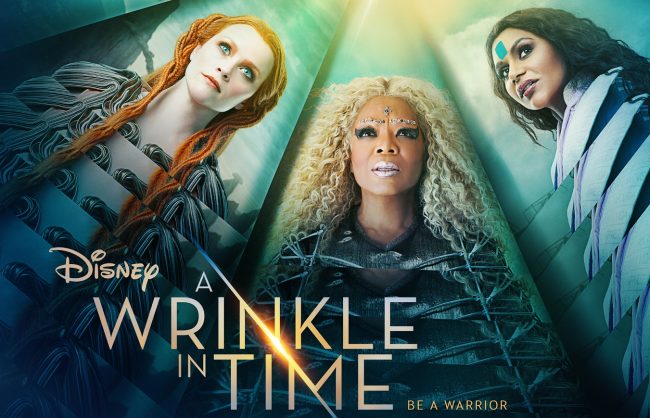 [Warning: This post contains slight spoilers for how the A Wrinkle in Time movie will differ from the book.]

Collider recently spoke to Jennifer Lee, who wrote the script for Disney’s upcoming film adaptation of Madeleine L’Engle’s A Wrinkle in Time, about the process of preparing the book for the big screen. L’Engle’s book has often been cited a difficult text to adapt, for a number of reasons, so both Lee and director Ava DuVernay had their work cut out for them in translating it to the big screen.

Lee was excited for the challenge from the start, though. “I went after it,” she told Collider. “I heard they needed a writer. I had just finished Frozen, and I got permission from animation. I said, ‘I need to write all the time.’ I was helping on other projects, but I didn’t know what I was doing next, and they completely supported me … They embraced it and gave me a chance. I was so grateful.”

Once she’d passed off the script, Lee also got to collaborate closely with DuVernay to create the world of the film and make it work—but initially, she’d assumed her role was finished. “I joked, ‘I’ll be done with Wrinkle soon ‘cause they’ve got a director now who’s also a fantastic writer,'” she said. “I had this emotional moment when I met her, and we had this great conversation. I felt like I was giving it over to good hands. I had complete faith in her, but I thought that would be it. I really thought she would just want to take it, but she didn’t. She said, ‘I want to work with you.'”

“There were things I brought to it that were in my comfort zone, but weren’t in hers,” she continued, “particularly in the science of it and my relationship to the book. She sat down with me and went through all the things she loved and the things she was interested in doing with it, and I could see it. There was a lot of back and forth, and tons of conversations. What I loved is that she challenged me and said, ‘Can you write a scene that disproves Einstein’s Theory of Relativity?’ and I was like, ‘Sure!’ Fundamentally, I knew what she was asking. And then, we got together with a physicist, and Chris Pine joined us, and we talked through the real physics inside tessering and the tesseract.”

“I felt like she made me a better writer,” she continued, “and I felt completely comfortable handing everything other to her and seeing what she could bring to it. It always made it so much stronger. It was one of the best collaborations for me.”

There was one change they made to make, however, that Lee was a bit bummed out about: cutting Aunt Beast. “She was there until the very end,” Lee said. “Maybe she’ll show up in the DVD. It was the right thing for the film version. Meg needed to walk into the It’s lair without support. Aunt Beast was a part of the book that provided support, but she also provided the answer. This was a journey we reworked, where no one is gonna give Meg the answer. She has to find it herself.”

“That’s the difference between what the film is versus the book,” she continued, “and the choices we made that evoke the film, but also look at what the film needed to be. That was the only one, just ‘cause she was one of my favorite characters. But in the end, when I saw it after the cut – and we had it with and without – I got why.”

A Wrinkle in TimeJennifer Lee