This Robot Can Help Kids Through Chemo, Vaccinations & Other Scary Medical Procedures 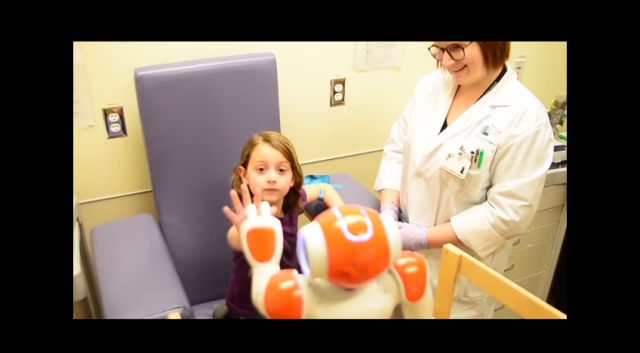 Robots are helping us do a lot these days but as an adult who had far too many needle experiences in her childhood, I’m certainly wishing this one was invented sooner. Say hello to MEDi.

MEDi, short for Medicine and Engineering Designing Intelligence, has come a long way since trying out Tai Chi back in 2012. The robot, part of a project led by Tanya Beran, a professor of community health sciences at the University of Calgary in Alberta, was created to comfort children through medical procedures. Watch it at work:

Can I get one just to hang out with? It seems pretty cool.

Beran headed a study that observed 57 children of varying ages. Each was randomly assigned a vaccination session with a nurse, who used the same standard procedures to dispense the medication. In some of those sessions, MEDi used cognitive-behavioral strategies to assuage the children as they got the shot. Afterward, children, parents, and nurses filled out surveys to estimate the pain and distress of the whole shebang.

The study, published in the June 2013 issue of Vaccine, found that those kids who had MEDi by their sides during the procedure reported much less pain than their robot-less counterparts.

MEDi, which is now available for hospitals to purchase, comes with facial recognition technology (it will remember a child who’s in for frequent visits), can speak 20 different languages, and is able to adapt to the particular situation it’s put in. But it will cost a pretty penny. Yahoo writes, “Though MEDi’s body — made by Aldebaran Robotics — retails for $9,000, the applications required for him to aid in medical procedures bring that total to anywhere from $15,000 to $30,000, depending on what the staff wants him to do.”

In my opinion, it’s worth it. The piece goes on to note Beran is still working on MEDi “so that he has routines for procedures that parents aren’t always alloweed to be in the room for. These range from blood transfers to surgery to chemotherapy.”